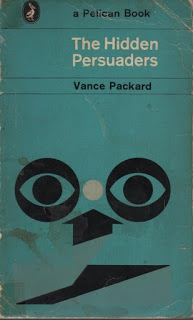 This interesting, and in part entertaining, critique of a now not so new approach to advertising has recently been added to the Penguin catalogue. Although this one short book obviously cannot, and indeed does not attempt to, deal more than very superficially with the subject (as well as revealing Mr. Packard’s obvious bias) it contains much useful information and some pertinent comments.

Motivation research invented and pioneered by people like Dr. Ernest Dichter (President of Motivation Research Inc.) and Louis Cheskin (Director of the Colour Research Institute of America) as early as the 1930’s, has been developed since the second World War, and really became established in the early I950‘s. Even today those who are most enthusiastic admit that “M.R.” is only in its early stages.

What is M.R., and how does it help in advertising? Briefly, it could be explained as “selling to the subconscious that is, finding people’s hidden weaknesses, wishes and frustrations, and exploiting these in order that, to meet expanding production, they can be persuaded to buy more.

Different experts favour different methods of M.R., the best known of these is the “depth interview.” For this individuals or groups of people taken from a cross section of the population are led in discussion by experts, having first been put in a relaxed state of mind either by hypnosis or the administration of a special drug. It is claimed by advocates of this method that. “when their defences are down,” people reveal secrets to which they would not admit under normal circumstances.

M.R. is used not only in persuading the consumer to buy more. Public relations experts can be found advising churchmen on how they can become more effective manipulators of their congregation, business concerns of their employees and politicians of their voters.

By the mid-fifties both major United States Parties had become deeply involved in the use of professional persuaders. In early 1956 “Nation’s Business,” published by the Chamber of Commerce of the United States, proclaimed: “Both parties will merchandise their candidates and issues by the same methods that business has developed to sell goods. These include scientific selection of appeals, planned repetition. . . . Candidates need, in addition to rich voices and good diction, to be able to look ‘sincerely’ at the TV camera.” This method of ‘selling’ was used to such an extent at the last but one Presidential Election that Mr. Adlai Stevenson said: “The idea that you can merchandise candidates for high office like breakfast cereal . . . is the ultimate indignity to the democratic process.”

As Socialists are not surprised that those in control under the present system are constantly trying to think of new ways to persuade us (quoting Christianity and Crisis, an American Protestant publication) ‘‘to consume, consume and consume, whether we need or even desire the product almost forced upon us . . . to consume to meet the needs of the productive process,” to accept their ideas, religion and leaders.

Although at present the use of M.R. in the United Kingdom is negligible, it will certainly increase. The Observer may have had this in mind when featuring Dr. Dichter in their “Profile” a few weeks ago.

Mr. Packard in his final chapter quotes Clyde Miller in his book The Process of Persuasion: “When we learn to recognise the devices of the persuaders, we build a ‘recognition reflex.’ Such a recognition reflex can protect us, not only against the petty trickery of small time persuaders operating in the commonplace affairs of everyday life, but also against the mistaken or false persuasions of powerful leaders. . . That, surely, is a good thing for all of us to bear in mind when listening to the utterances of those who “lead” us today.