Are you fond of literature and music? Would you put your wife and children 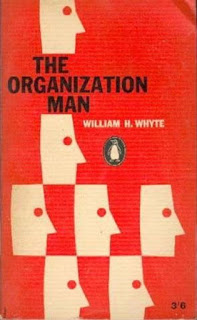 before your work? Do you feel unhappy about the way society is organised?

Yes? Then it’s unlikely you’ve the makings of a good Organisation Man—one of the fast-expanding army of junior and middle managements men in American Big Business.

William H. Whyte, an American journalist with an interest in sociology, puts him under the microscope in The Organization Man, published by Penguin Books in a 3s. 6d. edition. He reveals a picture of co-operation with conformity.

The typical O.M., a college graduate with a strong technical bias, sinks his individual identity into the group. He thinks, talks and acts like the collective. “Don’t question or query things, accept them; be technically efficient, co-operate with the Company, and you’ll be looked after” is the philosophy peddled by his “benevolent” boss.

At work, he trains as a “dedicated” specialist in a team of “ dedicated ” specialists, toes the Company line, and wins promotion through personality tests—”Do yon agree foreigners are dirtier than Americans”?—designed to determine his ability to integrate himself in the Organisation.

At home, a mortgaged-to-the-hilt house in a “model” suburb, he and his wife participate actively in local affairs and just about make ends meet on a perpetual overdraft.

Whyte is worried about the O.M.’s loss of individuality; he calls it “a surrender to dehumanised values.” He’s worried, too, about the growing emphasis on specialisation at the expense of a broad, liberal education.

But both factors are not peculiar to American capitalism, or, for that matter, to Big Business.

First, unorthodox thought which questions the social system has never been popular with capitalists anywhere, be they large or small. And today the bigger capitalists in Western Europe, as well as America, strive to sidetrack criticism of the system among their executives with the carrot of Company cars, expense accounts, special allowances and top-hat pension schemes.

Second, scientific and technological skills are of vital importance to the advanced industrial nations in their cut-throat competitive struggles. A knowledge of higher mathematics produces more profits than a knowledge of Greek mythology.

Whyte urges the O.M. to fight back, but “not selfishly or stupidly,” and certainly not with the aim of changing society. Like every reformer, he has no real quarrel with capitalism which breeds conformity and an education system shackled to the profit motive.

He has yet to understand that only in a society liberated from the profit motive can man develop his individuality and knowledge to serve the common good.