Thinking to Some Purpose, by L. Susan Stebbing. Penguin Books (2/6). 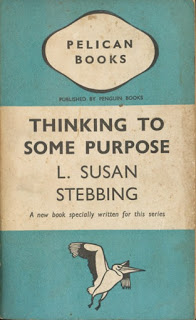 Do you know what special pleading is? Would you recognise a syllogism if you saw one? Do you realise the fallacies that may lie behind an “average” figure?
If you arc a Socialist—reading, discussing, arguing about Socialism—you will know how necessary it is to be able to detect fallacies in your opponent’s arguments. And, for that matter, in your own. Thinking to Some Purpose will enable you to recognise immediately all the most common fallacies. It gives the groundwork of logic, put in simple, straightforward terms.
Special pleading, for example. This arises when someone makes an assertion that apparently applies to everyone, and yet clearly it is never intended to apply to the speaker. The speaker, in other words, makes an implied “special plea” in his own favour.

You may hear a person who lives on a large inherited income complaining that the “dole” given to the unemployed “pauperizes” them by giving them the means of subsistence without working for it. Or, again, wealthy people sometimes argue that, if higher wages were paid to bricklayers and miners, for instance, they will only spend the extra money on amusements, such as the cinema and football pools; yet these same people may defend their own expenditure on amusements and luxuries on the ground th
at they are giving employment.

Miss Stebbing also quotes the well-known example of special pleading from Archdeacon Paley’s Reasons for Contentment addressed to the Labouring Part of the British Public, part of which runs:

But no man can rest who has not worked. Rest is the cessation of labour. It cannot, therefore, be enjoyed, or tasted, except by those who have known fatigue. The rich see, and not without envy, the refreshment and pleasure which rest affords to the poor, and choose to wonder that they cannot find the same enjoyment in being free from the necessity of working at all.

Archdeacon Paley is saying here, in effect, that a poor labouring life is (for various reasons) a good thing; but at the same time he enters an implied “special plea” on behalf of the rich, since obviously these arguments are not intended to apply to them. As Miss Stebbing says, the poor “may have found it difficult to believe that the rich, who showed no eagerness to become poor, were in fact envious of the conditions imposed by poverty.”

To come to the second of the questions at the beginning of the article, a syllogism is a group of three statements, of such a kind that if the first two (the premises) are true, then the third (the conclusion) must also be true. For example:

One of the reasons why one should be able to recognise a syllogism is that it enables one to see what isn’t a syllogism. We have all heard arguments like this:

I read in the paper that John Jones had knocked down an old woman and stolen her money.John Jones is a negro.Therefore all Negroes knock down old women and steal their money.

When written out in this way, the argument is obviously absurd. But it is on this level that very much political argument is carried on, and one has to be prepared to see it for what is is, and to counter it.

As for averages, it has to be remembered that while they are useful in summarizing information in some cases, in others they may well mislead. Suppose, for example, that in one group of eleven people, ten received £500 a year, and one £5,000 a year. It could be concluded that they all had enough to live on, because the average income of these eleven people is over £900. But, of course, that would be totally misleading. The average used here is what is called the “arithmetic mean”—that is, the figure obtained by adding up all the items in the group and dividing by the total number of items. A much better idea of the realities of the situation could be obtained by taking the mode, that is the item in the group that occurs most frequently, or the typical representative of the group. In the above group, the mode income is £500 a year, since ten of the eleven people in the group receive it. But very often the newspapers or political speakers use the arithmetic mean where the mode would be more appropriate, to try to prove, for example, that we “all” spend fantastic sums per week on tobacco, or drink, or gambling, and that therefore we must “all” be very well off.

Miss Stebbing covers all these and many other points of logic. She was not a Socialist. But she wrote a book which will be read with profit by anyone who wishes to train himself to think clearly.