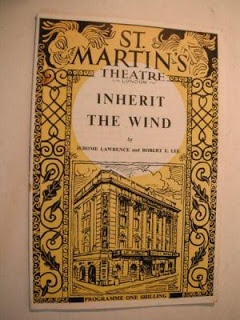 In July, 1925, at the town of Dayton, Tennessee, a school-teacher was charged under a State law with teaching the Darwinian theory of the origin of man instead of the story in Genesis, as the law demanded.
The case was defended by the great liberal lawyer Clarence Seward Darrow, who was famous for defending many workers in cases that had arisen through their Trade Union struggles; a man who was by many derisively regarded as the friend of criminals, because he considered that society was to blame for their actions, being responsible for not only making men into criminals but also for defining at any time what was criminal and what was not, according to its own interests and prejudices.
Jerome Lawrence and Robert E. Lee have taken the case of the Tennessee schoolteacher John Scopes, and made it the basis of their play Inherit the Wind, which had a regrettably short run at the St, Martins Theatre. The play is not an actual report of the trial and the authors have changes the names of the participants, so that what we have are the essentials of the case and its conflict. This conflict is between the cant and superstition of unsophisticated religion and the enlightenment of “atheistic” science and is played  against the background of the American Middle West with its particular pioneer traditions of suspicion, intolerance and isolation, which looked upon science not only as an encroachment on its religion and a device of the Devil, but as a threat to its way of life.
The Legislature of the State of Tennessee had laid down that it was unlawful for any public teacher “to teach the theory which denies the story of the divine creation of man as taught in the Bible and to teach instead that man has descended from a lower form of animals.”* It is also of interest to note that similarly, the State Legislature of Florida had declared it “improper and subversive of the best interests of the state for any public teacher to teach as true Darwinian or any other hypothesis that links man in blood relationship to any other form of life.”*
It was against thinking of this kind and every obstacle that could be put in his way, including the refusal to allow the testimony of eminent biologists, and the prosecution’s able lawyer, William Jennings Bryan, that Darrow had to fight in his defence of John Scopes. Bryan was a man who held “firmly with childlike faith to a literal interpretation of the Bible,” who was “hostile to the teachings of biological science which he had never had the inclination to study.”*
Darrow was moved by his abiding interest in science and his deep commitment to freedom of thought to volunteer to defend Scopes. He was in fact “of an astonishing variety of intellectual and social currents: skepticism in philosophy and religion, determinism in psychology, evolution in science, realism in literature, a farrago of socialism and anarchism in politics.”*
The outcome of the trial was a farcical compromise to save the face of the community, forced by Darrow’s brilliant defence and the weight of American public opinion. The teacher John Scopes was simply fined a nominal sum.
So far as Bryan was concerned, says the American Dictionary of National Biography, “the trial only revealed the naivete of his religious faith and his want of familiarity with the trend of biological science.” Already an old man, the strain of the trial brought him to his death five days later.
Inherit the Wind conveys with a fair degree of authenticity the setting and atmosphere the trial, though the ending of the play is spoilt by anti-climax. The authors have conceded a point to the prevailing public morality, giving the impression that it is not religion itself that is questionable but merely fundamentalist religion; which is false not only to Darrow and to science, but to the spirit of the play also. Nevertheless, the play is not only good theatre, but a refreshing reminder of the gradual retreat of religion (and other fetishes), which makes our Socialist task that much easier.
Ian Jones
* American Dictionary of National Biography.