Two months after their smashing victory, how are the Tories shaping? Mr. Macmillan, all smooth hair and confident smiles, had a winning line for his campaign. Everything was O.K., we were all doing well—why muck it up? Just a little more patience, a little more effort and (most essential) another five years’ power for the Tories, and that happy world of boundless prosperity which we have been tempted with for so long would be a reality. That was the promise. And the fulfilment?
Queen’s Speech
As usual the government announced their immediate programme in the Queen’s Speech. They are going to do something about building societies, to try to clean up shady deals like the Jasper affair. A lot of workers think that this is a good idea, although they do not own a single share in a building society and only deal with the societies because they hold a mortgage on their home. Perhaps the government are worried by the row which the Labour Party kicked up during the election about Mr. Jasper. And, of course, governments always prefer the business of capitalism to be run in accordance with the rules. But we can be sure that as fast as one shady loophole is plugged another will appear: and the only people who are ever interested to use the loophole are those with enough money to make large investments and to dabble in take-over bids and the like. Which excludes, most of the people who voted for the Tories.
During the election, both of the large parties tried to prove that the other was indifferent to the plight of the old age pensioners. Mr. Macmillan talked about the old ones sharing in prosperity. Yet all the government now offers is a measure to enable pensioners and widowed mothers to earn more without having their pensions cut. Not a general rise in pensions. Not even the end of the earnings rule. This is typical of the stingy attitude which always dominates policy on pensions. Afraid to give retired workers too much, every government, rather than a large general increase, has preferred to play with niggardly adjustments. The Labour government had their tobacco tokens; the latest measure is in this tradition. Workers who are attracted by such schemes ignore a vital point. No capitalist ever worries about a pension. Whether it is high or low, his livelihood is assured by his ownership of stocks and shares; there is no earnings rule on his dividends. The only people who need worry about the size of pensions are retired workers, who have suffered poverty during their working life and who know outright distress when old age forces them out of their job.
Betting and Gambling
Perhaps the most newsworthy legislation of the new government will be the amended betting and gaming laws. On the evening of November 4th the B.B.C. interviewed some people in Birmingham, where races had been run that day. Some colourful opinions were expressed on the legalising of betting shops and other forms of gambling. Nobody mentioned the Stock Exchange, where even the Church of England could always back its fancy. And nobody touched on the reason why workers gamble. Depending on a job for a living is unpleasant. Above all, it is an insecure business. Some forms of gambling offer a chance—albeit a small one—of winning enough money to ensure a plentiful and secure life. Churchmen and others may denounce those who take this chance. But who can be blamed for wanting to change a council dwelling for a decent house? Or cheap, mass-produced clothes for some which fit and are made of good cloth? Who doesn’t want to be free of insecurity? The great tragedy is that so much effort goes into trying to gamble our way out of poverty instead of looking for something less chancy.
The Labour Party did their best to pick holes in the Government’s programme without ever suggesting that they would have been much different. After all, their big vote-catcher was supposed to be the promise on income tax and purchase tax, which would have meant, at the most, a few shillings a week to the wage-earner. Which is roughly what the Tory promises meant. Labour is very worried about its lack of appeal, for the party fought a skilful campaign yet took a beating. Nobody seems to like nationalisation very much and at least one of their prominent men wants to change the party’s name. Mr. Gaitskell was not to be drawn until the party’s conference late last month. The Guardian of November 5th, said that “. . . he was not ready at present to declare his mind . . . ” on the proposal to drop nationalisation from the Labour Party programme. What a change! Once, the Labour Party swore by nationalisation as an instalment of Socialism. Now that it is thought to lose votes, it may be forgotten. Whether or not this happens is not very important. What does matter is that nobody should think that nationalisation has anything to do with Socialism, nor that if the Labour Party drops it they are becoming less of a Socialist organisation. For nationalisation is but a reorganisation of capitalism, which the Labour Party have always busied themselves with. 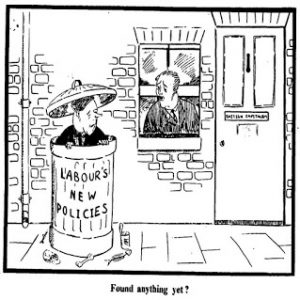 Can the Labour Party revive and come to power again? Or will the Tories keep on winning elections? These questions need not worry members of the working-class, who will always have the problems which capitalism dumps on them, no matter which party happens to be running the system. Earl Attlee’s government told us many times that our troubles would be over if this country could eliminate its trade deficit with the U.S.A. Well, last month Mr. Macmillan’s President of the Board of Trade announced considerable relaxations in the restrictions on imports of goods from the United States. He was able to do this because, as The Guardian of Nov. 5th said Britain “. . . recently had a trade surplus with the United States for the first time in nearly a hundred years.” Yet the promised land is as far away as ever. Still, to get a few shillings a week on their wages, workers often have to strike—and sometimes find that the rise they have won is swallowed by increasing prices. And why would they need to fight for a rise, if they were all so prosperous?
Even so, the majority of the working class are satisfied with capitalism. Certainly, for the Tories every prospect seems pretty pleasing. The Government appeals all set for smooth passage, with suave Captain Macmillan to steady the helm and to see that none of the passengers are seasick. Yet who dare say that storms are not ahead? Mr. Macmillan’s would not be the first administration, initially confident, to be wrecked by a capitalist hurricane.
Ivan.