Call The Doctor. By E. S. Turner, (Michael Joseph, 21s.)
In an age of X-rays and artificial kidneys, there is no excuse for anybody 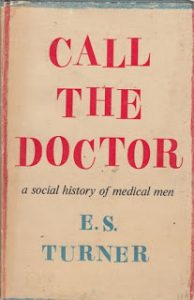 thinking that the stomach is an oven where food is cooked by heat from the liver. No doctor now prescribes the gall of a bull mixed with vinegar, or wine made from six live vipers. Yet this, apparently, once passed for medical science. At this distance, it seems incredible that the patients stood for it; we can only hope that we are less gullible today.
Quacks
The book starts as it intends to go on, shocking us with the Salerno rules for the mediaeval physicians; (“When feeling the patient’s pulse, allow for the fact that he may be disturbed by your arrival and by the thought of the fee you are going to charge him”). It tells of the vogue for revolting medicines and antidotes, one of which—the bezoar stone—was discredited by trying it on a criminal after giving him a large dose of corrosive. The wretched man was found crawling like an animal around his cell, with blood streaming from every orifice of his body. There is the story of the quacks, (“The cheapest and safest Way of bringing forth ye Venom of ye Secret Disease .. . Sold by J. Sherwood, Bookseller”) and the bodysnatchers, who supplied the doctors of the 18th and 19th centuries with their subjects for dissection. For hundreds of years, the physicians fought the over-indulgence of the well-to-do by drawing off rivers of their blood and administering tons of violent purgatives, and probably committing vast slaughter in the process.
Mr. Turner has a lot of surprises for us. Who knew that The Lancet was founded as a truculent rebel journal, which earned the disapproval of the Royal College of Surgeons by revealing the substance of medical lectures and reporting horribly bungled operations? Or that, before the day of anaesthetics, surgeons worked so fast that some could amputate a leg in the time taken to sprint a hundred yards? The operations were particularly gruesome—as late as the 1890’s, the surgeon wore a frock coat which he kept behind his theatre door and which was sometimes so stiff with blood and filth that it could have stood up on its own. Equally sickening is to read about the ignorance of the sources of infection. About the doctor who carried in his pocket some remains from the abdomen of a woman lately dead of childbirth fever—and wore the same clothes when attending later confinements. Sometimes the doctors were reluctant to change their ideas. Here is plenty of ammunition for those who think the medical profession has always been an obstinate, unprogressive lot.
Disappointment
Yet when we have recovered from our disgust and surprise, what is there in this book? A little disappointment; the subtitle—A Social History of Medical Men—is hardly justified. There is no suggestion that the medical and surgical advances of the 18th and 19th centuries were related to the achievements of the Industrial Revolution. The 1914-18 war, one of the great disruptive social influences of the 20th century, gets a couple of paragraphs. Could it be that too much—over 500 years—is crammed into too little—just over 300 pages?
To satisfy Socialists, Call The Doctor must have pointed out that medical science cannot be excepted from the principle that our knowledge expands with the development of society’s wealth-producing capabilities. That modern medical research and techniques reflect —and are made feasible by—the advance of modern industry. Anaesthetics could not have happened without the Industrial Revolution and it is hardly necessary to say that machines like the iron lung can only be made in a factory. The introduction says that the book is limited to an examination of the doctor as a member of society. Yet it ignores the influences which make society what it is.
Doctors and Patients
What position does the doctor hold in society? Although most of them would not concede it, they are members of the working class, compelled at times to defend their material interests. Twice during the past 50 years—in the National Insurance Bill of 1911 and the National Health Bill of 1948—the government has imposed changes on the doctors’ working conditions. On each occasion, amongst the clouds of nonsense which they talked, the medical men could be descried resisting anything which they thought would lower their standards. Mr. Turner recalls the words of one doctor who opposed the 1911 Bill: “. . . we have a commodity . . . and we are practically monopolists of that commodity . . . are we going to demand a fair price for our services?” No shop steward could have put it better.
And the patients? Mr. Turner says, on the old Poor Law days,

Among these were consumptives in crowded dwellings or sunless valleys, and workmen discarded by the industrial machine with their inner economy wrecked. What they needed was what no doctor could supply: food, fresh air, decent houses. All the practitioners could do was palliate their lot or give them illusory hope with bottles of cheap medicine.

Nowadays we are all on the National Health and some of the diseases which took their toll in the Poor Law times have been suppressed. But others have taken their place and always the effort to cure them is complicated by the fact that the majority of patients are compelled to work for their living.
Overwhelming Question
If, after the centuries of trials and spectacular errors which this book relates, the medical men are at last getting to grips witth their problems, we are leftivith one overwhelming question. How much more effective would they be, in a world free from social disease? ,
Ivan