It is a sad thought that, after several years of bad health, Clifford Groves is now 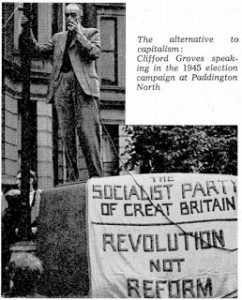 dead at 52 years of age. Following the death of his wife, Ivy, also a member, he was taken into hospital with little hope of recovery. Comrade Groves’ family were Salvationists and during his boyhood he was taught the trumpet. As his mind matured he broke away from religion and, taking his trumpet with him, he used it to augment his wages by playing in a jazz band in good New Orleans style. Then he parted company with the trumpet for the mind-awakening blasts of Socialist propaganda. His experiences working in company offices and on the “road” as a firm’s representative (“high-class hawker,” to use his own description) made him more and more critical of the morality of the buying and selling of commodities until, in this frame of mind, he chanced to listen to Party speakers. Discussions with Party members ensued which not only did much for him but for the Party members also, for Groves possessed a very critical and ordered mind together with a somewhat caustic wit. Consequently Chiswick Branch members were soon polishing up and improving upon their own knowledge. He joined Chiswick in 1933 and shortly afterwards met Adolph Kohn, an outstandingly able propagandist and, in his own works, he “became Kohn’s pupil” and studied hard and long. He was soon speaking for the Party on the outdoor and indoor platforms and developed an excellent manner and clarity of expression that was a joy to hear. Some will recall his pre-war lectures on the “Popular Front” in France and, later, on the “Beveridge” Report and Family Allowances (the Party pamphlets on both these subjects were written by him).
As he developed, he became in demand as a Party representative in debate and was, at all times, calm and unruffled, even under the most trying conditions, giving of his best whether to a small audience in Cambridge or a “full house” at Kensington Town Hall. Later he became General Secretary and, in 1945, was nominated as our candidate at Paddington North in the General Election. Here, with many other Party members, he gave of his best in what, to many, was the best election campaign the Party has undertaken. (He also represented the Party in the by-election in 1946.) In 1949, signs of ill-health began to appear and, although he resigned as General Secretary, he continued on the Executive Committee for a few more years.
Few knew Groves well, but those of us who did, knew him to be a modest man and, in some ways, a shy one, who freely acknowledged the help that he had received from other Party members. To him the struggle for the establishment of Socialism was the only work worth while and represented his sole interest.
In concluding this salute to a very able propagandist for Socialism, it is appropriate to mention that, in large measure, his work was only made possible by the great help he received from Ivy, his wife, who, throughout the years took over practically all their domestic worries and responsibilities, leaving him free to carry out his Party work.
Phyllis Howard and Arthur George