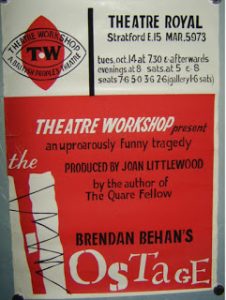 The Hostage by Brendan Behan (The Theatre Royal, Stratford)
The Theatre Royal. Stratford are at present serving up an intriguing pot pourri of entertainment in the form of a new play by Brendan Behan. The theme of “The Hostage” is the Irish Republican Army, and its action takes place in a dingy boarding house in Dublin. The “Hostage” himself is a young cockney soldier, kidnapped and held captive, with the probability of being shot if an I.R.A. prisoner under sentence of death is not reprieved. The Theatre Royal company put it across with vigour and exuberance. They have that rare quality of acting with the audience rather to it.
A tragedy? Well, hardly. The play is a bawdy, noisy piece of cynicism, often chaotic, even more often extremely funny. Characters are crowded onto the stage without ever overcrowding it. The boarding house and its colourful and at times macabre inhabitants are presided over by a veteran from the playing fields of old England, who at some stage in his career caught a violent aversion to all things English. His caretaker is a survival from the more vigorous bomb-throwing campaigns of yesteryear. Morosely humped over a table of Guinness bottles he bemoans that the I.R.A. has lost its excitement now it has become serious and dedicated. Many of the scenes between him and his wife bring an atmosphere of the music hall into the production. There are several gay. ribald songs, sung with great enthusiasm by various members of the cast. The play ends in a babble of noise and frenzied confusion, during which the hostage is accidently killed by one of the boarders.
Mr. Behan really hits out at the I.R.A. and for good measure takes a sideways swipe at practically everything in his path. He rarely misses. Perhaps that is the trouble with the play. It is easy enough to make fun of peoples’ misguided activities, and if that is his motive he does it entertainingly. But his gibing never probes below the surface. Mr. Behan takes his people at face value and holds them before us for our ridicule. Never does he enquire into the emotional feelings that inspire people to join such organisations. Never does he enquire into the reasons for such feelings. He should know them. As a member he once shared their hardships, and presumably their beliefs. The play is no doubt an expression of his disillusionment with the I.R.A.
Brendan Behan may believe that underneath our various national labels we are all just human beings. No one in the boarding house really wants the cockney to be murdered in reprisal for the I.R.A. prisoner. The hostage even finds the opportunity for a fleeting love affair with the young Irish maid of all work. Nevertheless, we are left with the impression that Nationalism is all great fun as long as it does not get out of hand and lead to armed violence and murder. But this is the usual result of intense Nationalism, and the I.R.A., as well as Cyprus. Malaya and other places, is a grim reminder.
Brendan Behan may have realised the dangerous futility of Nationalistic organisations, but what of the people he writes about? They do not appear to share his disillusionment, and here lies the real tragedy. Nationalism is one of the greatest barriers to the establishment of a society based upon common humanity. It is a pity this side of the subject was excluded from the play. The characters are really caricatures, both tragic and comic, but only the latter side is shown.
On the whole it is rather naive and one wonders what Mr. Behan for all his fiery Nationalistic activities has really learned himself.
J. H.