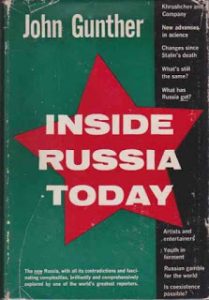 The author of this book (published by Hamish Hamilton, 21s.) is too well known to need introduction, and his list of books giving inside information, such as Inside Europe, Inside Asia, Inside U.S.A., have had wide circulation. We in the Socialist Party are, of course, especially interested in Russia because of the many claims that the system of political economy is that of Socialism. We deny it and say that Russia is not Socialist, never was Socialist, will not become a Socialist land until the mass of the people understand and want Socialism. But let us look at Gunther’s book and see what he finds in Russia.
On page 30 Gunther writes: “Several times in this book I shall seemingly contradict on one page what I have said on another. Anyway ‘How much Socialism remains, if any?’ ” He poses the question, but does not answer it. He tells us on page 25, “ The U.S.S.R. . . .  contains 15 different republics, and is the world’s first Socialist State.” So Gunther thinks, or apparently thought, when he started his book that Russia was Socialist.
Gunther’s views on Marx from page 182: “Marx could have had little relish for the stupendous State Capitalistic structure that identifies itself as Marxist under Khrustchev and company. I do not think he would be happy at much that he saw, particularly in the line of Soviet betrayals of his original egalitarian ideals. Marx irremediably changed the face of Russia, but also Russia changed the face of Marx.” How Marx changed the face of Russia Gunther does not say—presumedly he imagines that he has changed Russia from a Capitalist to a Socialist land. By Russia changing Marx, again he does not state how. They—the Russians, have certainly betrayed Marx’s teachings. However, he now maintains that Russia is State Capitalistic with which we could agree; so it is not the world’s first Socialist State!
On page 182 he writes: “By scientific Socialism Marx meant attainable Socialism, as soon as possible.” Where Gunther obtained this idea he does not state— perhaps he got it from the Russians, and this is really offered as a sample of how Russia has changed Marx.
On page 185 he writes: “By crude definition Marxism is a philosophy; Leninism is Marxism applied to government in Russia.” Why he wants a crude definition he does not say, at all events he has the idea that Marxism has been applied to Russia. Khruschev is reported in this book as saying, “ Stalin was a great fighter against Imperialism and a great Marxist.” Whether Gunther agrees with this—there is no hint. As this statement was made a year after Khruschev debunked Stalin it represents a fair sample of K.’s Marxism.
From Inside Russia one gathers that Gunther is not concerned about the question whether Socialism exists in Soviet Russia—that is as far as he personally is involved We in the Socialist Party can hardly be expected to accept that outlook. We are very concerned about it because the Russian system is not Socialism and we oppose it. In all our pamphlets and in every copy of this magazine we define what we mean by Socialism. Nobody need be under any illusion that the classless society envisaged by Marx and our party, has anything in common with Russia.
On page 315 we read, “Socialist realism is not so much a doctrine as a kind of platform, embracing much, and it is not altogether easy to define. In essence it means the service of the community.” The author makes no attempt to equate this with the Soviet Union.
Gunther quotes Lenin on page 385 when he declared that “Soviet Russia equals Socialism plus electrification,” which is about as sensible as stating that Socialism equals Soviet Russia plus electrification.
Towards the end of the book we encounter on page 405 “How Socialist is it? Not very if by ‘Socialism’ you mean equality of reward. The chief Socialist characteristics in the Soviet System are ownership by the State of all land and means of production. No accumulation of private wealth through the conventional business processes; no stock markets for private financial manipulation; national planning on the theory that the country belongs to the people.”
All this about State ownership and control of land and finance is the “man in the street’s” idea of Socialism, and would no doubt be shared by the Conservative, Liberal, Labour and Communist Parties. Among the non-Socialist factors he lists the banking system, people earning incomes with a great disparity, and the fact that people can accumulate any amount of money.
No mention has been made of the Russian rouble millionaires in this book, nor is it necessary to go to Russia to learn about them, but only to read Communist Party pamphlets before they get withdrawn for letting the cat out of the bag!
Finally, Gunther states that “This system has most certainly not produced a classless society,” which ought to clinch the matter. So long as classes remain there can be no Socialism—for the classless society is the foundation stone of Socialism which Russia yet has to lay.
The existence of an army, navy and air force, not to mention the armed police force and the special secret police, and a system of spying and intrigue equalled by no other State, finds no mention in this book, although Gunther mentions that there is nothing approaching democracy as we know it in the West, and only the most hazy ideas of how the West lives.
The recent developments in the direction of exporting capital (according to Lenin’s Imperialism, one of the hallmarks of Imperialism), finds no mention in this volume. The great internal National Debt is also not mentioned. However, the existence of classes means that there is a class struggle. The existence of a wage system means that exploitation is present. In addition, there is all the paraphenalia of Imperialism in Russia today based on Lenin’s Imperialism.
Horace Jarvis