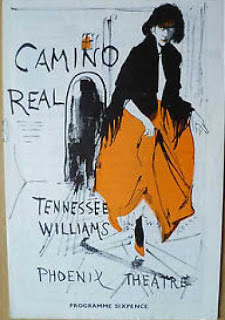 At the Phoenix Theatre, London, Tennessee Williams’ play, Camino Real (Royal Way), is one of imagination run riot, which is also a plea for imagination and humanity. This is not a story but a nightmare; an allegory of man’s inhumanity to man, which we can read back into the world we know. Here, on the Camino Real, “the well of humanity has run dry”; here is known only callousness and greed, and those who do not fit in get short shrift. People have no value as human beings and are worth more dead than alive. Poverty is a crime and law is for the property owner and the sharper. On the Camino Real the most dangerous word is “ hermano “—brother—which unites the masses and creates unrest. The daily ritual of the social myth—the restoration of the virginity of a gipsy girl by the moon—maintains the social equilibrium.
Tennessee Williams’ theme is that a world that rejects the humanity of man becomes the horror comic of the Camino Real, or, in the words of the play, “a comic, strip read backwards.”
If the theme is a grim one, it is set in a play nevertheless full of colour, richness and humour. In all, a fascinating circus of life well worth a visit if you’ve got a few shillings to spare and feel like a tough evening.
Ian Jones