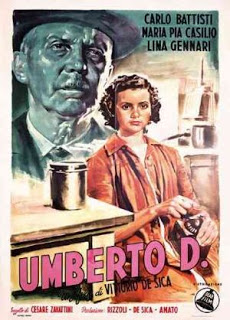 At the Curzon Cinema recently there was an excellent programme, both from the point of view of the film-lover and of the Socialist. The films are De Sica’s Umberto D and a Spanish family comedy called Meet Mr. Marshall.
Umberto D has been described by the filmic “blurbs” as “De Sica’s masterpiece,” and this seems to be one of the few occasions when they are right The film seems to be much nearer perfection than De Sica’s two most famous earlier films—Bicycle Thieves and Miracle in Milan. It is the story of an Italian old-age pensioner and his mongrel dog, and lays bare the misery and unbearable loneliness that workers suffer in their old age.
The film opens with a demonstration by old-age pensioners for an increase in their pensions. The demonstrators have no permit and, inevitably, they are dispersed by steel-helmeted police in jeeps. The film goes on to show in agonising detail the neglect of the old; the indifference of the majority of the young; the distrust even of other old people; and their attempt to cling to their last vestiges of human dignity.
The principal character in the film, a retired government employee, is in arrears with his rent His landlady, a brassy blonde singer, is anxious to throw him out in order to convert his pitiful single room into a parlour. Umberto (that is his name) who has lived in the room for years, is determined not to leave, and sells first his watch and then his books in a despairing effort to rake the money for the rent. In order to save money, he gets himself admitted into a hospital for a week. When he returns home he finds his room in a shambles, his landlady having taken advantage of his absence to start work on the flat. Despairing and tired of life, the only thing left to the old man is his dog, and it is his love for the dog alone that gives him the will to go on living.
The story is all on this simple and unheroic level but, needless to say, has far greater impact than any Hollywood “epic.” I will not spoil the film-goers pleasure by further description of the plot but will be content with some observations on the social implications of the film.
Perhaps the most pitiful and most crying problem that capitalism has thrown up is its treatment of its workers in old age. Condemned to inactivity and loneliness by the “Great God Profit” for which they have sweated away the greater part of their life, they are generously granted an old-age pension which has rightly been described as the final insult to the worker. There is no doubt that it is among the old, both of this country and of the other “civilised” countries, that the problem of poverty is at its most acute. They are condemned to exist on what is no more than a pittance, often in complete loneliness.
Owing to the nature of the Society in which we live, their children are often unable or unwilling to care for them, or even to help support them. The majority have the further indignity of having to apply to the National Assistance Board for money, who enquire closely into their means and capital and also whether they have any relatives capable of supporting them. This film does a very worth-while job in spotlighting this problem, and De Sica (whose Bicycle Thieves flowed that he was alive to the social problems of our day) is to be complimented for doing so and and for making a great film. 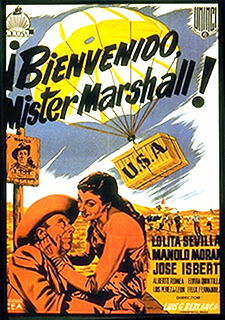 The other film in the programme provides the necessary light relief. It is an extremely amusing satire from Spain which turns on the fact that the world in general, and America in particular, looks upon Spain as being a land of gypsy dancers, bullfights, and peculiar hats. The little town portrayed in the film is in the province of Castile, and is as unlike the outsider’s concept of Spain as Devon or Cornwall.
The mayor, who is in co-operation with the rest of the population in “fiddling” their taxes, is informed that the American “Marshall Aid” officials will be visiting the town and showering their dollars wherever they go, and that a suitable welcome and demonstration must be prepared for them. The satire, not only aimed at America, but at almost everything and everybody, is carried out to great effect The sequences in which the principal personages of the town dream about America are particularly good. The town priest, for instance, dreams that he is cross-examined by typical Hollywood gangsters and subsequently, dragged before an inquisition of Ku Klux Klan members who sentence him to the gallows. This seems to be aimed, not only at the “K.K.K.” but also at the Catholic Church and the inquisition.
It is perhaps surprising that a satire of this kind should have come out of Spain, considering that unhappy country’s political institutions and economic circumstances, but one frequently finds that films and books of high quality spring from the most unexpected quartos. A good example is Los Olvidados, an excellent film about poverty and juvenile delinquency in Mexico City which showed living conditions at their most debased, and which was sponsored by the Mexican government.
We find sometimes that people who are not Socialists have facilities for vividly illustrating things that we say. I would look at Umberto D in that light. Perhaps I can reiterate that this programme is well worth a visit. Both Socialists and those who do not accept our point of view will come away feeling mentally stimulated.
Albert Ivimey