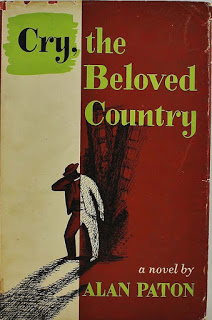 Unfortunately, or maybe, fortunately, we are not on the lists that book publishers use for sending out free copies for review. Being members of the working class we are unable to acquire all the books that are published, and very few books when they are first published. Further, being members of the working class, we have limited time for reading. Invariably we wait until we learn something about a book before we give it a scanning and refer to it in these columns. That means that some books are in their second or third, or even later, editions before we get round to them.
Such a book is “Cry, the Beloved Country,” by Alan Paton published by Jonathan Cape at 10s. 6d. This book was first published in 1948 but the recent film of the story has drawn a lot of attention to it.
It is a story of what may be termed the industrial revolution of South Africa. It deals with the final destruction of tribal life among the African negroes and the drawing away of the younger men and women from the rural areas to. the industrial centres where they become wage workers. It emphasises the difficulties that these people experience in adapting themselves to the conditions of a rapidly expanding capitalism and the crimes that follow from their abject poverty.
The story centres mainly in Johannesburg where theft, prostitution, drunkenness, rape, robbery with violence and murder are rife. The author tells us in his introductory note that his story is a compound of truth and fiction. He says that his account of the boycott of the buses, the erection of Shanty Town, the finding of gold at Odendaalsrust and the strike of the miners is such a fiction-truth compound; that in some respects it is not true, but “considered as a social record it is the plain and simple truth.”
The whole theme is worthy of a better approach. The events narrated are viewed through the eyes of a religious humanitarian and the story is plastered with religious quotes and sentiments. There are passages that reveal a clear understanding of the process that is taking place in South Africa, but the idea that permeates the book is that the solution to the negro workers’ problems is to be found in a kinder, more Christian and humanitarian approach, especially on the part of the white population. This is overdone and spoils the reading. This is a book worth reading if it should come your way, but it is not worth going out of your way to read it.

Another book first published in 1948 is “Men, Machines and History” by S. Lilley and published by the Cobbett Press, 10s. 6d. This is volume seven of a series entitled “Past and Present” which is being published under the guidance of an impressive editorial board of professors. We learn that it was the publisher’s original intention to complete the series with about forty books but they seem to have petered out after number eight. The eight books of this series that we have read are good. “Men, Machines and History” is exceedingly good.
Fundamental to an understanding of the socialist case is the knowledge that it is the continuous improvement in the tools that man uses that is fundamentally responsible for the changes in the structure of the society of which he is a member. Human society has travelled a long way since the days of the flint sickle and stone hammer—to the days of jet-propelled transport, radar and the release of atomic energy. At certain points in that journey we can observe how a particular discovery or a group of inventions have had an outstanding effect upon the prevailing method of production. We can, for instance, see how the invention of gunpowder hastened the end of the rule of the feudal baron protected by his armour and his castellated walls. We can see how the discovery of steam power released a flood of subsidiary inventions and gave impetus to the industrial revolution in this country, and the social changes that followed it.
Those are the glaring examples. This book, “Men, Machines and History,” takes us from the time of Palaeolithic man with his primitive tools of stone, bone and ivory through the 7,000 and more years to the end of the last war and the release of atomic energy. It refers to many hundreds of inventions between those times and gives us a little of the mechanics, a little of the technology and a little of the social effects surrounding many of them.
The author says that he has made his references to social conditions very brief because other books in the series will provide the social background at greater length. All the same, his references are extremely pertinent.
He tells us of the discovery of copper and the inventions that followed from it and how, by 3000 B.C. it had produced a decisive change in the social structure.

“The simple communities of more or less equal farmers had been replaced by states in which the vast majority of the inhabitants lived at subsistence level, often as slaves or serfs, while all the surplus product of their labours was used to provide a luxurious existence for a small class of kings, nobles and priests, as well as supporting the civil services and armies which formed the mechanism for extracting from the masses the products of their work. Class-divisions had become the basis of social structure.” (Page 11.)

Mr. Lilley then goes on to tell us that a given social structure, having been thrown up by a level of technical development, can then become a retarding influence on further technical advance. He instances the great slave empires that arose in Greece and Rome following the division of society into classes. The stagnation of technique that prevailed at that time was not due to lack of problems to be solved but to the make-up of society into, broadly speaking, two classes; the down-trodden peasants, slaves and serfs who did all the productive work and received only the bare necessities of life in return, and the small ruling class of priests, nobles and kings who did no productive work but lived in privilege and luxury on the fruit of the work of others.
The working class had knowledge and experience of the tools and techniques that were then in existence. They could quite simply have invented improvements, except that they had no incentive to invent since any increase in production would be taken away from them to add to the wealth of their masters. Further, as they worked to the utmost, they had no leisure time to devote to invention.
The ruling class, on the other hand, had no contact with the process of production, was ignorant of the technical deficiencies and had no practical knowledge and experience to effect improvements.
Yet, in this period of stagnation progress did not altogether cease; we learn of the invention of the spoked wheel, improvements in military equipment and the diffusion of the use of bronze over large parts of Europe.
So we can proceed through the middle ages, the industrial revolution and two world wars marvelling at the ingenuity of man. The book is splendidly and copiously illustrated and carries graphs and charts showing relative invention rates and other interesting data. Right at the end of his book the author betrays a sneaking regard for Soviet Russia and boosts the rate of progress in that country. We can overlook that against the excellence of his work.
In “Retrospect and Summary” at the end of the book the author arrives at two complementary conclusions:

We could not agree more. Hasten the day when the capitalist social structure gives way to the socialist one.
W. Waters