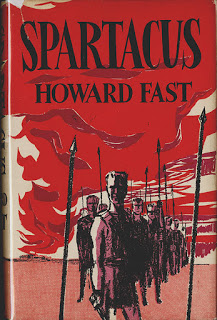 Spartacus was the leader of the third, and greatest, slave revolt against Rome (about 73 B.C.). A Thracian by birth and a gladiator, he rallied an army of slaves and, over a period of years, by adroit generalship, he defeated army after army of Roman soldiers sent against him, until the revolt was finally suppressed with great cruelty.
It was almost inevitable that a writer like Mr. Howard Fast, who selects the subjects for his novels from the struggles of exploited peoples against their oppressors, should eventually write a book about this revolt. His latest book, “Spartacus,” published by The Bodley Head (13/6) may not be such a gripping story as some of his earlier writings, but it is splendid reading and is to be recommended.
This story is not a chronological history of the slave rebellion. It is more in the nature of a symposium, the story being told through the mouths of a variety of characters each of whom views the revolt from a different angle. Licinius Crassus, the Roman general who led the army that eventually defeated the slaves; Lentulus Gracchus, a shrewd, successful Roman politician; Lentulus Batiatus, who kept the school for gladiators at Capua from which Spartacus escaped; Marcus Tullius Cicero, who later became the famous Roman philosopher, writer, politician, orator and consul; David, a fictitious Jewish rebel slave who in the book was closely associated with Spartacus from beginning to end of the revolt; these are some of the characters who tell the story and discuss the problems of chattel slave society.
A number of these problems have their parallel in present day capitalism, as, no doubt, Mr. Fast intends us to realise. Instance, unless the slaves could destroy the chattel slave system there was nowhere for them to go and nothing for them to do but to struggle until they were either killed or driven back into slavery. So it is with wage workers. Unless they abolish capitalism, struggle how they may, they will remain an exploited class.
The author gives a clear analysis of the Roman republic. It was a world in which the majority had nothing whilst a few had almost everything. Those who owned so much, needed protection from the slaves who produced it for them. The Roman soldiers, in the main, were peasants who had been driven from their land in order that slave plantations could be developed. The slave plantation had turned them into landless paupers. They had no more to defend than the rebel slaves whom they were sent to fight against. Those who owned nothing, who possessed no slaves, had to march their feet off, live in filth and squalor, wallow in blood and die fighting the slaves, in order that the slave owners could live in comfort and luxury. Had the Roman soldier but realised it, he had more to gain from a slave victory than from a slave defeat.
The job of the Roman politician was to be an illusionist, to convince the landless Romans that they had power, that they were the strength and glory of Rome, that they were free and that their freedom was precious, that they controlled their civilisation by their vote, to make them feel proud and superior because they were not slaves. Then, no matter how they stank, how hungry they were or where they slept, they felt proud and ready to defend the society that kept them in that condition against those who were their companions in misery—the slaves.
The horrors of crucifixion and gladiatorial combat, the depraved morality of the Roman leisure class, the comradeship within the many-tongued slave army and the hopes and fears of the slave leaders are splendidly dealt with in this book. It is well worth reading.
In an introductory note the author tells that, with the help of friends, he had to publish this book himself in America. Owing to the political temper of the times no commercial publisher would undertake the publication and distribution of such a book in the U.S.A.
Penguin Books are publishing a new series on the development of English society. It is to comprise eight “Pelican” books with the following titles:

All except the first of this series have been published. Each book is by a separate author and each author is a specialist in the period about which he, or she, writes.
The authors have had a free hand with their work, with the consequence that each has put his own emphasis on different aspects of social development, but, in general, the series is good. 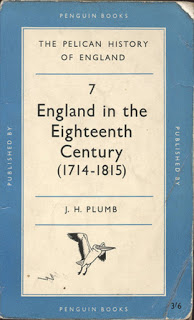 Certain chapters in these books are complete essays in themselves and very useful essays, too. Instance the chapter “John Wesley and the Road to Salvation,” in “England in the Eighteenth Century,” by J. H. Plumb.
The influence of Wesley’s early life and his parents is dealt with. When, after 1738, he started to preach his Methodism and to build the organisation of Methodist chapels he was helped by the fact that the newly developed industry in this country was creating a number of new towns which had no churches. The tie-up between the Anglican church organisation and the state was such that the Anglican church ignored the new towns and so Wesley had a clear field. He had a violent dislike for radicalism and preached that the people should have no share in government. For him, the way to reform the evils of society was to transform the will of the individual. He preached thrift, abstinence, hard work and concentration. It was the Puritanism of the previous century shorn of its political radicalism. To an embryo capitalist class, striving by thrift and frugality to accumulate greater capital this teaching had a great appeal.
Wesley was intensely superstitious. He believed in witches and the possession by devils. His teaching called for no exercise of the intellect and appealed to his uneducated working class audiences. The owners of the workshops and factories that were growing up all over England, following the inventions of Savery and Newcomen, Arkwright and Hargreaves, the Darby’s of Coalbrookdale and others, were demanding more and more child labour. Poverty stricken workers had need of the few pence that their children could earn. Wesley taught that play was unworthy of a Christian child, that a child’s sole education need be only a knowledge of the Bible and the Catechism, that for the sake of its everlasting life a child should be at work. So, a Methodist could regard his overworked children with complacency. Methodism flourished through discipline and toil in the ugliness of suburbs and the industrial villages of England.
But the Methodist teaching destroyed its own objective. Wesley himself wrote, at the age of 84. that, through diligence and frugality many of his disciples were increasing their wealth and, as their wealth increased so did their pride, their anger and their desires of the flesh. Although the form of Methodism remained, the spirit was vanishing.
This Pelican History of England is, in total, very useful. There is another Pelican book entitled “Pre-historic Britain” which, although not one of this series, is a useful addition to it as a prelude to the series proper.
W. Waters