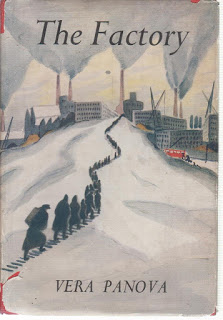 Novelists and story writers create fictional characters, but, unless these characters are to appear ludicrous, they must be portrayed against a background of the social conditions of the period and part of the world that is the scene of the story. The characters must eat, dress, play and behave in the manner of their time, their country and their class. They must live in buildings and travel by the transport facilities available in their day and to those of their social status. Thus, the writer of fiction can present us with a picture of living conditions in different parts of the world at varying periods of history. The more correctly he describes the living conditions, the more real will his characters appear and the better will be his work. He that sets the story in the conditions in which he himself lives has a simplified task.
Vera Fiodorovna Panova is a Russian authoress who writes of her own times. She has received official Russian awards and prizes and for her first novel she received the Stalin Prize of 10,000 roubles. In 1948 there was published in Russia her second novel entitled “Kruzhilika.” This has now been translated into English and is published by Putnam & Co. under the title “The Factory.” The blurb on the jacket of the book says, “Obviously it has to be reckoned with in any portrayal of Soviet life.”
The story has no plot to be cunningly unfolded. It is simply a series of interlinking scenes of everyday life in Russia, centred around a factory. Naturally, in such a setting, the majority of the characters are workers and it is mighty interesting to learn how they live.
In the early pages of the book we are treated to a view of a meeting of the “town party executive,” where most of the time is taken by a trade union official who complains that the factory directors do not allow the Trade Union to play a sufficiently important part in the affairs of the factory. The main function of the Trade Union appears to be to assist in improving production, suggesting technical improvements, and complaining because ”. . .  the director does not pay enough attention to the voice of the masses.”
The factory director lives a vastly different life from that lived by the factory workers. The following extract from pages 257-258 illustrates. The director, Listopad, is driving around the town in his car because he wants to think about his new girl friend. The car is driven by Mirzoev (Akhmet), his chauffeur.

Listopad then goes on to soliloquise about the housing shortage and ” . . . these hideous brick cubes with two hundred flats in each and five stories without a lift.” Then his thoughts come back to his girl friend and the prospects of having her in the car with him. He speaks to his driver;

“Akhmet.”
Mirzoev turned to the director.
“ Tell Averkiev to get me another car rug. A good one—wolfskin.”

All the characters in this book are interesting. There is the demobbed soldier who returns home, gets married. spends his gratuity and then has to sell some of his old clothes in the market to raise enough money to get a meal. In the market we meet the usual marketplace patter, sales talk and trickery.
We read the troubles of the Trade Union collector who has the week’s subscriptions stolen from his pocket in a tram. He borrows from friends and relatives to make up the money, and.

” . . . from then on, three-quarters of hit earnings went to pay off what he owed. The remaining quarter was not sufficient even for the barest necessities and be got heavier and heavier behind.”

We are given a picture of the workers spending their Sundays digging their small allotments in order to grow potatoes to help eke out their wages. They make the day a family outing, taking sandwiches for dinner. We also read of the young factory worker who was awarded a bonus of 19,000 roubles for special work one month. With that money he left the job, to the great annoyance of the factory chiefs who regretted the loss of so useful a worker, so good a pace setter. This incident suggests to us that the Russian State chiefs found it more beneficial to give medals and diplomas for exceptional work.
Whilst reading this book one is struck by the idea that, except for the climate, the vodka and the queer sounding names, this is a story of workers in any part of the world. Despite the claims of the Communist Party and their supporters, it appears that the lot of the Russian worker during the years 1945 to 1948 differed but little from that of workers in other countries. They were poor, overworked and ill-housed, just as the victims of capitalism the world over. Like good patriots they sacrificed for the war effort and they hated German workers like hell. The voice of Joe Stalin over the radio is received like the voice of the Pope by a devout Catholic. The State is their religion. They work till they drop for their church and their Pope—and their wages.
W. Waters