Mr. Emanuel Shinwell is Labour M.P. for Seaham and Minister for Fuel and Power in the present Government. He won the seat from the late J. R. MacDonald in 1935 and was re-elected at the recent general election. MacDonald had failed to keep his pledges to the workers. As leader of the Labour Party and head of two Labour Governments (1924, and 1929-31), he had failed to bring the workers the promised improvements in their condition and had not protected them against the slump of 1931 or even against the employers’ onslaughts on their standard of living. MacDonald went over to the Tories and Shinwell turned him out of Seaham in consequence. Now we have a Labour Government with a big majority and Mr. Shinwell backs it and its claims. We know from Mr. Shinwell what the workers have a right to expect from the Labour Government because a year ago he wrote a book in which he let it all out. (“When the Men Come Home,” by E. Shinwell, M.P., 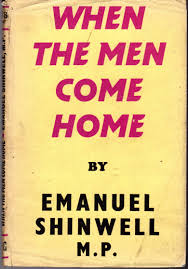 published by Gollancz). We cannot reproduce all the things Mr. Shinwell claimed should and could be done, but we can place on record just a few of the outstanding items.

Mr. Shinwell drew up a list of 10 Questions which he urged the workers to put to Tory Candidates in the General Election which he rightly anticipated would not be long deferred. Some of the questions were of the characteristic woolly kind beloved of Labour M.P.s, so framed that they mean anything or nothing, questions that any Tory would have agreed with knowing that they committed him to nothing in particular. Others, however, were definite and unambiguous and of these we select one or two. What could be more appropriate than that Mr. Shinwell’s own questions should be addressed to Mr. Shinwell? We want to know if Mr. Shinwell and his party are prepared to carry out what he demanded Tories should be prepared to carry out. Here they are:—

“Are you willing to support the principle that any physically and mentally fit individual who fails to make a useful contribution to the work of the community shall not be fed, clothed and housed at the expense of those who do work?” (p. 41-42).

This plainly commits Mr. Shinwell to the abolition of all property incomes. (He makes provision elsewhere in his book for infirm and aged to be adequately supported).

“Do you approve the payment of a minimum wage to those in employment, and an equal subsistence standard for those for whom work cannot be found, or who will never be able to work by reason of old age, industrial accidents or war wounds?” (p. 42).

Mr. Shinwell made no attempt to hedge on this principle. He explained (page 9) that by minimum wage he meant “a minimum wage a long way above mere subsistence level.” He rejected the Beveridge proposals as “meagre” and as needing revision, and emphasised that his “first great principle” is that every worker “whether employed or not” shall have the right “to minimum wages or allowances that will raise him above the line of annihilating poverty.” (p. 10).

The third of the questions that we shall place on record relates to housing.

“Are you prepared to support legislation to clean up at once the hideous, sprawling slums of our great cities, and to provide utilitarian, artistic and scientifically-equipped houses accessible to all the families in this country who may require them? ” (p. 42).

After enumerating his 10 questions, Mr. Shinwell went on to tell his readers that the answers given by the Tories would convince them “that there is no hope for you so long as the present political set-up in this country continues.” Now we know where Mr. Shinwell would have us believe he stands, and after Mr. Shinwell’s party have been in power for some years we will put Mr. Shinwell’s questions to Mr. Shinwell and ask for plain unequivocal answers. We wonder if Mr. Shinwell will then, like MacDonald, before him, be engaged in explaining why it was not possible to carry out pledges. Perhaps by then a much larger number of workers will have realised that Labourism (the administration of capitalism by a Labour Government) is dead sea fruit, and one of our Socialist Candidates may be knocking at the door in Seaham.