“Well, why not?” With that question in their ears and with the appealing 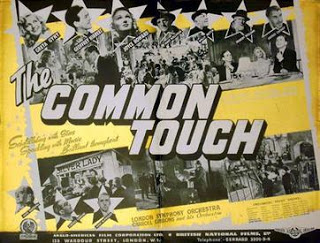 close-up of the old man in their minds, the audience saw the end of the film, “The Common Touch.”
I had read only a few hours previously that this film was rather more intelligent than usual, but I doubt if the critic who made that remark saw it in the way that I did. It was a propaganda type of show and was certainly more intelligent than usual in its artful and subtle appeal to the mass of people to believe that all will be well with the world if things are left in the hands of the wiser and more decent type of master.
The film finished where the crooked director of a firm of builders had been caught trying to put a fast one over the owner of a doss-house. The brave, clean, young hero, son and heir to the late head of the firm and now its chief, promised, in a letter to the habitués of the doss-house, to find alternative accommodation for them while the old building was to be demolished. The new building, when erected, would contain some of the things that they now needed, but the atmosphere would remain the same. Titch, the odd-job man of the place, turned to the old man and asked, ” Do they mean it?” The old man replied, ”They mean it this time,” which caused Titch to exclaim that it would be heaven on earth, and the old man closed with, “Well, why not?” and I felt that the audience thought likewise, that it was meant this time, as also were the promises of better world this time after the present trouble is finished.
In so far as the film implied that the distress of these wretches was aggravated by the crookedness and selfishness on the part of some of the rich, and that it could be lessened by intelligent, understanding action by the “decent” ones of the upper class, the film was largely true. But we could not expect the film to show that the poverty and hardship was caused by the same system of society that made the rich possible, and that all the understanding and intelligence and goodness on the part of these rich could not abolish this wretchedness. Nor could we expect the film to show directly that in such a society as we now have there will always be plenty of causes and room for such crookedness, and that as fast as one evil had been dealt with more would arise.
Moreover, in practice there is nothing to determine that the enlightened rich could have their own way even if they did desire to make the workers’ lot any easier; it is just as likely that all their work would be lost in trying to get their ideas adopted by the other members of their class, and while such a hypothetical position lasted the workers’ troubles would continue, and supposing that the “decent ” ones were defeated, what then?
As all Socialists know, the only people who can alter the society in such a way as to remove the causes of poverty, not merely to lessen it, but to remove it once and for all, and with this the cause of war in the world, are the workers. They will do this as quickly as they understand the basis of the system of the society in which they live. It is therefore incumbent upon Socialists to spread this understanding, and anything short of this is a waste of time, which soon leads to a waste of lives, by malnutrition (a euphemism for slow starvation), and sooner or later, by war.
S. C. Greenwood