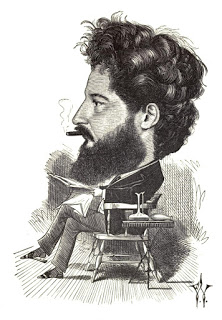 “We Socialists are often reproached with giving no details of the state of things which would follow on the destruction of that system of waste and war which is sometimes dignified by the lying title of the harmonious combination of capital and labour. . . .  To this Socialists answer, and rightly, that we have not set ourselves to build up a system to please our tastes, nor are we seeking to impose it on the world in a mechanical manner, but rather that we are assisting in bringing about a development of history which would take place without our help, but which, nevertheless, compels us to help it; and that, under these circumstances, it would be futile to map out the details of life in a condition of things so different from that in which we have been born and bred. Those details will be taken care of by the men who will be so lucky as to be born into a society relieved of the oppression which crushes us, and who surely will be, not less, but more prudent and reasonable than we are. Nevertheless, it seems clear that the economical changes which are in progress must be accompanied by corresponding developments of men’s aspirations; and the knowledge of their progress cannot fail to rouse our imaginations into picturing for ourselves that life at once happy and manly which we know social revolution will put within the reach of all men.
” . . . Serious occupation, amusing relaxation, and more rest for the leisure of the 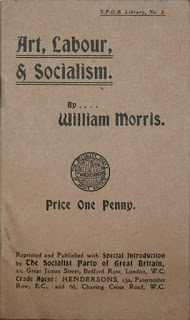 workers, and withal, that beauty of surroundings, and the power of producing beauty which are sure to be claimed by those who have leisure, education, and serious occupation. No one can say that such things are not desirable for the workers; but we Socialists are striving to make them seem not only desirable but necessary, well knowing that under the present system of society they are impossible of attainment—and why? Because we cannot afford the time, trouble and thought necessary to obtain them. Again, why cannot we? Because we are at war, class against class and man against man; all our time is taken up with that. . . . Under such conditions of life labour can but be a terrible burden, degrading to the workers, more degrading to those who live upon their work. This is the system which we seek to overthrow and supplant by one in which labour will no longer be a burden.”
(From “A Factory as it Might Be.”—1884.)
#    #    #    #
“Well, I will now let my claims for decent life stand as I have made them. To sum them up in brief, they are: first, a healthy body; second, an active mind in sympathy with the past, the present and the future; thirdly, occupation fit for a healthy body and an active mind; and fourthly, a beautiful world to live in. . . . It is not we who can build up the new social order; the past ages have, done the most of that work for us; but we can clear our eyes to the signs of the times, and we shall then see that the attainment of a good condition of life is being made possible for us, and that it is now our business to stretch out our hands to take it. And how? Chiefly, I think, by educating people to a sense of their real capacities as men, so that they may be able to use to their own good the political power which is rapidly being thrust upon them; . . .  to get people to see that individual profit-makers are not a necessity for labour, but an obstruction to it. . . .  I admit that the work is long and burdensome; . . . people have been made so timorous of change by the terror of starvation that even the unluckiest of them are stolid and hard to move. Hard as the work is, however, its reward is not doubtful. . . . That claim for equality of condition will be made constantly and with growing loudness till it must be listened to, and then at last it will be only a step over the border and the civilised world will be socialised; and, looking back on what has been, we shall be astonished to think of how long we submitted to live as we live now.”
(From “ How We Live and How We Might Live.”—1888.)