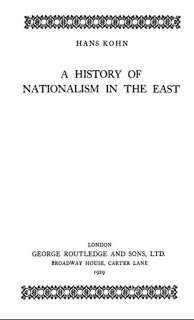 “East is East, and West is West And never the twain shall meet.”

So sang the jingo bard, Kipling; but, like most poets, he was prone to inaccurate statements. Dr. Kohn’s book shows that the view quoted is as absurd historically as it is geographically. Just as surely as any line of latitude forms a circle, so it is also true that “eastern” and “western” races have acted and reacted upon one another.

In the past the Arabs and the Jews have, in different ways, influenced European development profoundly under suitable economic conditions. Since the eighteenth century dawned this development has in turn spread with rapidly accumulating force over the entire globe—“the Orient ” included.

Dr. Kohn’s theme is the effect of this development upon the literary, ethical, religious, and above all, political aspects of oriental existence. Not that he puts the matter quite like that. Here and there he gives unmistakable evidence of an acquaintance with the materialistic view of history, but he is far from logically applying it. On the contrary, there are times when it is a little difficult to tell whether one is reading a transcription of the mystical views of the people, whom the author describes or the author’s own views on the subject. This is most noticeable in the two final chapters on “India’s Awakening” and “ Indian Nationalism.”

Dr. Kohn is nothing if not comprehensive. Russia, Northern Africa, Turkey, Arabia, Persia, Afghanistan, India and China are all more or less thoroughly reviewed. One wishes the author had probed as deeply as he has travelled widely, at least in the literary sense. His clearest sentences are contained in his introduction on page 10. Having briefly sketched the downfall of feudalism and the rise of capitalism in Western Europe with the accompanying religious and political changes he goes on to say :—

“A similar process is repeating itself in the East. Ancient economic systems are falling into decay, modern industrialism, wholesale trade and finance capital are beginning to penetrate everywhere. The old ruling caste of landed nobility, warriors and priests is being slowly ousted by a rising class of merchants, lawyers and men of letters. Professional men — especially lawyers and students—are protagonists of the new nationalist movement, their champions and leaders.”

Unfortunately, the author does not maintain the argument on this level. He advances the theory that there are three “fellowships of common destiny,” viz., the Anglo-Saxon (including the U.S.A.), the European (excluding Russia), and the Oriental. Says the Doctor (page 3):—

“The Anglo-Saxon fellowship feels and wills its unity more consciously and fervently than the others. This sentiment of unity led England to come to an agreement with the United States in 1923 regarding the payment of her war debts, thus voluntarily burdening her citizens with an unprecedented weight of taxation.”

This superficial idealism spoils the book in several places. For example, in dealing with Russia, the author remarks: “England was the birthplace of middle-class revolution. Russia has been the first to achieve social revolution ” (page 125). What does he mean? Was not the middle-class revolution a social one? Is the Russian revolution anything but a middle-class one, in spite of the activity of the workers therein? Indeed, Dr. Kohn seems far too ready to accept Bolshevik claims at their face-value, and is prepared to make excuses of this character.

‘‘Though Russian policy in Asia after 1917 was often determined by national egotism and conducted from the point of view of Russia’s well-being and expansion, yet this was done in the name of an international ideal which augmented its force and, at the same time, gave it a sanction comparable only with England’s middle-class European ideal of gradual training in the blessings of freedom and self-government ” (pp. 130-1).

“A rose by any other name would smell as sweet,” and we do not like Russian capitalist nationalism and imperialism any the better because it is labelled “Communism.” Dr. Kohn is on firmer ground when he points out that ‘‘there were similarities between Russia’s social structure and that of the Easts . . .  Like Russia, the East was predominantly agricultural. As in Russia, the most urgent task was to solve the problem of the peasants and the land (page 143).

There you have the matter in a nutshell. Neither Russia nor the Orient provide the conditions necessary for the establishment of Socialism (i.e., social ownership of the means of production), and Communists who argue that ideas can be transplanted regardless of that fact are trying to stand the historical process upon its head. Unfortunately, once more Dr. Kohn fails to look at the matter in the light of his own observations, and appears to look at the peasant millions of Russia and the East for considerable assistance in the elucidation of Europe’s problems; “Europe’s,” that is, in the same sense that they have originated there and do not change their essential character when they spread eastward.

We look in vain for evidence in support of this view. It is true that (as in Europe in the sixteenth century) religion in the East is losing authority and its place is being taken by nationalist politics; but Dr. Kohn provides ample evidence in the course of his book that this movement touches but the fringe of the population. Everywhere it is the “intellectual minority,” an insignificant fraction, that is struggling for power; the passive fatalistic peasant mass may here and there be stirred into activity in support of this minority. Temporarily, the peasants may score victories and some increase their holdings; whereupon they become as reactionary as any feudalist.

In the long run, however, capitalism expropriates the peasants as ruthlessly as it does the handicraftsmen before them. The tax-collector and the money-lender denude him more or less rapidly of his property and thus convert him into raw material for the labour market.

For this expropriated class of producers neither nationalism nor Dr. Kohn’s “fellowship of common destiny ” (much less his “world-consciousness”) has anything intelligible to offer. They are but pawns in the game of life so long as that game is played by rival sections of the master class. Their historic mission is the “expropriation of the expropriators,” and on this point Dr. Kohn is most disappointingly foggy.