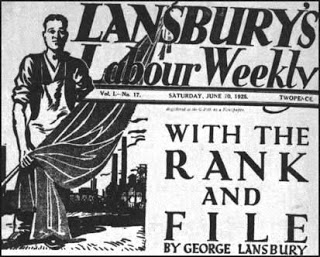 The object of this publication is “to present news in such fashion as will make ‘Socialists of our readers.” Those who know Lansbury’s career of manoeuvre for place and position by the use of emotional muckraking, will not expect anything of a Socialist nature from that quarter. A perusal of this literary mixture will confirm expectations. Page 1 (20.6.25) is devoted to “Problems of Real Life,” with solutions by one “Martha.” It is difficult to describe its piffle :—‘‘Here is a woman in love with her daughter’s husband. What should I do?” she says. “Martha” advises some “real hard work” and the “atmosphere of a dozen howling babies.” Mrs. A., who has “labour principles,” six children and a policeman husband who is a “rank conservative,” possibly as rank as the “labour principles.” “Martha” settles this problem with the true Lansbury flavour. “Mrs. A.,” she says, is a “heroine,” she ought to “live spiritually ” and “resist not evil.”

Much of the other rubbish, even its Labour items are the merest surface skimming, inferior to the ordinary Labour Magazine. The unemployed are advised to march out with banners to agitate “until work, honest, decent work, is found for those capable of working” : not “all” capable, of course, only the workers. The Capitalists are asked to give them the whip hand by the removal of unemployment and thus abandon their privileged position in society.

But Lansbury knows better, he merely plays upon the Workers’ weakness, their insane love of work. In columns of egotistical slobber he gives his experiences among parsons and high-brow labour women. He “felt a thrill of real joy that it has been my good fortune to be a soldier in our Socialist Army.” What lying impudence from one whose party and himself have done more to besmirch and hinder the cause of Socialism than the Anti-Socialist Union. Of the crowds he addresses Lansbury writes: “I don’t suppose any of these . . . could pass an examination in Marxian economics; they are ignorant of these and the ‘Materialist Conception of History,’ as are most of those who write and talk so glibly about these so-called eternal verities.” We have supplied the evidence from time to time that without this ignorance Lansbury and his tribe could not command a following. Neither will Lansbury receive the patronage of his “rich friends ” nor the Labour Party receive Capitalist financial support unless they endeavour to perpetuate such ignorance. In this journal are other items all equally puerile. “As God sees it,” childish cartoons, quack adverts, and a rebel song. People who claim that this material will make Socialists are either liars or fools. Nevertheless it is what we expect from one who for years has flourished upon Working Class credulity with a mixture of sentimental slosh and political trickery.