‘When Labour Rules.’ A review of Mr. Thomas’s book

Apart from other considerations, Mr. Thomas’s book is badly written, the 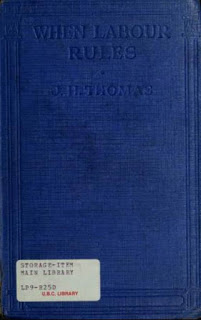 sentences are often involved and their meaning obscure.

In many instances it appears that the object is merely to spin words, as example : “Nevertheless, there is still a very large number of people who have not yet gained the ability to understand what they see” (p. 8), which is meant to convey that many people do not understand what they see— a shorter and clearer way of putting it.

On page 7 of the foreword, referring to the traditional British insularity, the author says : “They [the majority of the people in this country] failed entirely to realise the existence of forces they had not actually experienced,” and a little lower down on the same page he states: “It is true that they knew there were ever-growing forces in the land, but they did not recognise them as forces.” It would hardly seem to be necessary to suggest that what is known must be recognised.

We get (p. 8) a statement which might have been put in a more discreet form when the writer says: “There are some who make it their business to use every means within their power to distort the vision of the remainder,” because Mr. Thomas’s book is nothing more or less than such an effort, if a clumsy one, from the first page to the last. The concluding sentence of the foreword gives the whole game away, so I will quote it in full.

“But, however true or false future events may prove my vision to be, I do assert, with all the vehemence at my command, that labour rule will be entirely beneficent, and that its dealings with high and low, rich and poor, will be marked with broad-minded toleration and equity.”

So there it is. When we have that sort of labour rule which Mr. Thomas stands for we shall have, as heretofore, “high and low, rich and poor,” with the misery and degradation inseparable from such class distinctions.

There are commendatory references to profit sharing and bonus schemes and the use they have in making “both men and girls more efficient and valuable workers” (p. 15). We are, moreover, instructed (same page) that “industry would tremendously benefit by the workers having a share in the management.” How a benefit to industry in the capitalist sense— meaning, of course, an increase in the ratio of surplus value extracted from the worker—can be of other than negative interest to the worker is a point that is not explained. Mr. Thomas leaves that, as he does all other debatable points, and merely makes a statement, trusting that the ignorance of his readers will do the rest.

On page 24, dealing with the “Right to Work” and the “Right to Rest,” we read “That Capital will be entitled to some return will be recognised,” and lower down: “Some of the richest men are the hardest workers and are rich largely because of that” (our author is a worthy disciple of Ananias); and yet lower down : ”These people”—(the rich) —” will have to work and a proper limitation of their unearned wealth will provide the necessary incentive. What form their work will take will be a matter entirely for themselves.” What a picture ! To-day these folk expend their energies disposing of the wealth they filch from the workers, chasing each others’ wives and daughters, gambling at Monte Carlo and other places, and in all varieties of dissipation, including the use of the daughters of the working class as prostitutes, yet Mr. Thomas postulates that their work will be a matter entirely for themselves. So they have only to label their existing occupations “work” and he will be satisfied “when Labour rules.”

There is some wonderful work incorporated in Chapter VI entitled: “The Labour Government and the Constitution,” and one or two quotations will be useful. “There can be no question among thoughtful people that the Monarchy plays a large part in holding the British Empire together . . and it would require a very unwise monarch to change this faith in the hearts of the people.” And then we get a little dissertation on the Constitutionalism of the King, which concludes: “While such an attitude is adopted by the King the question of Republic versus Monarchy will not arise.”

Our author then proceeds to a panegyric on the Prince of Wales which for sickening sycophancy and servility could not be beaten anywhere, and on page 47 he says, “A King of England to-day holds a skilled and responsible position.” He completes this paragraph by giving the show away, thus: “Furthermore, the King is surrounded by skillful and well-qualified advisers,” These advisers are, of course, the people who pull the strings and work the marionettes.

The rest of the book is merely bad economics and cringing obsequiousness, so we can conclude our survey by quoting the last paragraph.

They will see that all we claim is a first charge on industry to the point of a reasonable share in the decencies and comforts—not luxuries, note—of life. And I am optimistic enough to hope that when they see our objects are fair play all round, and when they have it proved to them that our administration will mean industrial peace with all the stupendous saving that means, they will be ready, not only to give us the credit for having the good of the community at heart, but will come forward and associate themselves with our ideals, both in home and international affairs.

That paragraph is the book. Let Labour— Thomas, Macdonald, Snowden, Smillie, Thorne, and all the gang—rule, and the capitalist class will have a world without labour troubles and strife and with all the “stupendous saving” that will result. And the capitalist lion will come forward and associate himself and lie down with the working-class lamb— inside it!

If the Labour faker and the Labour movement can be more effectively exposed than by a perusal of this work written by one of the leading lights of the clan, the present writer would suggest that such exposure would be difficult to discover, and the only excuse for dealing at such length with it is that, viewed from such an angle, it has value as showing the crawling humbug and blatantly canting hypocrisy of certain servile flatterers of the capitalist class, who, posing as the champions of the working class, expend their utmost effort in helping our masters to keep us in subjection.