“A Primer of Socialism,” by Thomas Kirkup Third Edition. Revised and 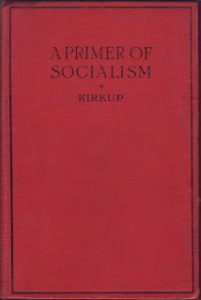