Any reader who has followed the fortunes of the Socialist Party in this country through the 16 or so years of its existence will not need to be told that it is not our custom to make appeals for funds through the columns of the Socialist Standard. At our propaganda meetings in the highways and byeways, at street corners and in open spaces, we have, of course, commonly afforded those in sympathy with our aims, but who, for various reasons, find it expedient to remain outside our Party, opportunity to do their bit for the cause through the medium of our ordinary collection ; but, rightly or wrongly, it was only under direst stress that we determined to depart from our custom and ask those to whom the “S.S.” mattered and the activities of the Socialist Party were of consequence, to signify the same by coming to our assistance in a time of crisis.

We do not desire to express any opinion as to whether or not the response has been satisfactory. We trust we are not so void of imagination as to see nothing beyond the “face value” of the little contributions that have reached us. Every coin, we believe, that has gone to make up the £300 we have acknowledged, represents an earnest and fervid longing for the triumph of Socialism, and most of them, the smallest not less than the largest, a real sacrifice for Socialist principles.

So far so good. But what we desire to point out now is that the need for cash ia still as urgent as ever. Those to whom it means anything will be glad to see that the present issue of this journal consists of 16 pages instead of 8. This event is not altogether unconnected with our £1,000 Fund; neither is its continuance altogether independent of that fund. For, notwithstanding that larger supplies of paper are now available, the time is not yet when we can supply a 16 pp. “S.S.” for a penny without incurring financial loss. In other ways also the cause calls aloud for money. Those who are able and willing to work for Socialism find their efforts stultified by lack of means. At a time when almost every worker, sick at heart of the awful plight to which capitalism has reduced the world, is asking “What is Socialism ?” and when so many, interested in obscuring the truth, are giving lying, misleading, and travestying answers to that question, we who alone in this country are qualified to explain what Socialism is, are unable to spread the enlightenment abroad as we desire because we are poor and propaganda, in any phase, costs money.

We wish, therefore, to correct the idea that the need for giving money to the Socialist movement is a mere temporary matter, or that when a “Longer for Socialism” has given one contribution he or she has done all that is needed or has paid his or her share of the PRICE of Socialism. The need for money contributions is as permanent as capitalism— just exactly. Money is the very foundation of efficient personal effort. A soldier may pull a trigger for nothing, but the cost of the cartridges must come out of somebody’s pocket. In like manner, a soldier in the Socialist army may be doing good work for the cause every day of his life, but in order to make his labour truly efficient his tongue must be well backed up with suitable literature, and with a sound and virile organisation, and with a progressive battle on the political field. The personal effort, in this sense, must necessarily wait on the Party’s income. Therefore we can never have enough money until the struggle ends, and an increment to our funds, inasmuch as it enables our members to do more and better work, is just as surely an increase in our strength as is an increment in our numbers.

We would urge, therefore, that what is most vitally needed is that those who think with us (and this applies with increased force to those who for the present can find little other opportunity to join in the battle) should make up their minds to give a contribution at regular periods. If we can establish our fund upon some such basis as that we shall soon be able to do great things for Socialism.

And now will friends kindly note that we far prefer to devote our space to other subjects than this, and that the absence of lengthy appeals by no means indicates that the need for finance is over.

We acknowledge tribute as under. 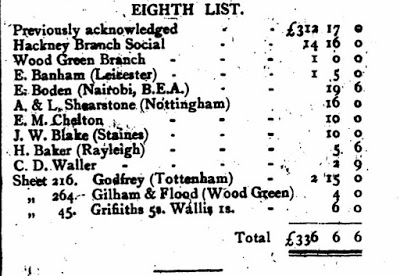