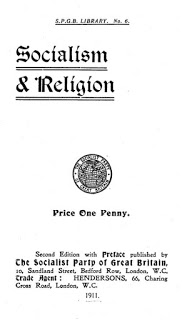 By the issue of the pamphlet “Socialism and Religion” the Socialist Party of Great Britain provides the event of the day and clearly distinguishes itself from all the hypocritical misleaders of the working class. Prior to the founding of the S.P.G.B. various organisations held the field claiming to know the way of emancipation. But, as in economics and in tactics, not one taught the workers the truth about their position, so as regards religion, all stands except the correct one have been taken. Particularly with the advent of the Labour Party and the wide-spread growth of quasi-Socialist sentimentalism during the past ten years, has regard for the truth in matters of religion declined. Labour leaders have cultivated the friendship of the professional propagandists of superstition. Everywhere we find them prating of how they have attained their “Socialism” through Christianity. Such was, for instance, the burden of Mr. Keir Hardie’s lay at the conference of the London Federation of P.SA. Brotherhoods, although there was a time when he could boast the sturdy but unrepentant secularism of his parents. But times have changed. The confidence of the Liberal and Non-conformist miners and petty tradesmen of Merthyr Tydvyl must not be abused nor their votes alienated. And so everywhere we find interested persons busy reinforcing this trembling bulwark of capitalism, repelling the independent thought of generations, the conclusions of science, in effect inviting the awakening workers to reject fearless, conscientious research and the promptings of the rebellious proletarian mind and to cherish rather their childlike faith and reliance upon their leaders. In a word the influence of the I.L.P and Labourite teaching on religion makes for subjection and emasculation. The S.D.P. attitude that “it is no concern of ours ” is no better. All are prepared to sink principle, truth and the mental vigour of the working class for the sake of popularity and the sweets of office.

Into this welter of humbug the S.P.G.B. throws the gage of battle. Religion in all its forms is a survival from primitive times. Its teachings do not correspond with experience and its perpetuation does but serve the interest of the oppressor. That is the contention of the new pamphlet.

Very essence of the intellectual accumulation of ages its message and challenge shall not be stifled by any conspiracy of silence—the members of the S.P.G.B. will see to that. Neither shall the correctness of its historical and ethnological data, its premises and logical conclusions be gainsaid. We are prepared to discuss the matter in the columns of the Socialist Standard, for necessarily the work will provoke much discussion and opposition. Meanwhile the revolutionary workers find in “Socialism and Religion” their true expression on this phase of the social problem, and with its aid will spread the light to those yet sitting in darkness.

On with the War ?