“Is Socialism Atheism? A Prejudiced Answer” by James Adderley, of the 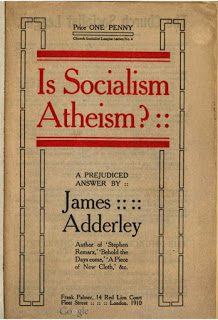 The value of this apology for the brain-softening affliction known as “Christian Socialism” may be gathered from a few quotations.

“Socialism,” says Mr. Adderley, “whatever it may have meant in days gone by, now means the Movement going on in all civilised countries towards a gradual change in the social system by which the State (that is the whole community, rich and poor alike) shall eventually own and control collectively for the common benefit the land and capital which is now, for the most part, owned and controlled individually for private profit.”

To know whether Socialism is Atheism it is obviously necessary to know, first of all, what Socialism is, and Mr. Adderley fails, consequently, at the very outset. His definition describes State Capitalism. His ideal is a nation organised into a kind of huge post office. “The poor ye have always with you,” Christ is reported to have said, and his faithful minister sees “rich and poor alike” even in the state of society he conceives as his ideal.

Starting with such a false definition of Socialism, the rest of Mr. Adderley’s pamphlet is wasted labour as far as his argument is concerned, but it is so typical of the mentality of the “Christian Socialist” that it may detain us a little longer. The very phraseology is of a piece with the rest —“ Movement going on . . .  rich and poor alike . . . shall eventually . . .  for the most part.”

His definition of Atheism is equally precise.

“A Christian who says he believes in God but manages his business without regard to honesty or justice or mercy is practically an Atheist. A man who says he does not believe in God but tries to be honest and just and merciful is less of an Atheist than the other. . . . Socialism, if it makes for justice, mercy, brotherhood, etc.,” [only one “etc,” Mr. Printer.] “cannot be called Godless or Atheist even if its professors say that they do not believe in religion,”

We do not, of course, disagree with everything Mr. Adderley says. We agree, for example, that

“The Labour Party in Parliament consists to a great extent of rather puritanically minded, unorthodox Christians.” (Page 11.)

He also states that Mr. Keir Hardie himself said in his (Mr. Adderley’s) hearing some 15 years ago: “Send me to Parliament for the sake of those for whom Christ died.” We understand that Mr. Hardie’s meaning was, of course, “ For Christ’s sake send me to Parliament!”

How little knowledge Mr. Adderley has of “human nature,” Socialism, or of sociology in general may be seen from the conclusion of his pamphlet:

To the understanding mind Mr. Adderley’s brochure is yet another demonstration of the incompatibility of Socialism with Christianity, in spite of the fact that it contains no discussion of the question worthy the name. Its title, indeed, is unjustified. It could have been entitled, with a much greater degree of justification, “From Nebulae to Balderdash.” Perhaps it is not yet too late. I offer the suggestion for what it is worth.