The Proletarian Revolution. by Karl Marx 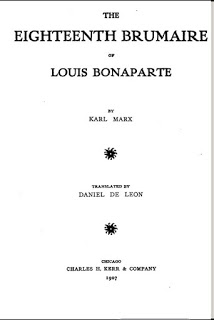 competition, French capitalist society could no longer understand that the ghosts of the days of Rome had watched over its cradle. And yet, lacking in heroism as bourgeois society is, it nevertheless had stood in need of heroism, of self-sacrifice, of terror, of civil war, and of bloody battlefields to bring it into the world. Its gladiators found in the stern classic traditions of the Roman republic the ideals and the form, the self-deceptions, that they needed in order to conceal from themselves the narrow bourgeois substance of their own struggles, and to keep their passion up to the height of a great historic tragedy. Thus, at another stage of development, a century before, did Cromwell and the English people draw from the Old Testament the language, passions and illusions for their own bourgeois revolution. When the real goal was reached, when the remodelling of English society was accomplished, Locke supplanted Habakuk.
Accordingly, the reviving of the dead in those revolutions served the purpose of glorifying the new struggles, not of parodying the old; it served the purpose of exaggerating to the imagination the given task, not to recoil before its practical solution; it served the purpose of rekindling the revolutionary spirit, not to trot out its ghost. . . .
The social revolution of the nineteenth century, however, can not draw its poetry from the past, it can draw that only from the future. It cannot start upon its work before it has stricken off all superstition concerning the past. Former revolutions required historic reminiscences in order to intoxicate themselves with their own issues. The revolution of the nineteenth century must let the dead bury their dead in order to reach its issue. With the former, the phrase surpasses the substance; with this one, the substance surpasses the phrase. . . .
Bourgeois revolutions, like those of the eighteenth century, rush onward rapidly from success to success, their stage effects outbid one another, men and things seem to be set in flaming brilliants, ecstacy is the prevailing spirit; but they are short-lived, they reach their climax speedily, then society relapses into a long fit of nervous reaction before it learns how to appropriate the fruitB of its period of feverish excitement.
Proletarian revolutions, on the contrary, such as those of the nineteenth century, criticise themselves constantly; constantly interrupt themselves in their own course; come back to what seems to have been accomplished in order to start over anew; scorn with cruel thoroughness the half measures, weaknesses and meannesses of their first attempts; seem to throw down their adversary only in order to enable him to draw fresh strength from the earth and again to rise up against them in more gigantic stature; constantly recoil in fear before the undefined monster magnitude of their own objects—until finally that situation is created which renders all retreat impossible, and the conditions themselves cry out: —

Blogger’s Notes:
Though it isn’t noted in the Standard, this passage is an excerpt from Karl Marx’s ‘The Eighteenth Brumaire of Louis Napoleon’. The wording in the passage suggests that it’s an earlier translation of Marx’s text, probably Daniel De Leon’s 1897 translation, which was reprinted by Charles H. Kerr and Company in 1907.
An explanation of how it came about that the SPGB had access to De Leon’s translation of Marx is possibly touched upon in Robert Barltrop’s ‘The Monument: the Story of the Socialist Party of Great Britain‘:

“Kohn became a socialist in his teens and was still very young when he set up as a bookseller. A minor flood of socialist works was under way in America, and Kohn became agent for their sale in London. Hence the regular journeys across the Atlantic, and the appearance on socialists’ shelves of books printed and published by Charles H. Kerr and Company, Chicago. Kerr’s was a small co-operative before the first world war it provided an entire library of theoretical and polemical works. Some of them were first-time translations of European social-democratic writings and of Marx and Engels: the great third volume of Das Kapital had its first — and for almost fifty years, its only — English publication from Kerr’s in 1909. There were Marx’s historical works; Engels’s Landmarks of Scientific Socialism, Socialism Utopian and Scientific, and Origin of the Family; Joseph Dietzgen’s Positive Outcome of Philosophy; Lewis Henry Morgan’s Ancient Society; Paul Lafargue’s Social and Philosophical Studies and The Right to be Lazy; and many more.”