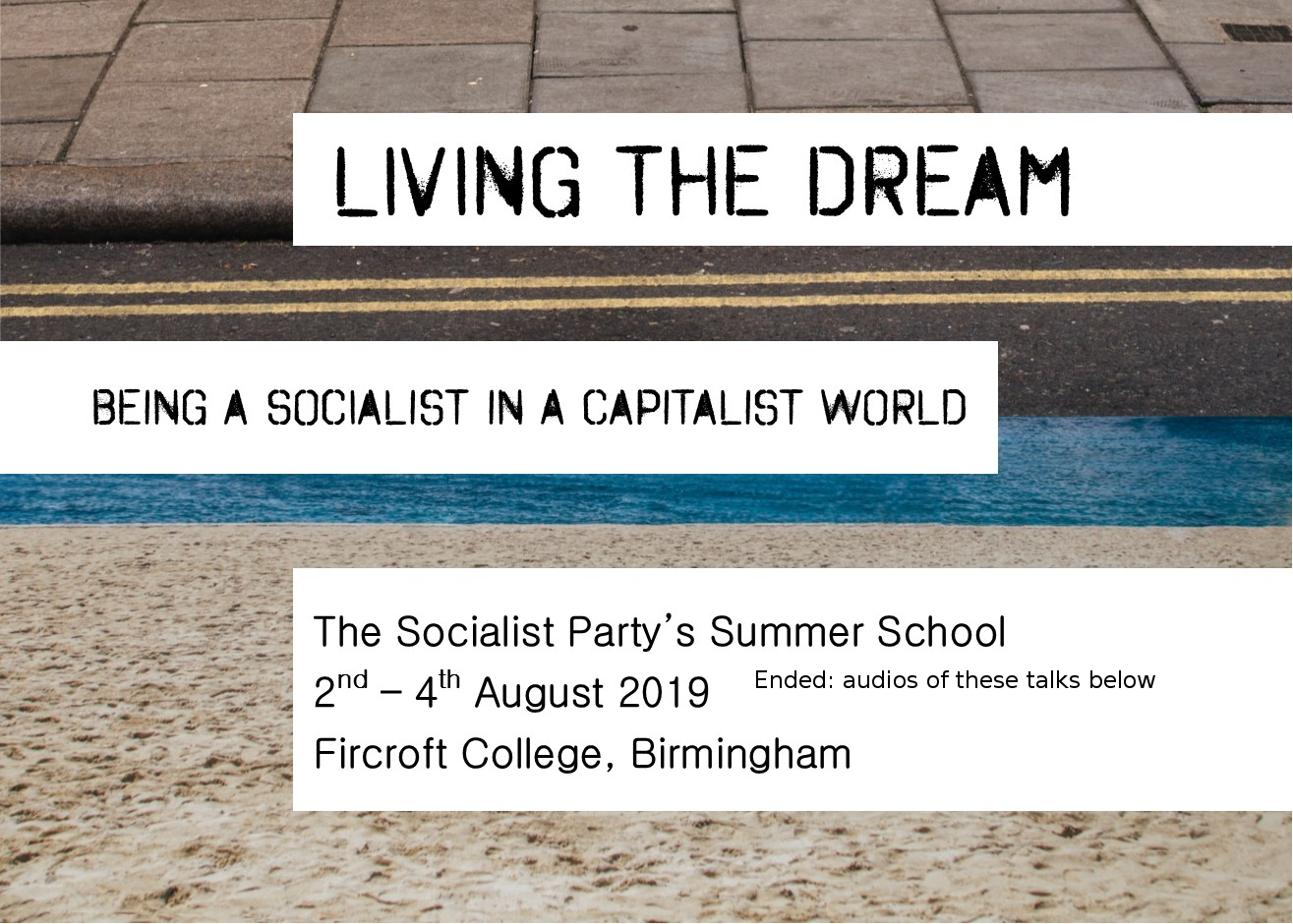 The audio talks for Summer School 2019 can be heard here. or use the links below.

Our political views are shaped by the circumstances we find ourselves in and how we relate to our situation. How does a socialist understanding of capitalism and the aim for a free and equal world compare with other political stances and belief systems? Why should we have a socialist viewpoint? And how does it impact on our lives? Our weekend of talks and discussion looked at what it means to have a socialist outlook in the 21st century.

Be Realistic: Demand The Inevitable

This talk looked at the notions of the impossible and the inevitable in a range of belief systems, including (but not limited to) socialism and other political belief systems. Why are people attracted to ideas that seem to be either impossible or inevitable? Or put off by them? What does it mean to campaign for something that might be impossible, or inevitable? What happens when assessments of impossibility or inevitability change? How do people believe that an impossible thing is true anyway? Or that an inevitable thing may never happen?

Besides socialism, the talk addressedimpossibility and inevitability in contexts such as liberalism, capitalism, flat earth, the end of the world, extraterrestrial life, Scottish independence etc.

Living In Capitalism As A Socialist

Living In Capitalism As A Socialist pt.1 Audio Player

Living In Capitalism As A Socialist pt.2 Audio Player

Profit is the backbone of capitalism and profit is made from a plethora of resources, the greatest and most easily attainable of which is the global human resource, to be found in any village, town or city anywhere on the planet. The capitalist system is well known for waste as a necessary part of maximising profit and there is no greater waste than that of the human potential trapped in non-productive, non-useful work.

This session took a look at the human misery attached to jobs, to work that many don’t really want to do but have to do to survive and also looked at the opposite position when human potential can be fulfilled to the satisfaction, and pleasure even, of billions of individual human beings.

“A map of the world that does not include Utopia is not worth even glancing at.” Oscar Wilde

Team Human’: Can You Live A ‘Socialist’ Life In Capitalism?

Someone recently wrote a book called ‘Team Human’ which emphasised that humans are social creatures who are most happy and fulfilled when working together for common goals. But how do we stay human in the vast anti-human infrastructure that is capitalism which constantly undermines our capacity to work together and connect with one another?

Despite the powerful forces that set us against one another (employment, nationalism, monetary gain), people are at their happiest when associating together in, for example, clubs, societies, family groups and social and political activities, which involve working with and helping other human beings. Socialists do this too. They belong to local clubs, community groups and trade unions. But how do they – or should they – react to being asked to go further and be associated with campaigns which involve, say, lobbying governments to improve conditions in particular areas, signing petitions calling on political parties to support certain changes in the law, or being members of or giving money to charities which seek to remedy deficiencies in social provision (e.g. housing, health care) or to save people from the consequences of sudden disasters, natural or man-made?

The Socialist view is that time spent in attempts to reform capitalism is time wasted. But on a human, day-to-day level, Socialists often find it difficult just to stand by and do nothing. So how do we cope with the constant dilemmas thrown up by wanting to spend our time helping to create a truly associative social system, yet constantly being called upon to help patch up the contrary arrangements fundamental to capitalism?

In 1264 the Baron’s war (which historian Adrian Jobson characterises as the First English Revolution) saw a wide-scale attempt to inhibit the power of the monarchy. It was a revolt in which the burghers (bourgeoisie) of London played a significant role. This struggle saw the birth of the English Parliament, but it would be a further 400 years until the final constitutional curbing of the power of royalty lead to the social dominance of the capitalist class in England.

As socialists, we see and understand the world in a very particular way and what is once seen cannot be unseen. How did we get here, and how has this affected our lives, our families and friends? Has being a socialist been a source of frustration, confrontation and disappointment or has the party case been an enlightenment and given us a sense of clarity and sanity? Or all of these things? Sometimes, thinking the way we do can be a lonely business.

Members and sympathisers got together to share our stories.

People were welcome to just attend the talks, but needed to book a visitor place in advance by emailing us.