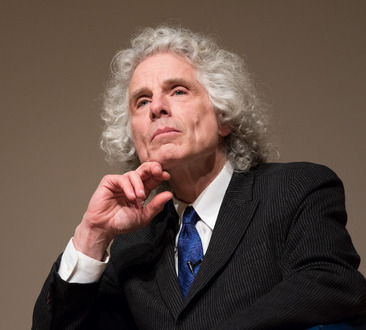 Like a fearful angel, you don’t need to tread far into the recent works of Steven Pinker, particularly The Better Angels of our Nature (2011) and Enlightenment Now (2018), to get the gist of his popular thesis that today is better than yesterday and tomorrow will be better still, so long as states maintain control and reason triumphs over savage instinct. Better Angels is Bill Gates’s favourite book, and it’s not hard to see why.

The appeal is in the sensationally anti-intuitive optimism and the simplicity of the argument. A clear line is drawn from barbaric prehistory through the murderous Middle Ages all the way to the relatively placid present, in a bid to demonstrate the ‘civilising process’ embodied by states, which has led to universally declining levels of violence. Pinker doesn’t claim it’s a new idea, and indeed bases much of his argument on Norbert Elias’s The Civilizing Process, published in Germany in 1939 (a not-insignificant date, as we shall see).

It’s also an idea with some good prima facie evidence supporting it, at least for Western Europe during the last few centuries, at least for average civilian homicide rates. Few historians would argue that murder rates in this part of the world have not declined substantially over that period.

But zoom out, and the price of this simple linear argument seems to be that all other lines and details have been overlooked, rather like a large-scale geographical map from which all roads and features have been erased, apart from the one single highway that Pinker wants you to follow.

Predictably, this has enraged academic historians, who liken Pinker to a visitor who enters your house in muddy boots and then sticks his feet up on your living room table. Now, frustrated by the fact that ‘Pinker’s message is reaching the masses, and ours is not’, many of these historians, some of them from Pinker’s own Harvard University, have joined forces to deliver a devastating counter-blow (The Darker Angels of our Nature: Refuting the Pinker Theory of History & Violence, edited by Philip Dwyer and Mark Micale, Bloomsbury, 2022). There are 18 chapters written by experts in pre- and medieval history, early modern Russia and Japan, the Enlightenment, the British Empire, and histories of the environment, sexual violence, race, and the myth of a universal human nature. Some contributors offer a cool and detached evaluation of Pinker’s methodology, while others write with barely concealed rage at his blithe effrontery and cavalier lack of scholarship.

Pinker’s approach to evidence is variously described as shoddy, egregious and cherry-picking. He quotes sources that suit his argument, even if they’re only coffee-table books (like The Great Big Book of Horrible Things), and ignores vast swathes of respectable research that don’t. For instance, the medievalist Sara Butler writes: ‘Pinker has never seen a medieval court record, nor does he understand how the law worked in the Middle Ages… When he measures medieval against modern statistics, he has no idea that they are measuring very different things… without valid statistics, Pinker’s entire argument falls apart’ (p136).

If you ever wondered how Pinker could possibly know the murder rates in medieval times, with its patchy records, or in prehistory, with almost no records, you’ll find academic historians asking exactly the same question. Pinker doesn’t know, he’s guessing, and relying on estimates which are themselves sometimes wildly inflated and ideologically suspect, like those of Catholic missionaries estimating the supposed violence of heathen Native Americans. If you as an archaeologist dug up two Iron Age skeletons, and one had had its head bashed in, you wouldn’t automatically conclude that the murder rate must have been 50 percent. Archaeologist Linda Fibiger certainly wouldn’t. She studied 1,000 human remains from 150 sites spanning 3,000 years and made tentative conclusions on interpersonal violence only for that period and only within that geographical range. Pinker makes continent-wide conclusions based on 21 individuals from one Jutland cemetery (p.115).

What we discover, in chapter after chapter, is that Pinker is massaging the evidence, upwards in the case of the past, to make violence and ‘savagery’ look much worse than it really was, and downwards in the present, to make the world seem more peaceful than it really is. To take one example, he cites one claim that the Spanish Inquisition executed 350,000 Jews in 350 years, which was nearly twice the total population of Jews in Spain during that period (p.128). He also name-checks an eminent researcher but without mentioning the researcher’s own estimate of executions for the same period at around 810, a figure widely considered more reliable. This figure generates its own irony, as it would mean that Pinker’s own ‘civilised’ USA, with 1,526 executions between 1973 and today (p.270), has executed almost twice as many people as the Spanish Inquisition, and in a fifth of the time.

In reality, much of the historical evidence suggests the opposite of what Pinker claims. The Middle Ages was not addicted to cruel executions, which were in fact rare, and most punishments were in the form of fines. Early modern Russia, considered ‘uncouth’ by Western standards, executed far fewer people than its neighbouring European countries, and with less Grand Guignol cruelty. The Enlightenment, rather than civilising society, served to justify unparalleled colonial and racist violence, while excluding whole categories including women from supposedly universal notions of human rights. There’s a pattern to all this, and you can easily find other examples yourself. For instance, the ‘Wild West’ was arguably less violent than the modern USA and had more robust gun laws (bit.ly/3wYwj7S).

Pinker is unashamedly a neo-Hobbesean, arguing that in ‘non-state societies’ we humans are ruled by our inner demons – predation, dominance, revenge, sadism and ideology (‘ideology’ here meaning fascism, Marxism etc, but not his own perspective, which doesn’t count), whereas the benevolence of disinterested elites (like himself) and the ‘gentle commerce’ of capitalism have ‘gifted’ us modern civil liberties and allowed the predominance of our ‘better angels’ including empathy, self-control, a moral sense and reason. At no point does he consider that these modern freedoms had to be fought bitterly for, and in fact sees any social dissent or struggle as counter-productive and ‘de-civilising’.

And here is where Elias, a German Jew writing in 1939, becomes relevant again. His theory of states as a civilising influence presupposed that the state itself was benevolent. Elias ended up doubting his own assumption (p.101) precisely because of what subsequently happened in Europe. Yet Pinker skates over all this, dismissing the Holocaust as a statistical outlier that doesn’t affect his main argument. Awkward details don’t trouble him, as he ‘only travels on the sunny side of the street’ (p.66), trading in ‘comfort history’ and ‘Pinkering’ the evidence (p.305). Though Better Angels, at 800 pages, seems to follow the principle that ‘if you say it enough, it becomes true’ (p.176), Ben Kiernan’s Blood and Soil – Sparta to Darfur (2007) concludes, in 700 pages, that genocidal violence is as bad today as it’s ever been (p.332). With Pinker, one is irresistibly reminded of Voltaire’s Dr Pangloss, for whom everything is for the best in the best of all possible worlds.

Finally, modern historians are suspicious of linear historical narratives, because linearity always involves leaving stuff out. Nowadays they prefer more ‘webby’ approaches which reflect the diverse and often contradictory nature of the evidence. Marx the dialectician would have approved of this approach, so it’s a shame that one or two contributors in this book see him as part of the problem, a linear teleological thinker plotting a deterministic path to the future. This is to take the same one-sided view of Marx that Pinker takes of history. In all probability, judging from the withering scorn that Marx levelled at the half-baked and self-serving bourgeois thinkers of his own day, he would have given Pinker a roasting that even the sharpest condemnations in this collection would struggle to match.

Next article: Marxism and Leninism in Myanmar ⮞