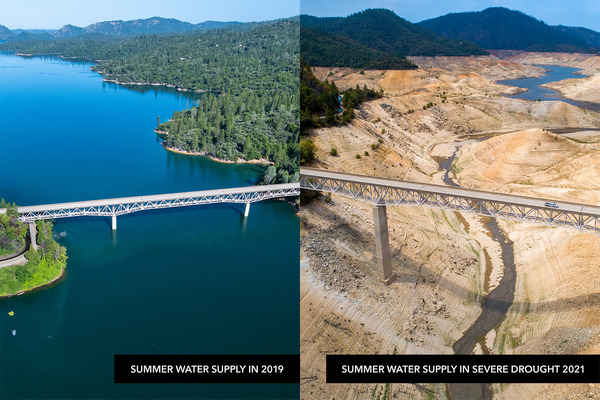 Much of our planet is suffering from heatwaves and droughts with record-breaking temperatures and the experts say it is not isolated incidents but a harbinger of weather events that will become increasingly common in the future as global warming increases.

Namrata Chowdhary of the environment activist group, 350.org, stressed that ‘the truth behind these heatwaves is searingly clear: fossil fuels did this. While these temperatures are quite literally shocking, they come as no real surprise to communities that have long since lived on the frontlines of the climate crisis.’ Chowdhary continued, ‘This is the latest spike in a rapidly worsening disaster, one that was foretold by climate activists the world over.’

Nushrat Rahman Chowdhury, co-author of a Christian Aid report, said: ‘Drought is not new, but its intensity and frequency have increased over the last 30 years due to global warming. It is a real danger; it threatens lives and livelihoods of some of the poorest people in the world, who have done the least to cause the climate crisis’.

Over 1.2bn poor people across the globe are highly vulnerable to extreme heat, which is 28 million people more than in 2021, according to Sustainable Energy for All (SEforALL).

The western states of the United States are suffering one of the worst droughts in a thousand years. California is in its third year of drought and virtually all areas of the state are classified as either in severe or extreme drought. However, US farmers will get insurance payouts, although this means rising premiums, and also are entitled to government tax subsidies.

European countries such as France and Spain are also being subject to punishing drought conditions. However, in Africa it leads to hunger and migration, since it is the poor who are the most vulnerable victims.

The poor do not have access to indoor cooling and the infrastructure in the slums makes life even harder, plus they often do outdoor construction and agricultural work with no shelter during the worst of the day’s heat. Heat is a silent killer, often responsible for more deaths than higher-profile disasters like floods, hurricanes or tornadoes, and the rising toll is expected to worsen as the world warms. In 2010, a heat wave in India killed 1,344 people in the western Pakistan city of Ahmedabad alone. In 2015, a heat wave killed more than 1,000 in the capital, Islamabad. However, due to inadequate death registration procedures this is likely to represent an undercount for the whole region.

The World Weather Attribution group analysed historical weather data and suggested that early, long heatwaves that impact a massive geographical area are rare, once-a-century events. But anthropogenic climate change has made these 30 times more likely. That may be a conservative estimate as another study by the UK Met Office said climate change makes heatwaves in north-west India and Pakistan 100 times more likely. That means the region may now see such events in excess of record 2010 temperatures every three years. If it were not for climate change, these events would happen just once every 312 years.

In 2018 Cape Town, in South Africa, was the world’s first big city to almost run completely out of water. That problem hasn’t gone away. The charity Christian Aid warned that in addition to Cape Town, London, Sydney, Beijing, Cairo and Phoenix are all in danger of running out of water as the climate crisis takes hold, according to its report, ‘Scorched Earth: the impact of drought on 10 world cities.’

Two-thirds of Africa is desert and dry savannah with 45 percent of Africa’s land area affected by desertification, more than half of which is at very high risk of further desertification. Africa has suffered from drought more frequently than any other continent with 134 droughts between 2000 and 2019, of which 70 occurred in East Africa, 14 extreme cases in the past two years alone. A fourth season of failed rains is causing one of the worst droughts East Africa has seen in decades and the UN’s World Food Programme says up to 20 million people are at risk of severe hunger. In Somalia, 40 percent are facing starvation as the food and water supply becomes desperate. Millions of children are malnourished, while the domestic animals that families depend on have died. While in southern Africa Angola is facing the worst recorded drought in 40 years, with southern provinces where 1.58 million people are suffering high levels of acute food insecurity having experienced the fifth consecutive year of drought conditions.

Droughts are being fuelled by climate change, and so only global action can make a difference. Our urgent need is building a world of coordinated mutual aid which is integral to our case for a cooperative commonwealth for the future – world socialism. As explained in last month’s Material World (tinyurl.com/2p8wzdr5) socialism may be Africans’ last hope to change their dire situation and conditions.