To paraphrase a recent radio comedic comment, had Napoleon really wanted to take over Britain, rather than an army all he needed was to offer an extra two days’ bank holiday. Then he would have been welcomed with cheers and bunting.

This satirical response was a none-to-serious explanation for the popular enthusiasm for the present monarch’s platinum jubilee. Indeed, it can be difficult to understand why people who are increasingly struggling against economic challenges should wish to celebrate the present wealthy incumbent of a feudal institution adapted to the political needs of capitalism. 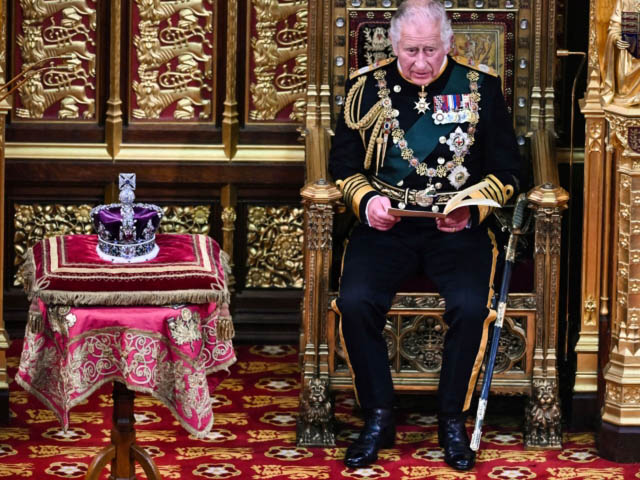 At the recent state opening of Parliament, due to the absence of the queen, the throne was occupied by her crown, an object of monetary value enough to ease the fuel poverty of a huge number of her impoverished subjects. Yet many will have spent some of their sparse and dwindling financial resources on plastic bunting made in China.

As Brexit and the 2019 general election demonstrated, there remains a strong nationalist resonance, a significant bulwark protecting the status quo. There will have been very many who did not deck their homes in red, white and blue, or watch the seemingly endless sycophantic ‘news’ items and kitsch TV programmes, yet still were broadly sympathetic to the event.

The jubilee is an indication of the seemingly Sisyphean task facing socialists arguing that the working class needs to take responsibility for, and actively pursue, abolishing capitalism in favour of a new, true commonwealth. This will be a worldwide society of democratically achieved common ownership of production for need not profit.

It will certainly be a world without leaders, monarchs or otherwise. Those who count themselves republicans will have taken exception to the jubilation, demanding the hereditary monarchy be replaced by an elected president. While superficially this appears more democratic, effectively it changes little.

A cursory glance at countries with presidents is not encouraging. The USA is the self-proclaimed land of the free, but it’s a freedom to live in dire poverty for all too many, with racial divisions and a small financial elite hell bent on preserving their freedom to remain obscenely wealthy.

The ineffective nature of the US presidency when it comes to helping resolve social issues is shown by the continuing slaughter of school children to preserve the free market in assault rifles. The president may weep, but it’s nowhere near the flood of tears shed by grieving parents.

President Putin is as readily seduced by martial ambitions as ever the Tsars were and presides over a country afflicted by poverty, be it of workers not peasants. In France nationalism remains a curse and is no more economically progressive, whatever that might mean, than Britain. The challenge to republicans is to identify one republic that is a significant improvement on British monarchy.

The problem is that a huge effort would be required throughout the UK to convince enough of the electorate to trigger a referendum and then vote for the abolition of the monarchy in favour of a republic. Having achieved that, then nothing would have significantly changed. Capitalism can comfortably continue with a presidential head of state as it does in most of the world. As Belloc suggested, most people will ‘always keep a-hold of nurse for fear of finding something worse’.

Here lies the nub of the issue. It is not that monarchists are more deluded than republicans, rather it’s the fact the working class has not yet grasped its potential to look or move beyond capitalism. To do so there needs to be an ideological shift to an understanding that leaders, actual or symbolic or both, cannot deliver such a transformation on behalf of the working class. New political forms will have to be developed, transcending present institutions.

This is what is meant by revolution, not barricades and street fighting, the storming of Winter, or any other, palaces. The revolution comes about by men and women democratically making their own future through a radical change in thinking that emerges from an understanding of the material reality of the present. Monarchs and presidents are both barriers that will have to be overcome through a popular understanding of their role in preserving present social, economic and political arrangements.

In any society, the seeds of the future are sown even if the social soil is not so fertile as yet. Many of the jubilee events, street parties, community picnics and the like, were people freely working together cooperatively without any incentive of financial reward, often the opposite, for a common goal. Such examples show that people can and will work without being wage slaves requiring the threat of the lash of poverty.

A street party works because people contribute what they can – sweet, savoury, alcoholic or non-alcoholic, bunting, music and so on. Then people take what they need, even those who didn’t contribute due to their particular circumstances, too elderly for example.

While there are no moments of socialism while capitalism exists – all those elements for the street party will have been commodities produced for the realisation of profit – there is social motivation that gives a glimpse of what is possible.

This is not to suggest in any way that the motivation behind jubilee events was socialist-inspired. However, socialists must be aware that no matter how much they might deplore the overt motivation behind the events, the capitalist state’s ideological reinforcement of its legitimacy, there is nonetheless an underlying if presently unconscious potential.

The jubilee weekend came and went. By Monday the bunting was already starting to look incongruous and, like street party memories, beginning to fade. Capitalism is already reckoning the balance sheet, lost production due to time off set against increased retail sales.

As the present monarch becomes increasingly frail the state will have plans in place for the succession. Should the royal family then prove to be as dysfunctional as its recent history suggests it might be, republicans may get their moment. Then, no doubt, there’ll be an extra bank holiday to mark the inauguration of the new president. More plastic bunting from wherever capitalism has shifted production to by then.

Or, maybe, a different way of doing things altogether…

Next article: What has the monarchy done for us? ⮞