Ukraine: Good Against Evil . . . Or More Complicated Than That? 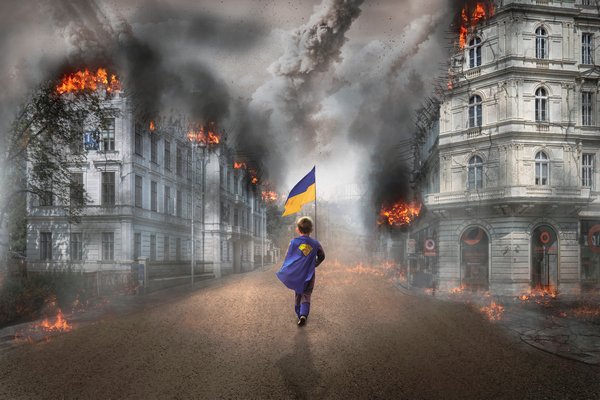 The war in Ukraine has led to much sympathy and solidarity from people across Europe and beyond. And in a way, this is both understandable and heart-warming. Few want to see innocent people bombed out of their homes and turned into refugees, fleeing mass killing. The assistance people have been prepared to give Ukrainian refugees has been a testament to the basic solidarity and mutual support socialists have always said we are capable of as human beings.

The media have largely portrayed this war as a battle of good against evil. Socialists know that wars in modern capitalist society are never quite that simple. Sometimes the motivations for war are transparently economic (eg the Gulf Wars), while at other times there is a complex geo-political element, with states manoeuvring for political advantage and seeking to extend or defend their spheres of influence (the Falklands War was closer to this).

The Ukraine situation is complicated and most people (including us) did not expect armed conflict to actually break out. The ‘good versus evil’ scenario that is the dominant narrative doesn’t quite fit and as usual other factors are at play.

Over time, political democracy, imperfect though it always is within capitalism, has emerged as the dominant and favoured way for the ruling classes of nation states to manage their affairs. This has come about for a number of reasons – some because of political pressure from the working class wanting a say in how society is organised and run (eg the Chartists in Britain in the nineteenth century), but also because the owning class is rarely united. It is typically a mass of competing interests, not just between states but within them as well. Financial capital (such as the banks) often has different interests to industrial capital for example, and political democracy is a good way of the state arbitrating between competing interests.

Many states though take years to develop this type of democratic practice and culture as they have little by way of a tradition in it. Indeed, since the Second World War, while numerous states have gravitated towards elements of political democracy across much of the world, some have done it much more successfully than others. This is the story of many of the states that either emerged or reinvented themselves after the collapse of the old Soviet Union in the early 1990s, including both Russia and Ukraine. Both have elements of capitalist political democracy but in an obviously deformed way, and the type of political corruption that tends to exist at the fringes of more mature capitalist states like those in Western Europe, North America, etc tends to be more entwined with the state apparatus at a deep and fundamental level. Their past authoritarian cultures have had a lasting impact.

The think-tank Transparency International (not above controversy itself) produces an annual Corruptions Perceptions Index which ranks countries according to general perceptions of corruption and theft in their state machinery and operations. In 2021 Russia ranked a lowly 136th out of 180 listed states. Interestingly, Ukraine was little better at 122nd in the world as graft, corruption and client-politics there are legion. This manages to put both Russia and Ukraine even lower than dictatorships such as Cuba (64th) and China (66th).

Most politics in Ukraine is dominated by ethnic and nationalist considerations, with what could be described as the right/left political spectrum associated with more mature democratic states barely in existence. This situation is blurred slightly by the fact that Ukraine currently has a government led by a president (Zelenskyy) and party (Servant of the People) that have an orientation that is at least broadly aligned with some conventional notions of Western parliamentary democracy, including aspirations towards membership of the European Union.

Russia on the other hand has more obviously still struggled to shake off decades of authoritarian control and culture and is run by what appears to be an ever-smaller clique led by President Putin, an elected dictatorship in all but name. Checks and balances on authoritarian actions and adventures are low and Putin has long hankered after recreating what some would refer to as the old Soviet Union without much of the associated Leninist politics. It could be seen even more easily as a recreation of Tsarist Russia, an empire which also included most of what is now Ukraine and parts of many other Eastern European states.

Whenever Putin sees an opportunity to embark on a military adventure in pursuit of this goal he has a tendency to move fast, with few if any challenging voices around him in the Russian hierarchy. The usual manoeuvrings and diplomacy around these situations by other states effectively become cast as an excuse to do what he most likely wants to do anyway (as with NATO expansion into the East). This then – at least in theory – strengthens his internal and external position as the leader of an empire trying to regain its ‘rightful’ position among the nations. This worldview has been exacerbated by longstanding grievances, both related to Russia’s historic standing and defeat in the Cold War, and also personal slights such as when his mooted interest in Russia itself joining NATO over two decades ago was rebuffed by both Bill Clinton and George W Bush.

In addition, Russia has its own clear economic interests too. As such, in 1994 it sought to set up its own trading bloc which came to full fruition in 2011 when seven other countries agreed to join it in a free trade area. These were Belarus, Kazakhstan, Kyrgyzstan, Tajikistan, Armenia, Moldova and Ukraine. But the orientation of Ukraine along with many other Eastern European states towards the EU led it to sign a ‘Deep and Comprehensive Free Trade Agreement’ in January 2016. Since then, Russia has suspended its free trade agreement with Ukraine and Ukraine retaliated by passing trade restrictions on Russia.

Russia has long created issues for the West that it has struggled to resolve. Doing deals with the oligarchs while watching Putin help rip up various geo-political agreements made in the 1990s after the fall of the Soviet Bloc has created a certain cognitive dissonance, but until recently it was the money that largely won out. Since the collapse of the USSR in 1991, the oligarchs who stripped the state of many of its assets for a massive profit have found a welcome home for the most part, particularly in the UK. The debutant balls that take place in Mayfair each summer are no longer arranged for Sloane Rangers but for the sons and daughters of the Russian elite. Many of the top FTSE 350 resources companies quoted on the London Stock Exchange are Russian – such as Evraz, Polymetal International and Petropavlovsk. The oligarchs and their families who own football clubs and newspapers had become ever more integrated into Western capital and it is hardly surprising, as they have qualities, connections and money admired by the elites in the West.

According to The Economist, 41.3 percent of Russia’s exports come to the European Union and the UK, while 34.5 percent of its imports originate from the EU and UK. The massive sanctions that have now been imposed as a result of the war in Ukraine will hit this considerably and it is clearly something the West would not have otherwise countenanced.

Arguably, the move to expand both the EU and NATO to the East have ‘provoked the Russian bear’, but it is a bear they have been prepared to happily play with for quite some time. This too despite the Russian invasions of Chechnya (1995), Georgia (2008) and Crimea (2014). And many on the political left have been closet apologists for Putin on the grounds that an enemy of an enemy must be a friend, irrespective of the discrimination and human rights abuses of the Putin regime and the fact that most of them would most likely end up in prison there just for promoting the views they have.

So, one way or the other the war in Ukraine has interrupted business as usual, as wars tend to do. The previous Russian invasions of adjacent territory were not welcomed by the West but not proactively resisted either. Ukraine is too big, too close and the situation now perhaps too grotesque in some aspects for them to turn the other cheek completely. They will not wish to get involved militarily (at least not in an active sense) as that might provoke an even worse escalation, so the retaliation will be economic in essence, building on Ukraine’s own sanctions against Russia since 2016.

It is a mess, but the sort of mess capitalism delivers all too frequently. Socialists have sympathy with the oppressed and those struggling for basic democratic rights everywhere but don’t take sides in conflicts between elites. We know all too well that the victors soon become the oppressors (as happened in Russia itself post-USSR). To put it bluntly, we are on the side of both the Ukrainian people getting bombed out of their homes and the Russian soldiers getting murdered in battle because of the imperial fantasies of the leader who ordered them there.

2 Replies to “Ukraine: Good Against Evil . . . Or More Complicated Than That?”