Life and Times – Will We Always Have Food Banks? 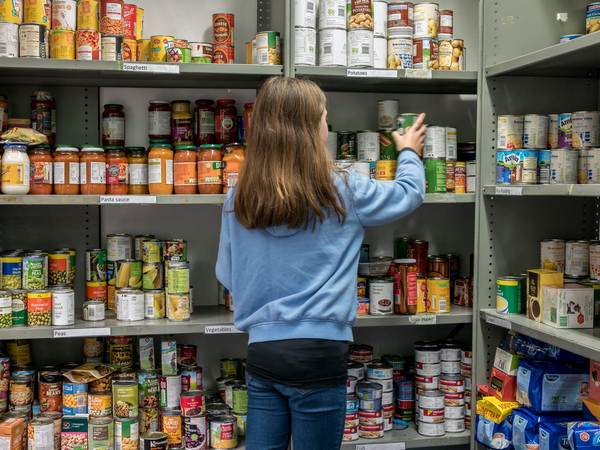 This week we are looking for:

said a post on my local community Facebook page calling for contributions to the week’s food bank collection. It went on: ‘Please try to help us, I will be at Pantygwydr Church on Tuesdays between 9 and 12.30. Food can still be dropped off on Mondays to Fridays at the Church between 9.30 and 12.30. Thank you for your continued support, you lovely people. Well done to you all.’

Enough to go round?

That this food bank ‘thrives’ is at one and the same time both a tribute to people’s kindness towards their fellow human beings and a matter of unutterable sadness that it is necessary at all. Though exact figures are hard to ascertain, a House of Commons Library report from 14 July 2021 stated that ‘both the number of food banks and the quantity of emergency food parcels they distribute have increased. In February 2021 there were over 1,300 Trussell Trust food banks in the UK, in addition to over 900 independent food banks’. It has been further estimated that, in 2021, up to 10 million people will have depended on food banks.

Of course, the UK is by no means alone among ‘developed’ countries where people either go short of food or are driven to the humiliation of queuing to be handed it from stores by volunteers. The USA, for example, the wealthiest country in the world, has a chronic problem of hunger, with 35 million people suffering severe food insecurity, especially among the 3.5 million of its population who are without homes – even while the number of vacant homes is 18.6 million. And, according to United Nations data from 2019, 746 million people worldwide – nearly 10 percent of the earth’s population – are likely not to know where the next meal is coming from.

Yet all this is happening in an era when, according to Tristram Stuart’s book, Waste, ‘farmers worldwide currently provide the daily equivalent of 2,800 calories of food per person – more than enough to go round’ and he goes on, if food were produced and distributed rationally (by that we understand for need rather than for profit), there could be enough to feed those going hungry 23 times over. So there is patently enough to feed everyone on the planet. Yet large numbers continue to go hungry – or even die of malnutrition – and, even in countries where food is manifestly plentiful, many people are still forced to have recourse to food banks.

So what do we do about a situation in which existing resources are not in themselves a limiting factor to feeding the whole world at a decent level? Various ideas have been put forward. The 2020 book by Carolyn Steel, Sitopia. How Food Can Save the World, for example, argued that world hunger could be solved by making the existing structures of money and the market work more benignly and cooperatively. And now the ethnobotanist James Wong, presenter of the BBC’s ‘Follow the Food’ series, has made a BBC webcast entitled ‘How We Can Reach for a Food Utopia’ (tinyurl.com/25bc8hbn), in which he too proposes ways of feeding the world adequately. He asks the question ‘What if we could reimagine the global food system so that it worked perfectly?’ He attempts to answer this by talking about food being made ‘more affordable, either by making it less expensive, or by tiering it based on people’s incomes’, and he explains how food could be produced in far greater quantities using fewer resources and less land, water and carbon using such methods as hydroponics and vertical urban farming with robots. He also talks about how negative environmental impacts can be remedied by using technology such as drones, satellites and GPS and by making basic natural processes such as photosynthesis more efficient with new innovative techniques.

But among all this, James Wong fails, as Carolyn Steel did before him, to consider that, no matter how technologically efficient food production may become, under the current economic system it can only feed the people with money in their pockets to pay for it. We could, it seems, produce at least ten times as much food as now, but, as long as the buying and selling of it stands in the way, the world’s hungry or less well fed will not have access to that food. This is what the scientific and technical experts who write about food, no matter how well meaning they may be, seem incapable of taking into account. They either fail to understand or do not want to understand that use of the current system of money and markets to produce and distribute food, regardless of any tweaks to it that may be proposed or enacted, will never cease to lead to massive wealth for the few and hunger or the food bank for many. Adequate resources to provide a decent life for all are indeed available, but that decent life cannot be realised under the profit system. It can only be possible in the kind of moneyless, marketless society that we stand for.