Kharkov is Ukraine’s second city, with a population of 1.4 million. Being in the country’s northeast, just 25 miles from the Russian border, its northern and eastern districts soon came under heavy shelling. The website of the Kharkov anarchist group ‘Assembly’(assembly.org.ua) describes life in the city at the end of February and beginning of March.

By March 3 the daily output of goods and services in Kharkov had fallen by about half. Many factories had come to a standstill. Many stores had closed their doors. Some firms were still paying wages to their workers, but many were not. Tens of thousands had taken shelter underground in the thirty metro stations, with the ‘Heroes of Labour’ station alone accommodating over 2,000.

How did people behave in these dire circumstances?

There were many who exploited the situation for their own profit. The ‘Assembly’ website provides a blacklist of employers who used the threat of unemployment to cut wages, lengthen hours and impose harsher working conditions. Taxi drivers demanded extra payment over and above the fixed tariffs. Thieves had a field day.

However, there were also many who volunteered to help others. Some voluntary efforts were initiated by the city administration. On February 28, for example, the mayor visited a bakery, where he called for volunteer drivers. But there was also a wide range of grassroots initiatives. 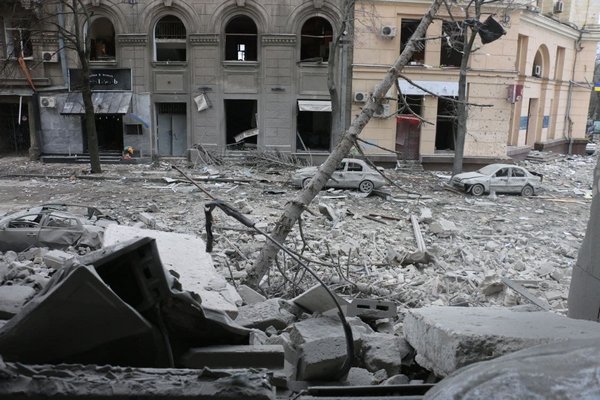 Oleg and Yulia Koval lived in Northern Saltivka, a residential district whose location on the northeastern edge of the city exposed it to especially heavy bombardment. They could have just got out and saved themselves. That would have been the ‘sensible’ thing to do. But instead they stayed on in order to help fellow residents evacuate, ferrying them to the railway station and supplying them with food and medicine. One day Oleg returned from a shopping trip to see that their home was now a pile of rubble. In the rubble he found his wife’s body. He resolved to continue the work in honour of her memory.

The ’Assembly’ website displays several photos of volunteers transporting, preparing or cooking food for free distribution or giving food away on the street or inside metro stations (where volunteers also set up public toilets). A man from the countryside with two boxes full of apples, handing them out to passersby. Packages of chicken, ground meat and liver being distributed from the back of a truck in the vicinity of Kharkov airport. Kitchen workers at the ‘Mafia’ Restaurant cooking meals for children’s hospitals and the military.

And advertising posters that inform the public what goods a firm has to give out, inviting would-be recipients to call so-and-so. Thus, ‘Mr. Bourbon Coffee’ café can provide 100—150 litres of distilled water a day. And there are also volunteers who bring food and medicine to people unable to leave home.

Unfortunately, the website does not explain how all this production and distribution for use – the commentators call it ‘disaster communism’ – came about. Did the owners of the firms involved give their consent? Or had the workers taken control after the owners fled the country?

A few of the photos on the website reveal a less inspiring aspect of life in besieged Kharkov. One shows a man tied to a lamppost and with the word marodyor scrawled across his face. Others show men lying half-naked on the ground, tied up in rather uncomfortable postures and with the same word painted on their backs.

We are not told exactly what these men had done to deserve such humiliation and discomfort or who had imposed their punishment on them. Marodyor can mean looter, marauder or – more colloquially – profiteer. It is unlikely that it means ‘looter’ because public opinion in Kharkov does not condemn theft or looting as such. Indeed, we are told that an elderly woman who shoplifted food right in front of a surveillance camera became ‘heroine of the day’. It was alright to steal food if you were hungry. And it was alright to loot from abandoned stores or street kiosks in order to distribute the stuff freely to others. Otherwise, after all, it would only have gone to waste. Presumably looting became unacceptable when conducted with a view to selling the loot and making a profit out of it.

The experience of Kharkov under bombardment confirms the conclusions drawn by writers who have investigated the social impact of other disasters – for instance, Rebecca Solnit in her book A Paradise Built in Hell: The Extraordinary Communities That Arise in Disaster (Penguin Books, 2010). Disaster sometimes brings out the worst in people, but very often it brings out the best – a greatly enhanced willingness to cooperate and help others. ‘Human nature’ is not an insuperable obstacle to socialism. On the contrary, socialism is the natural way of life of our species.