Neither God nor state 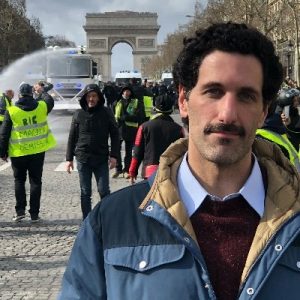 The 1st of this month is Iranian Islamic Republic Day. According to Ramin Mazaheri (greanvillepost.com, 6 February), ‘…after 43 years Iran’s revolution has become entrenched in global political history as the most successful political revolution of our contemporary era’ (bit.ly/356Z1Ka). Apparently the vast majority of the 99 percent (98.2 percent) of the electorate) voted for the establishment of an Islamic republic. Those who realise they were taken for April Fools include imprisoned trade unionists. Tragically, over 43 years many thousands of our class have been executed, including minors, under a theocratic dictatorship where those convicted of adultery, alcohol consumption, blasphemy, burglary, homosexuality, pornography and prostitution, along with, of course, political dissidence, as well as many other ‘crimes’, can pay the ultimate price. We must not forget the state-sanctioned use of juveniles as troops during the mass slaughter that was the Iran-Iraq war, or the oppression of women. Add chronic corruption, obvious class division and we can say that only assorted fundamentalists see the revolution as successful. And the suffering grows:

‘Iran has returned 820,000 doses of coronavirus vaccines donated by Poland because they were manufactured in the United States… TV quoted Mohammad Hashemi, an official in the country’s Health Ministry, as saying that Poland donated about a million doses of the British-Swedish AstraZeneca vaccine to Iran. ‘But when the vaccines arrived in Iran, we found out that 820,000 doses of them which were imported from Poland were from the United States,” he said. Hashemi said “after coordination with the Polish ambassador to Iran, it was decided that the vaccines would be returned.” Iran’s Supreme Leader Ayatollah Ali Khamenei, who has final say on all state matters, in 2020 rejected any possibility of American or British vaccines entering the country, calling them “forbidden”‘ (whdh.com, 21 February, bit.ly/3BVqlH3).

Toll: more than 270,000 coronavirus-related deaths since the pandemic began.

‘In 2006, Nicaragua enacted a complete abortion ban, including in cases of rape, incest, and when the life of the woman is at risk. Access to sexual and reproductive health information and services is seriously lacking, and the country now has the highest rate of teen pregnancy in Latin America.’

Recall, Ortega was returned to power in 2007 as the Catholic president of Nicaragua. He named his wife as Vice President and stated: ’This revolution – in which women have participated shoulder to shoulder – has opened the doors to the full participation of women in all spheres: political, social and economic (theweek.co.uk, 4 August, 2016, bit.ly/3vlGRyT) – nonsense only matched by that of another President, Ronald Reagan, calling Nicaragua a beachhead of communism. Nicaragua is one of 24 countries in the world where abortion is totally illegal under any circumstances, including when the woman’s life or health is at risk. Maternal mortality is 98 per 100,000, 118th in the world. And leftist/nationalist fundamentalists claim that the empowerment of women in Nicaragua has been achieved.

Cannot see the wood for the trees

‘Conflict, climate change, and COVID-19 are having a clear impact on the global poor, in many cases having joint incidence upon those living in poverty, the World Bank’s report concludes’ (‘Inequality Kills One Person Every Four Seconds,’ipsnews.net, 14 February, bit.ly/3JOwGH8). The article’s conclusion echoes that of Dr. King, who focused famously on the ‘Triple Evils’ of poverty, racism and militarism, ie, symptoms rather than the underlying disease and one reason why Taylor Branch, the Pulitzer winning historian, could say of MLK that ‘all the issues that he raised toward the end of his life are as contemporary now as they were then’ (nytimes.com, 4 April 2018 nyti.ms/3t4gFpy). Fundamentally idealistic, reformists eschew revolution in favour of another spin on the misery-go-round. Consider, capitalism causes the rivalries that lead to war in the modern world. Conflicts between states and within states can result from competition over markets, sources of raw materials, energy supplies, trade routes, exploitable populations and areas of strategic importance. ‘Russia’s president knows exactly what he wants, and it’s not eastern Ukraine. His interests are all about oil and gas and supply routes. The rest is smoke and mirrors’ (thedailybeast.com, 1 March 2015, bit.ly/3M0FAmK).

With regard to climate change, all enterprises and states seek to minimise costs and releasing greenhouse gases into the environment is a way of reducing monetary costs. Human and environmental needs always come second, if at all, in the profit system. Capitalism’s primary imperative is always to produce more and accumulate capital or otherwise lurch into economic crisis. ‘…companies are continuing to invest vast sums in exploration and new fields, which the IEA said last year could not be brought to fruition if the world was to limit global heating to 1.5C’ (theguardian.com, 11 February, bit.ly/3sjsHfM). Nearly six million deaths, twelve times that of the 1980-1988 Iran-Iraq war, due to Covid-19 have been confirmed worldwide. Given that the knowledge and resources exist to reduce the number of epidemics and minimise the possibility of them becoming pandemics, the vast majority of these deaths can be considered premature. Capitalism has eradicated rinderpest and smallpox, yet the driving force of capitalism is the pursuit of profit not health. According to March’s Scientific American, ‘Global billionaire wealth grew by $4.4 trillion between 2020 and 2021, and at the same time more than 100 million people fell below the poverty line’ (bit.ly/3BTn7nk). And ‘The poor, no matter where they live, will suffer the greatest lasting toll’ – until, that is, we organise as a class for the conquest of the earth and all its resources.