Hunter-gatherers: Who are they? What do they tell us? 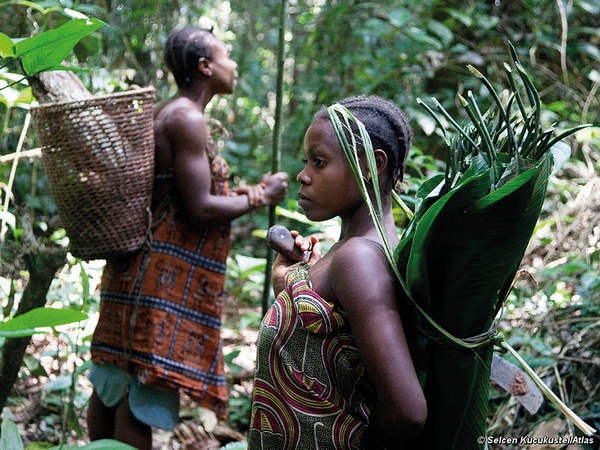 Since the time of Europe’s first extensive contact with indigenous peoples in the sixteenth century, the lives of hunter-gatherers have exercised a fascination over our mind. Who are these people? How do they live? What do they tell us about human society? Anthropologists dispute over how exactly we should define them. Beyond the fact that they live exclusively by hunting and gathering their societies are very various. Some, like the forest dwelling Mbuti of sub-Saharan Africa are nomadic, others, such as the South American Canela, live in settled communities. Several alternate between a nomadic and a settled lifestyle from season to season. Some hunter-gatherers are socially stratified, like the indigenous communities of the Pacific North-West of America who have a class of ‘nobles’ and a class of slaves. Others, like Australian aboriginal groups are dominated by elders who control young men by limiting their access to women. Others still, like the Nuer of the Sudan, have egalitarian relationships, but only between men. Hunter-gatherers have a multitude of different ways of organising themselves. The one thing we can say with any clarity is what they are not. They are not farmers. They are not tribal peoples who live partly by farming and have complicated clan structures. They are not urban dwellers and they do not live under the rule of complex states. They do not live like us.

Since the mid-1960s, however, a lot of attention has been focused on one particular type of hunter-gatherer, characterised by the anthropologist James Woodburn in a 1982 paper titled ‘Egalitarianism’ as ‘immediate return’ (tinyurl.com/yckndut5). ‘Immediate-return ’ societies are those which do not store or preserve food or other items, but consume what they produce more or less immediately. Only a small number of hunter-gatherer groups following this type of economy still survive. The most well-known examples are the Hadza in Tanzania, groups such as the Mbenjele, and Mbuti in the forests of sub-Saharan Africa, the Ju/’hoansi and !Kung and related groups in Namibia, the Hill Pandaram and Paliyan of southern India, and the Batek of Malaysia. What particularly intrigued Woodburn about all these groups is that, scattered as they were over three continents, they share the same type of social organisation. They are all intensely egalitarian. They live without private property. They have no chiefs, no elders, no shamans, no authority figures of any kind. Each individual is autonomous: no one can tell anyone else what to do. They are not territorial. And though their societies occasionally exhibit low levels of interpersonal violence, they do not make war on their neighbours. And contrary to the practice in patriarchal societies, women live close to their mothers, where they have support at least during their early years of childbirth and child rearing, while their male partners live with them.

Egalitarianism is often a poorly defined term. An egalitarian society is one in which people are equal, but equal in what way? It is a term that can mean many different things, and if you make people equal in one sense, you will often make them unequal in another. If you give a couple with one child and a couple with four children equal salaries, you make them unequal in their ability to provide for their dependents. Historically, the term ‘egalitarian’ has been used rather loosely by anthropologists, to describe societies that show egalitarian features in some aspects of their organisation, but not necessarily in others. The Nuer, mentioned above, were once described as egalitarian for maintaining equal relations among men, but distinctly unequal relations between men and women. It was a sign of the times. More recently, however, the term has only come to be used to describe societies that are egalitarian in more fundamental ways. When speaking of hunter-gatherers, it is used principally to mean two things, political equality and equality between the sexes. Political equality refers to equality of decision-making power. All immediate-return hunter-gatherers exhibit both these types of egalitarianism as well as a number of other features necessary to sustain them. These are principally an absence of authority figures, an equal access to goods and services and an absence of any kind of discrimination. All these societies, in other words, demonstrate a high degree of personal freedom.

Egalitarian, immediate-return hunter-gatherer societies are of particular interest to anthropologists, since it is believed that this was the form of organisation found among early humans. Even though evidence is growing that other forms of hunter-gatherer societies also existed (principally between 40,000 and 12,000 years ago), their numbers are still relatively small and the consensus remains that immediate-return societies predominated. Immediate-return hunter-gatherers are also of interest to socialists since they demonstrate a number of features about our human capacity to live and produce together socially as equals with a minimum of physical conflict.

We are surrounded with ideologies of capitalism which urge us to believe that humans are naturally competitive, aggressive and even warlike, and that capitalist society which promotes these qualities, is therefore well fitted to our nature. Given our prevailing mood of pessimism and the daily experience of living in a competitive capitalist society, it’s not surprising that this story appeals to many. But is it true? It seems not. The mere existence of immediate-return hunter-gatherers gives the lie to this story. If it were the case that we possessed some abstract ‘human nature’ that compelled us all to behave competitively, then immediate-return hunter-gatherers would never have existed, let alone survived sustainably for tens of thousands of years. And if the evidence holds and it turns out that this is the way we organised our societies during the 250,000 years in which we were establishing ourselves as a separate species, then it might surely be said to be the kind of society to which we are best fitted.

What do they tell us?

We must be careful, though. One of the things immediate-return hunter-gatherers can’t do is provide us with a blueprint of how to live in a socialist society. Even if we desired to live a hunter-gatherer lifestyle, it should be obvious that a pattern of life only sustained by the availability of large tracts of land could not support our current levels of population. To survive, we need some degree of large-scale mechanisation and social production requiring significant organisation and coordination. A future socialist society would look very different from an immediate-return hunter-gatherer one. As it happens, though, we now have a good understanding of the principles by which immediate-return hunter-gatherers maintain their egalitarianism and individual autonomy, and we can see how these are highly compatible with a society of common ownership and free association.

The first and most obvious of these principles is that individual freedom and equality is founded on the absence of private property relations. When everything is shared and every individual has free and direct access to the necessities of life, then no one has the power to stand between anyone else and the satisfaction of their needs. Common ownership, like hunter-gatherer sharing relationships, does not eliminate conflict but it severely reduces it down to the level of the individual or to small groups and prevents it becoming socially disruptive. Just as important for the maintenance of egalitarian relations and personal freedom in hunter-gatherer society is the ability of an individual or family to move away from any conflict situation or any individual who tries to coerce them. In capitalism our mobility as workers is limited. Moving away to another area means quitting a job, selling a house or giving up a tenancy, and finding another one. Within capitalism’s property system, that alone can be an insecure and worrying process, not to say one burdened with a lot of legal paperwork, financial rigmarole and practical hassle. Moving can also mean tearing oneself away from our support networks. In the non-private property environment of a socialist society, however, such restrictions are almost completely eliminated. Even the support we need for ourselves and our families is no longer dependent on particular people but is built into the fabric of a society based on free access and the satisfaction of individual need.

Immediate-return hunter-gatherers can also provide us with useful counter-evidence to many of the claims of capitalist economics. They show, for instance; that market relations are not universal and that human beings have no inescapable urge to ‘truck, barter and exchange’. They show that there is no obvious and necessary division between productive activity and social life, or that what a person receives from society must inevitably be tied to her individual work contribution. They show that acquisitiveness and selfishness are not essential features of human behaviour, that external pressures are not required to incentivise individuals to work, and that inequality and class divisions are not indispensable features of human society. They show too, that the inevitability of scarcity together with all that implies in society is a myth. Most systems of capitalist economics hold that scarcity arises because human beings have unlimited wants and limited means to satisfy them. In reality, however, we are producers as well as consumers of the goods we need to live. This gives us potentially a choice. We can work more and consume more, or we can work less and consume less.

Put in this simple, abstract way such decisions seem straightforward. Yet in a capitalist economy nothing is so simple. Our choices are blocked and distorted by the fact that in between the acts of production and consumption stands the profit motive which drives them both by its own relentless logic. It drives production by the continuous need for capitalists to maximise profit in a competitive environment; it drives consumption by the constant pressure on capitalists to market products, create wants and maximise sales. In the process, profit eliminates choice. Immediate-return hunter-gatherer societies face no such issues. They live at low levels of subsistence and their members require little to lead happy and fulfilling lives, yet even so they often choose to restrict their production in order to maximise their time spent on socialising and other activities. We have the same choice in a socialist society. What immediate-return hunter-gatherer societies demonstrate most clearly is that many of the assumptions made by capitalist economists are no more than a mirage cast by capitalism itself upon us and our relationships.

One Reply to “Hunter-gatherers: Who are they? What do they tell us?”