Proper Gander – The Shape Of Things To Comet 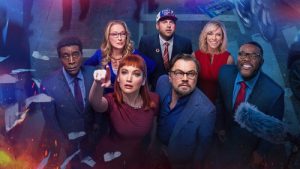 Movies about giant lumps of space-rock crashing into the planet come round every few decades, some having more impact than others. The earliest was the hit 1916 Danish film The End Of The World, made within recent memory of a fly-past by Halley’s Comet. 1979’s flop Meteor drew on contemporary Cold War tensions between the USA and the Soviet Union, and was inspired by Project Icarus, a plan to strike a potentially incoming asteroid with missiles. More recently, these films have come back into our orbit every twenty years or so, and in pairs, with blockbusters Armageddon and Deep Impact (both 1998) turning impending catastrophe into a glossy spectacle. The latest two have switched emphasis more to how people on the ground might respond to such an event. 2020’s Greenland followed a family’s attempts to escape from the impact, although the only doomsday-from-space movie anyone’s been talking about lately is Netflix’s ratings smash Don’t Look Up.

Producer/director/writer Adam McKay wanted to make a film about climate change, and with leftist journalist David Sirota, developed the idea that the lack of media coverage about it is like a comet heading to Earth which no-one cares about. The end result keeps the bluntness of this metaphor, while focusing not as much on apathy as on how capitalist society’s priorities detract from dealing with the problem. Don’t Look Up was devised before the pandemic, which has now given its message another topical spin.

Astronomers Kate Dibiasky and Randall Mindy (played by Jennifer Lawrence and Leonardo DiCaprio) discover a comet six months away from striking the planet in an ‘extinction-level event’. Teddy Oglethorpe (Rob Morgan), head of NASA’s Planetary Defense Coordination Office, arranges for them to present their findings to President Janie Orlean (Meryl Streep), who is dismissive and says that the government will ‘sit tight and assess’. Frustrated, Dibiasky and Mindy then take their apocalyptic discovery to a newspaper, which drops the story when it fails to generate enough internet traffic, and The Daily Rip, a vacuous talk show with an ethos of ‘keeping the bad news light’. On social media, Mindy trends as a ‘hot’ scientist, while Dibiasky is turned into a bitchy meme as a hysterical doom-monger. For the media, ratings and clicks are what’s important, rather than substance.

President Orlean only takes an interest in the looming end of the world when it becomes a convenient distraction from a sex scandal. She agrees a strategy to fire missiles at the comet, and because ‘Washington’s always gotta have a hero’, a gruff Colonel takes command of mission ‘American Savior’ to fly out and blast the comet away. In one of the movie’s cleverest scenes, the President explains how announcing this plan to the public will be pitched more like an advertising campaign for her government, filmed on a warship, ending with fireworks. The announcement hits its target, with the President’s approval rating reaching 99.1 percent, but the missiles don’t hit theirs. The launch is aborted when Peter Isherwell (Mark Rylance), creepy tech billionaire and prominent donor to Orlean’s party, finds out that the comet contains trillions of dollars’ worth of minerals. He comes up with a hasty and scientifically dodgy alternative plan to mine the comet, which gets support because of the jobs (ie, profits) it’s expected to create. Dibiasky and eventually Mindy realise that the problem can’t be resolved by working with the administration and corporations, and join and galvanise the ‘Just Look Up’ grassroots protest movement. This is countered by the government’s ‘Don’t Look Up’ campaign, complete with MAGA-style baseball caps. Isherwell’s plan fails, as does a probably sabotaged attempt by countries cut out of the mining deal, leaving the comet on its collision course.

Don’t Look Up isn’t at all subtle in its messages that protecting state power and the profits of big business are more important than saving the planet, and that the media trivialises and distracts from the issue. It’s refreshing to find such obvious anti-capitalist points made in a mainstream, widely watched movie, and it would be nice to think that its popularity is because of its subversive slant. The way the film satirises a government’s priorities is a bit blunted, though, as criticising a Trumpesque president is old hat these days. Its mistrust of the motives of tech companies is a blatant dig at the out-of-this-world ambitions of the likes of Elon Musk and, more pointedly, Jeff Bezos, Executive Chairman of Netflix’s rival Amazon Prime Video. But while the film exposes some of the structures which hamper us in dealing with major problems, it doesn’t offer any viable alternative, and didn’t intend to. The ‘Just Look Up’ movement isn’t in a position to make real change, as it’s only a protest group shouting at those in power. The general public are relegated to background details, depicted as media-fed sheep or angry rioters, without their motivations being considered. The film risks being misanthropic by disparaging everyone, apart from scientists who stick to their principles: NASA is the only institution which isn’t lampooned. So, alongside its criticisms of society, the positive lesson in Don’t Look Up is to ‘follow the science’ concerning climate change and Covid, as well as any comet collisions. But as the film demonstrates, science doesn’t exist in a vacuum, and it is shaped by the priorities of capitalist institutions like big business and the state, so ‘following the science’ always leads back round to what works within capitalism. The film doesn’t discuss this problem, though, and again it didn’t intend to. Unfortunately, Don’t Look Up’s critique of capitalism doesn’t go far enough, but still further than your average flick.