Consumerism and Literature – The Epoch That Ate the World

Through the medium of fiction, writers and poets have always shed a spotlight upon their own societies or speculated upon the possible directions in which said societies might travel. From William Morris’s uplifting News from Nowhere to Huxley’s and Orwell’s dark dystopian futures and more, fiction provides a platform for the unthinkable and unknowable. Science fiction writers have often been in the front of the field, exploring the unimaginable.

The Space Merchants, serialised in Galaxy Science Fiction magazine in 1952, is one of a number of sci-fi novels co-written by Frederick Pohl and Cyril M. Kornbluth. Here government and corporatism have become subsumed in the power of the advertising agencies. The sub-continent of India has been turned into a ‘single manufacturing complex, Indiastries.’ Mitchell Courtenay is a Fowler Schocken Associate who is now in charge of the account to ‘sell’ Venus to the public. There’s a rocket built already to go. The red in tooth and nail capitalism is being opposed by an underground organisation, the World Conservationist Association known as ‘the Consies’. Courtenay is an avid supporter of the existing system, not least because of the material benefits he derives from being a star copy advertising executive. Courtenay ’s thoughts on Gus, a Consie whom he’d had close contact with: ‘I hated the twisted minds who had done such a thing to a fine consumer like Gus. It is something like murder. He could have played his part in the world, buying and using and making work profits for his brothers all around the globe, ever increasing his wants and needs, ever increasing everybody’s work and profits in the circle of consumption, raising children to be consumers in turn’.

A few years after The Space Merchants was published we commented: ‘Consider the advertising profession. Is it not one of the most typical of capitalism’s great institutions, and also one of the most necessary processes between the raw material and the commodity we consume? If there was no advertising, how would we know that our very life depended on our using pink toothpaste? In fact, without advertising, how would we know what to eat, drink, wear, inject, smoke, etc.? We would be completely lost’ (Michael La Touche, Socialist Standard, May 1960).

How indeed would we know? Toothpaste (Gibbs SR) was the first advert broadcast on ITV (Independent Television) on 22 September, 1955. To channel the late Kirsty McColl, (Innocence), innocence has passed us all by a long, long time ago.

The Man who Ate the World, Frederick Pohl, Panther, 1979, has a fantastical plot twist because the poorer you are the more you’re forced to consume. This is Sonny: ‘The worst time was at night, when the baby sister was asleep and the parents were grimly eating and reading and dancing and drinking, until they were ready to drop. And of all bad nights, the night before his twelfth birthday was perhaps Sonny’s worst. He was old enough to know what a birthday party was like. It would be cake and candy, shows and games, it would be presents, presents, presents. It would be a terrible, endless day’.

This collection includes The Day the Icicle Works Closed, a science fiction version of straightforward capitalist greed: ‘The Icicle Works was the most profitable corporation in the Galaxy… Dickon had plenty (of shares). But he wanted more… And for the last twelve months he’s been picking up stock for a penny on the dollar while the rest of us starve.’ 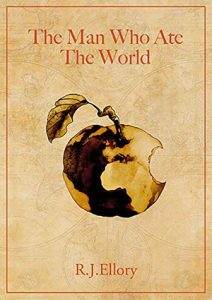 A 2020 novel by R. J. Ellory, is, like Pohl’s, also titled The Man who Ate the World. Roger Ellory says of the title, ‘(It) came about simply because it sounds really good in French (L’homme qui a mangé le monde)! Lots of alliteration. I guess it’s also figurative, in that the truth is more than capable of consuming all the evil of the world.’ The story is contemporary and there is no similarity to the Pohl story.

The protagonist here is named Joseph Conrad. JC is not a very naughty boy nor is he the Messiah although that question is occasionally posited. Joseph is a wage slave in a non-specified and nondescript job. He is made redundant. With his money assets totalling fourteen thousand pounds Joseph decides to discover who he is and what he’s supposed to be doing with his life. There are faint echoes of Chauncey Gardiner (Being There) and of Forest Gump in the character of Joseph Conrad but he is not autistic or an idiot savant. There are echoes too of the Queen Latifah 2006 film, Last Holiday. Here again, a working class shop assistant who is under the impression she only has a very short time to live, gathers her assets and goes off to a luxury hotel in Europe to enjoy her remaining time. Her kindness to everyone is contrasted to the attitude of the bourgeois there too. Unlike in real life, in films good deeds are mainly rewarded, though the film’s ending is a very ambiguous one.

The characters in Ellory’s tale are all named after poets and writers. Spoiler alert: an exception is Richard Dadd who, although an artist, also murdered his father. The ‘heavy’ discreetly employed by the state to carry out its dirty work is named Richard Dadd. Nigel Dennis, publisher and blackmailer in the 1957 film The Naked Truth, with Terry-Thomas, Peter Sellers and Dennis Price, would have been very jealous of Ellory’s Dadd who, as an information sponge, uses his control of data for the establishment’s nefarious purposes.

Throughout the book Conrad is to be found quoting words of wisdom from various literary figures. Joseph’s boss is named Menella Smedley (Menella Bute Smedley (1820–1877) was a novelist and poet, and relative of Lewis Carroll, who wrote some minor novels and books of poems). The characters who meet in a brief sojourn in Ireland repay investigation by the reader into their histories and outputs. Joseph Conrad accidentally becomes the fountainhead of a social movement, Random Acts of Kindness. Various arms of the Establishment are less than enraptured to see the sheeple beginning to act independently.

‘This Kindness business was all very well and good, but it was uncontrolled and seemingly uncontrollable. It was a wildfire, and firebreaks were needed. Perhaps those who sought to control public opinion were anxious about repercussion. The suggestion that individual citizens could make a difference was dangerous, but nowhere near as dangerous as collaborative effort to effect social change. The public did not understand. They never had and never would. They were little more than children, if truth be known. Politicians and bankers and media conglomerates needed to filter information, decide interest rates, enact laws and dictate codes of conduct, and if they did not then the society would tumble into the abyss of anarchy.’

‘New ideas were fine, as long they did not disestablish and unsettle the old and proven ideas that had served to maintain the order of things for more generations than anyone cared to remember. There was a way to do things, and no one had a right to change that way but those who were set to make the most money from it. Everything was dependent upon confidence – confidence in the government, confidence in authority, confidence in the banks and the police and everything else the establishment provided for the good of the people – and that was something that can never be threatened nor undermined.’

Typing ‘Kindness’ and ‘Covid’ into Google brings up ninety seven million plus results. The only reason that the working class have to be kind toward capitalism is that it long ago laid the foundations for the transition to a truly emancipated society.

Pressure to persuade the working class that capitalism, not socialism, is the best in this ‘best of all possible worlds’ is continuous. But, the choice is still ours. When are we going to become dangerous and collaboratively effect real social change?