Book Reviews – Always Red / Burning the Books: a History of Knowledge Under Attack / Sylvia Pankhurst: A Suffragette in America 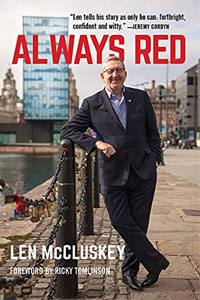 McCluskey has always come across as the ultimate trade union bruiser and then, in later years, a close ally of Jeremy Corbyn. Originally a ‘planman’ on the Liverpool docks (drawing up plans of where cargoes from various ports would be held on ships), he rose through the ranks of the Transport and General Workers’ Union before playing a key role in the creation of Britain’s most powerful union, Unite – formed in 2007 from a merger of the T & G and Amicus. From 2010 until recently, he became its General Secretary.

The ‘red’ in the title refers not only to McCluskey’s politics – he was an early supporter of Militant, though says he was never a member – but also to his love of Liverpool FC, with which he appears to have travelled all over Europe. He also appears to have seen red many times in the more metaphorical sense during his union career and the book is full of score-settling. Former Labour Deputy Leader Tom Watson – who was McCluskey’s old flat mate – comes out of it particularly badly. And there is clearly no love lost with Keir Starmer either, who he accuses of duplicity.

One of the recurring issues in the book though is McCluskey’s belief that the working class are ready to rally behind a radical left-wing programme of nationalisation and state planning if it wasn’t for the right-wing of the Labour Party selling them out. This, of course, is the old Militant line, parroted today by their successors SPEW (he also still uses some of their terminology, banging on not just about the Labour Right but the ‘ultra-left’ too).

This perspective leads him to often make a highly selective and one-sided analysis of events, the best example being the Labour performance under his friend Corbyn in the 2017 and 2019 General Elections. 2017 is portrayed as a great victory in all but name as Labour increased its vote with a radical programme of reforms by more than in any other election since 1945. However, 2019 is portrayed as the Brexit election and that Labour’s downfall was simply a reflection of this and its pro-Remain stance.

But this won’t do. Not just because Brexit wasn’t the only factor that led to their disastrous showing in 2019 – the public perception of Jeremy Corbyn and Labour’s unrealistic long ‘shopping list’ of leftist demands were almost as significant. But it’s also because their relative success in 2017 (even though they didn’t actually win of course) wasn’t principally due to the fact they presented the British working class with the radical stuff they had long been waiting for. After all, they’d actually done the same in 1983 and had come a big cropper then, as they later did in 2019 with an even bigger radical promise.

The main reason for Labour’s relatively good showing in 2017 was because that election was also dominated by Brexit but that time they more successfully pitched themselves as a party that could be supported by Remainers and even some ‘soft’ Brexiters worried by a no-deal outcome. It was why Labour managed to win strongly pro-Remain Kensington and Canterbury for the first time ever, yet against the national swing, could also contrive to lose the likes of hard-Brexit Mansfield and Stoke-on-Trent South for the first time in living memory. The correlation between increases in the Tory vote in strong Brexit areas and the increase in the Labour vote in strong Remain areas was statistically significant and the biggest factor at play, but McCluskey just ignores this. By 2019 the ground had shifted and Labour was by then simply left with an unpopular leader, an incoherent campaign and an unconvincing set of leftist reforms.

But it was ever the way with the left – always wanting to convince themselves the precise cocktail of radical reforms of capitalism purveyed by one or other of their factions would one day triumph, when most of the evidence is to the contrary (and not just in the UK either).

The best chapter is actually the last one, on ‘fighting back’ trade unionism as he calls it. Here McCluskey outlines how Unite has developed the tactic of ‘leverage’ and discusses how it works. A good example was when ‘passenger transport company Go Ahead sacked a steward working on the buses in Manchester, we discovered its growth plan was to move into the Norwegian rail market by winning a contract worth £3.8 billion. We dispatched a team to speak to Norwegian politicians and the press, armed with a dossier detailing how this company dealt with rail contracts in the UK. The company was forced to weigh the benefit of getting rid of the steward against the threat to a multi-billion pound contract. Soon enough, the steward was back at work’ (p.292).

There are a variety of examples of Unite using leverage in successful ways to defend its members and their pay and conditions. This is what good unions are for (despite their imperfections) and this chapter is arguably worth more than the rest of the book put together. Indeed, McCluskey can take some genuine pride in the role he has played in developing this – and certainly far more than in what appears to be his enduring adherence to the Trotskyist tactics and programmes of the 70s and 80s. 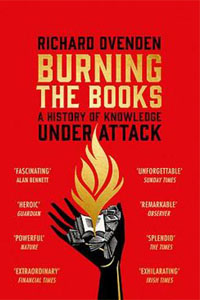 The Power of Words

Burning the Books: a History of Knowledge Under Attack. By Richard Ovenden. John Murray £10.99.

Probably the best-known case of book-burning was on 10 May 1933, in Berlin and other German cities. The Nazi authorities consigned many books, by Marx and Freud among others, to the flames. This was, however, only the first step in the Nazi attack on learning and scholarship, which led to over 100 million books being destroyed. Jewish culture was a specific target, of course.

This is one of many examples discussed in Richard Ovenden’s wide-ranging study, which also deals with efforts to rescue or replace destroyed works. For instance, the YIVO archives in Vilnius, and later in New York, were able to preserve many Jewish books and documents. In many other instances, too, people have risked their lives to rescue books and other documents.

Loss has sometimes been a matter just of neglect, and the removal (theft) of texts has on occasion been an unintended consequence of war. The German Peasant War of 1525 was a rare example of documents being destroyed by those who lacked power: feudal charters and tax rolls that kept peasants in servitude. But in most cases the destruction of works has been a deliberate policy by power-holders, as a means of controlling the past and hence the present and future. The sixteenth-century Reformation, for instance, ‘was in many ways one of the worst periods in the history of knowledge’. In England, tens of thousands of books were burned or broken up, especially in monasteries and other religious communities, and an Act of 1549 provided state sponsorship for this. It was all part of Henry VIII’s declaration of independence from the rule of Rome. As another example, the destruction of Bosnian archives by Serb forces in the 1990s was in particular aimed at removing records of the presence of Muslims.

Oppressive regimes tend to keep massive amounts of information on their ‘subjects’. In South Africa, officials in the apartheid regime destroyed large numbers of documents, making it difficult for subsequent inquiries into the oppressive system. Around the time Malaysia became independent in 1957, British colonial officials destroyed countless archives and documents, in order to conceal their racist and prejudiced behaviour. In East Germany, many files held by the Stasi were disposed of, though many citizens were still able later to view the files and see what information the state held on them. In 2019, the Turkish government began to destroy books associated with one of its opponents.

The web has resulted in a major change to how knowledge is recorded and preserved, but that does not mean written texts are redundant. Websites often disappear or change their address, and web archiving is a challenging task. Ovenden’s book shows clearly the importance of recording information, how the powerful have often tried to manipulate this in their own interests, and how some people have managed to resist this. 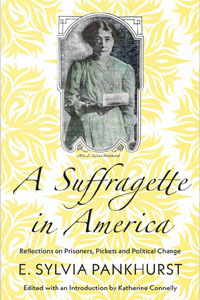 Machines and Hell in the US

Sylvia Pankhurst visited the US in 1911 and 1912, each trip lasting about three months; the first included a few days in Canada. She wrote an account of her visits, but it was not finished or published. Here Katherine Connelly provides a timeline, an extensive general introduction and short introductions to each chapter of the original text; she also supplied the title.

The visits were undertaken partly for financial reasons, but also to spread suffrage ideas in the US, where in only five states did any women have the right to vote by 1912. Pankhurst spoke to many suffrage organisations, but her write-up is more concerned with the social situation: the lives of working women, prison conditions, racism, and so on. In New York she observed that bad pay and conditions, such as a seventy-hour week, were not just applicable to immigrants but to all women workers. In a laundry the workers ‘moved as though they were part of the machinery’. A factory in Nashville ‘might well serve as a representation of Hell’, such was the noise and dust. Prison conditions were appalling, with a ‘dehumanising atmosphere’.

The visit to Nashville was a deliberate choice to study the situation in the American South and Pankhurst specifically chose to speak to a black audience. This was because many suffrage organisations marginalised or excluded black women activists, and some campaigners even argued that giving white women the vote would restrict the influence of black voters.

In 1912 Pankhurst also spent several days in Milwaukee, where a supposedly Socialist local council had been elected. The mayor, Emil Seidel, was the vice-presidential candidate when Eugene Debs ran for president on the Socialist Party of America ticket that year. She acknowledged that the council had achieved relatively little and that women’s needs had been overlooked. Such a ‘top-down’ approach to policy was not appropriate, and this may well have influenced her views back in the UK, when she rejected the authoritarian attitudes of her mother Emmeline and sister Christabel, and set up the East London Federation of Suffragettes, which linked the suffrage struggle to trade union activities.

For socialists the most interesting part of Sylvia Pankhurst’s career came a decade later, when she rejected Bolshevism and stood for ‘the total abolition of money, buying and selling, and the wages system’ (see our pamphlet Sylvia Pankhurst and Socialism). This volume, however, provides a useful and informative look at her earlier views and the political situation in the US.

2 Replies to “Book Reviews – Always Red / Burning the Books: a History of Knowledge Under Attack / Sylvia Pankhurst: A Suffragette in America”