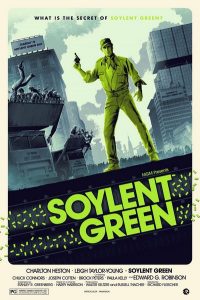 ‘There’s a debate going on among the disaffected/terrified over which dystopian novel we’re now living in. Some point to social media addiction and designer drugs to suggest Brave New World. Others see mass surveillance and pandemic lockdowns. Each of these opinions seems valid, which is confusing… Turns out we’re not in a single dystopian novel. We’re in all of them simultaneously’ (dollarcollapse.com, 17 December).

George Orwell’s Animal Farm and 1984 also form part of the Venn diagram of our overlapping dystopian oppression along with A Handmaid’s Tale, Brazil, Clockwork Orange, Gattaca, Logan’s Run, as well as Soylent Green, Farenheit 451, Lord of the Flies, and The Matrix.

‘You’re bought as soon as they pay you a salary.’

The film Soylent Green, which is loosely based on Harry Harrison’s novel Make Room! Make Room!, dates from 1973 and depicts a future (2022!) in which food shortages and overpopulation feature prominently – New York City alone has forty million inhabitants, which is over four times the current total – and there are many who opine that such ‘problems’ form part of reality today. They are wrong.

‘In 1798, Thomas Malthus argued that human populations tend to increase more rapidly than their food supplies, which would lead to mass starvation. More than 150 years later, Paul Ehrlich predicted that “hundreds of millions would starve to death” in the 1970s and ’80s due to overpopulation. What both men missed is mankind’s propensity for problem solving and innovation, which, thanks to capitalism and globalization, has seen rates of food insecurity decrease, while the world’s population has skyrocketed’ (nationalpost.com, December 23).

Yet under capitalism, where the profit motive reigns supreme, food is destroyed and famines persist in a world of potential abundance.

‘Do you ever read any of the books you burn?’

Socialists do not call for The National Post to be censored because it promotes the dystopia known as free market capitalism. Indeed, we oppose censorship and, of course, its extreme expression in the form of book burning.

‘It had started two meetings prior when two parents addressed the board during Public Comments to complain about two books on the high school’s shelves, Call Me By Your Name by André Aciman and 33 Snowfish by Adam Rapp. In response, the board voted 6-0 to remove all “sexually explicit” books from the high school shelves, though it never defined what constituted “sexually explicit”. Going further, two members, Mr. Rabih Abuismail and Mr. Kirk Twigg, suggested that they might burn any books they found to be inappropriate’ (bookandfilmglobe.com, 19 December).

Ray Bradbury’s classic Fahrenheit 451 has itself been censored, but not, like copies of Capital and the Communist Manifesto, burned in public. His novel concerns a future American society where books are outlawed and ’firemen’ burn any that are found. Arguably, perhaps the most horrifying depiction of book burning appears in Umberto Eco’s Name of the Rose. Guy Montag, a fireman in Bradbury’s Farenheit 451, who becomes disillusioned with his role of censoring literature and destroying knowledge (he eventually quits his job and commits himself to the preservation of books) might just agree.

William Golding, who was awarded the Nobel Prize in Literature in 1983, is (in)famous for his debut novel Lord of the Flies which concerns a group of schoolboys who are stranded on an uninhabited coral island and their struggle to survive. The boys’ differing personalities soon determine their function within the group: leaders, followers, outcasts. Soon they are organised hierarchically and, shortly after, divided into tribes. The adventure is provided by the boys’ growing fear of The Beast, an apparently natural danger which threatens to destroy them. Life adapts to a chain of ordered survivalism in defence against the Beast. There are those who think The Beast an invention and others who seek to hunt and kill it. But the reader, guided by Golding, comes soon to see The Beast is neither an infantile invention of self-torment nor a conquerable enemy from without. Few novels have so eloquently served the cause of capitalist ideology which contends that humans are inherently aggressive, gullible, self-serving, easily led and un-cooperative. Growing evidence from modern anthropology and archaeology tells us otherwise. Graeber & Wengrow’s The Dawn of Everything ‘reins in history’s rules and replaces them with a radical, uncompromising play, not such that we are overwhelmed with an infinity of nihilistic political choices, but so we may finally articulate and follow the values that lead to our better possible world’ (theqiuetus.com, December 18). 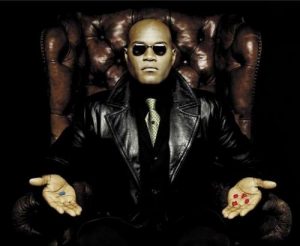 We have a choice, not unlike that of Morpheus in The Matrix 4.

‘As Bugs offers Morpheus a blue pill or a red pill, she remembers her own experience with initially discovering the truth about the Matrix and receiving the same offer to pursue the truth or return to her false reality…For characters such as Bugs and Morpheus, once they have realized the deeper truth about existence they could never be satisfied going back to living a lie. In a franchise about enlightenment and self-discovery, this quote speaks to the powerful nature of truth’ (screenrant.com, 26 December).

We need to take the red pill of socialist understanding. ‘All that is solid melts into air, all that is holy is profaned, and man is at last compelled to face with sober senses, his real conditions of life, and his relations with his kind… He becomes an appendage of the machine, and it is only the most simple, most monotonous, and most easily acquired knack, that is required of him. Hence, the cost of production of a workman is restricted, almost entirely, to the means of subsistence that he requires for his maintenance, and for the propagation of his race’ (The Communist Manifesto, 1848).