Unidentified Aerial Phenomena (UAP) – What if? 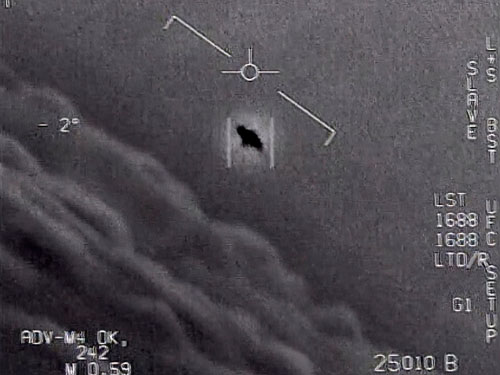 So it’s official – unidentified flying objects are ‘real’ phenomena. So said the US Department of Defense on 27 April 2020. Upon this date they released three videos containing footage of, and reaction to, unidentified aerial phenomena. These videos had been seen some years before on a UFO enthusiast’s website but had been dismissed as hoaxes. Subsequently an investigation by the New York Times revealed them as genuine footage of a real event. As a result of this the Pentagon reluctantly admitted this was true and that they had been studying such phenomena for some years in an attempt to discover if they represented a ‘threat to national security’. Let’s take a look at this evidence with a less paranoid eye to ascertain what possible effect this might have on how we understand nature and technology.

In 2004 the aircraft carriers USS Nimitz and USS Princeton off the California coast, and then in 2014 the USS Theodore Roosevelt off the east coast of the USA, reported similar sightings by radar tracking and then infrared cameras aboard strike force aircraft. The pilots reported swarms of 50 ft. long white capsules (they dubbed them ‘Tic Tacs’) performing impossible aerial manoeuvres at high speed with no evidence of wings, rocket or jet exhausts or propellers. They could seemingly stop and accelerate instantaneously and appeared equally adept in the ocean, sky and space. The objects reacted to the aircraft and appeared to play with them as dolphins sometimes do with human swimmers. The radar and infrared footage seems to rule out any element of mass hallucination or visual illusion or any form of known natural phenomena. The observed ability of these objects to defy the known laws of nature would also seem to preclude the possibility that they were the result of any human technology. Of the many attempts to explain this exceptionally enigmatic phenomenon let’s choose the extraterrestrial origin hypothesis and indulge in a thought experiment to investigate the possible implications for the world of politics.

Many of us have enjoyed films and novels that feature an ‘encounter’ with alien creatures from another world. Depending on when they were made they reflect the different levels of fear and hope represented by such a discovery within certain cultures at certain times. During the Cold War these stories were essentially born of the paranoia around nuclear weapons and any superior technology was seen as a threat. But what is the response of global capitalist culture in 2021? The international bourgeoisie will always be suspicious of anything or anyone that they cannot corrupt or intimidate but most people seem either indifferent or profoundly intrigued by the possibility of an alien encounter. One particularly important possibility represented by the performance of these objects is that the immense distances between stars and their planetary systems may not preclude such visits as scientists have long maintained. Our laws of nature are certainly incomplete and interstellar travel might be a real possibility for advanced alien cultures. That the owners of these Tic Tacs seem indifferent to humanity does not imply that other elements of our planet might not be of more interest to them. If they were to choose to interact with us what might be the result?

It seems reasonable, from a socialist point of view, to believe that if any civilisation has achieved the level of technological sophistication to make interstellar travel possible they would have survived and overcome private property relations and the tribalism and violence associated with it. Therefore it’s unlikely that any alien visitors would be a threat to us or any other species on Earth. Likewise, their technological status would greatly limit any threat from us. What would be the nature of any communication? Perhaps, just as we value the art and culture of our own past, our visitors would be interested in our cultural activities down the centuries. Or perhaps they would be interested in our biological evolution compared with their own – the topics of conversation would be fascinating and endless. Presumably they would be wise enough to observe the ‘prime directive’ and not share any of the secrets of their technology. Of course, should it ever occur our history would change forever once the encounter had happened. Some believe it already has in the distant past but there seems no evidence for this – something our visitors might like to deny or confirm. Perhaps they’re waiting for our species to overcome its atavistic adolescence and establish socialism before they make contact. For socialists it would be a great chance to confirm the process of cultural evolution (materialist conception of history) as universal. It would also be immensely reassuring that intelligent life can evolve beyond the chaos and despair that we see on our own planet.

On close inspection of the footage itself it has to be said that it’s rather underwhelming. The fuzzy objects in themselves are too enigmatic to provide any proof of their nature or origin. It is rather the pilot’s reaction and narration that makes the incident so compelling. These are trained members of the military who are not known for feverish hallucinations. Something is going on. Will it prove to be the beginning of something historically significant or continue to be merely a mysterious but unimportant part of every pilot and astronaut’s working life? Now that the subject has outgrown its pulp fiction origins and has become part of scientific research we can now perhaps all look at the skies and report what we see without the associated ridicule of the past. It may well be that this fear of derision has led to an under-reporting previously and that such sightings are relatively commonplace. Even socialists can now take time out from the relentless class struggle and look up at the sky and ponder the possibility of other intelligent life forms on other worlds, together with ourselves, as aspects of the incarnation of the universe becoming conscious of itself.

One Reply to “Unidentified Aerial Phenomena (UAP) – What if?”