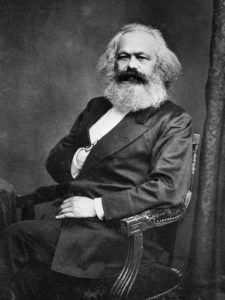 Marx never completed a planned book on crisis, but the three volumes of Capital can be read as a theory of crisis that reveals the fundamental contradictions that explode (and are temporarily resolved) in a crisis.

Economic crisis is a troublesome phenomenon for the defenders of capitalism. The problem is not simply the curtailment of economic activities and the bankruptcies and unemployment that ensue. A far bigger problem is ideological because the undeniable reality of crisis exposes that capitalism is not, as economists insist, the ideal engine for satisfying human needs through the creation of wealth. Crisis exposes the limits imposed on wealth creation by production for profit; limits, incidentally, that are always present in capitalism, whether in boom times or bust.

Crisis is the real negation of the argument that capitalism is the ideal means of developing the productive forces of society, an argument that dates back to the emergence of political economy in the 18th century. Adam Smith begins his great work The Wealth of Nations by praising capitalism as the most efficient way to raise the productive power of labour. To be more precise, he uses the term the ‘division of labour,’ not capitalism, but what he has in mind is independent producers creating commodities for the market, a state of affairs that he says gradually emerged from a human propensity to ‘truck, barter and exchange one thing for another’.

David Ricardo, that other great classical economist, shared Smith’s faith in the ability of capitalism to freely develop productive power, and he was fortunate, in a sense, to die at the early age of 51, in 1823, because had he lived just two years longer, Ricardo would have confronted the crisis of 1825, considered the first economic crisis to clearly arise from the workings of capitalism itself, rather than some external cause. The periodic, general crises of the sort that followed in the 19th century would have put Ricardo’s faith in capitalism to a severe test.

The reality of crisis did indeed test the economists who came after Ricardo, forcing them to choose between continuing to extol the virtues of capitalism or seriously considering the implications of periodic crises. Since the livelihoods of most depended on not understanding those implications, this marked the emergence of what Marx called the ‘vulgar economists’, those ‘hired prize fighters’ who abandoned genuine scientific research to instead act as apologists for capitalism. Each time a crisis occurs, economists point to some external or contingent factor as the cause for the temporary disruption of the supposedly splendid ability of capitalism to self-regulate on the basis of supply and demand.

Marx, in contrast, explains economic crises that regularly take place as a normal manifestation of the capitalistic accumulation process. He points to the inherent tendency of capitalism toward crisis, which underscores the limitations of this mode of production. An understanding of the significance of crisis is thus at the core of Marx’s investigation of capitalism.

Marx had in fact intended to write an entire book on crisis. We know this from the plans he sketched for a ‘critique of political economy’ in the 1850s. According to his 1857 version of the plan, the book on ‘the world market and crises’ was to be the sixth and final book of the critique, following the other books on capital, landed property, wage labour, the state, and foreign trade.

Marx never completed (or even began) that book however, so he has not left us a coherent, systematic theory of crisis. Nevertheless, we can consider the three volumes of Marx’s great work Capital as broadly constituting a theory of crisis.

Of course, unravelling all the contradictions that explode in a crisis is easier said than done. So immediately we face the question of what step to take first in reading Capital as crisis theory. Fortunately, Marx has left us a passage in Theories of Surplus Value that outlines a basic approach to the investigation of crisis. (This passage can be found in volume 32 of the collected works of Marx and Engels, starting from around page 140.)

In the passage, Marx indicates that the first step toward understanding crisis is a recognition of what he calls the abstract form of crisis or the ‘general, abstract possibility of crisis’ that already exists under simple commodity circulation. The basis for the possibility of crisis, at the most abstract level, he explains, is the fact that there can be a divergence between sale and purchase.

This is something that Marx also points out in the first volume of Capital, where he notes that sale and purchase can diverge since ‘no one directly needs to purchase because he has just sold’. In other words, a person who obtains money by means of selling a commodity is under no obligation to immediately use that money to purchase some other commodity.

By indicating this fact, Marx was refuting what he called the ‘foolish dogma’ of the French economist Jean Baptiste Say, who had insisted that sales and purchases (and hence supply and demand) are in equilibrium ‘because every sale is a purchase, and every purchase a sale’. This was the popular argument used to deny the possibility of overproduction, which Ricardo also adhered to.

It is true, of course, that in the case of barter a direct identity exists between the exchange of one’s own product and the acquisition of the product of someone else. No one can be a seller without being a buyer or a buyer without being a seller. Marx points out how the introduction of money splits that unity of direct exchange into the two antithetical segments of sale and purchase, allowing circulation to ‘burst through all the temporal, spatial, and personal barriers imposed by the direct exchange of products.’

But Marx is careful to note that the divergence of sale and purchase cannot be viewed as the direct cause of crisis. Rather it merely denotes the ‘formal possibility of crisis,’ or what he calls ‘the most abstract form of crisis, without content, without a compelling motivating factor’.

Delay between sale and purchase

In the same methodological passage in Theories of Surplus Value, Marx presents a ‘second form’ of crisis related to the divergence of sale and purchase. This is the possibility of crisis arising from money’s function as a means of payment. This function of money, which is explained in Chapter 3 of Capital, concerns transactions in which a seller hands over a commodity to a buyer while providing a ‘promise to pay money’ at a later date, so that the seller becomes a creditor and the buyer a debtor. In other words, the function of money as a means of payment is at the basis of credit. Money as a means of payment allows for sale and purchase to diverge even further, as if the rope connecting them were replaced by a bungee cord.

The time gap between the handing over of a commodity and the payment of money for it raises the possibility for more problems to arise. Marx notes that if ‘in the interval between the handing over and the payment the value has changed’ so that the commodity is not worth as much at the time of its sale as it was worth at the moment when money was acting as a measure of value, then ‘the obligation cannot be met from the proceeds of the sale of the commodity, and therefore the whole series of transactions which retrogressively depend on this one transaction, cannot be settled.’ In other words, the failure to make good on one promise to pay can set off a chain reaction, leading to other failures to settle debts.

This second form of crisis, based on money as a means of payment, is more concrete than the first, but still quite abstract, Marx emphasises. Neither the first nor the second form of crisis can be considered a direct cause of crisis. Rather, they are what Marx calls the ‘most generalised expression’ of crisis or its abstract possibility. He explains that the abstract form of crisis ‘only implies that the framework for a crisis exists,’ but does not contain the factors that transform the possibility of crisis into an actual crisis; a whole series of other conditions is required in order for the possibility of crisis to develop into actuality and those conditions do not yet even exist, he says, from the standpoint of the simple circulation of commodities.

Interruptions to circulation of capital

We have seen, then, that even at the level of commodity circulation there is the potential of a disruption or crisis. Conversely, in a moneyless society, where production is directly for use (with no market mediation), this possibility of crisis would not exist.

In order to better understand the relation between capitalism and crisis we have to move beyond this abstract understanding of the potential for crisis. So here we face the question of how to take a step toward understanding crisis more concretely.

We can get some hints from the same passage in Theories of Surplus Value. Marx points out there that abstract forms of crisis receive what he calls a content or a basis on which to manifest themselves in the circulation/reproduction process of capital. This means that we need to move on to Volume 2 of Capital, where Marx examines that process.

The significance of this added complexity as far as crisis theory is concerned is that there are more possibilities for sale and purchase to diverge under the circulation of capital as compared to simple commodity circulation.

In Volume 2 of Capital we can find many examples of how the abstract forms of crisis could acquire what Marx calls a ‘content or basis on which to manifest themselves.’ For instance, in the course of the circulation (and reproduction) of capital, the value of the elements of production (or labour power and the means of production) can fluctuate, making it difficult to carry out production at the previous scale. Another way in which the possibility of crisis acquires a more specific content is that capitalists must build up funds for the sake of accumulation and the replacement of constant capital. So they have to hoard money, which means they make sales without subsequent purchases – an example of sale diverging from purchase. Yet another example concerns large-scale projects, such as the building of a highway or railroad, which for many years require purchases without sales (or demand without supply).

We can see, then, that the analysis of the circulation of capital in Volume 2 points to some of the potential problems that can arise, revealing how the abstract forms of crisis acquire a more specific content. So we have taken some steps towards a more concrete understanding of crisis under capitalism, but it is important to note that we are still only dealing with the possibility of crisis. What has not been made clear yet is what factors transform that possibility into actuality. That is a step that brings us to Volume 3 of Capital (as will be discussed in Part 2 of this article).

The ideas on Marx’s theory of crisis presented here are based mainly on the interpretation by the Japanese Marxist Samezo Kuruma. My translation of Kuruma’s writings on crisis theory will be published in 2022 in Brill’s “Historical Materialism” series.

One Reply to “Reading Capital as Crisis Theory: Part 1”