Death (in prison) of a guerrilla

In September the ex-Maoist guerrilla leader Abimael Guzman died in a prison in Peru where he had been for nearly thirty years. He has been portrayed by the Peruvian and world press as one of the most criminal and brutal ‘Marxist’ leaders in the world, blamed for the death of more than 80,000 people and the destruction of private and government property 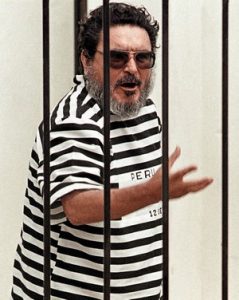 He was the founder of ‘Gonzalo Thought’ (after ‘Mao Zedong Thought’) and he created his own cult of personality, seeing himself as one of the ‘four swords’ of Marxism, after Marx, Lenin and Mao. He travelled to China in 1966 and 1967 during the Cultural Revolution and was part of a split from the Communist Party of Peru (Red Flag). Mao’s Little Red Book became his Bible. When he returned to Peru, he formed a guerrilla group called Shining Path with some of his professors and young students who came from peasant families,

The name Shining Path (Sendero Luminoso) was taken from José Carlos Mariategui, a Peruvian Marxist-Leninist who had founded Peru’s first Communist Party in 1928 and who advocated a peasant/indigenous people’s ‘socialism’. His maxim was: ‘El Marxismo-Leninismo abrirá el sendero luminoso hacia la revolución’ (‘Marxism-Leninism will open the shining path to revolution’). Many political movements were inspired by his writings including the Tupamaros in Uruguay and Evo Morales’ indigenous peoples’ movement in Bolivia. Three ex-leaders of these guerrilla movements later became presidents in Latin Americas and allies of the ruling class and the corporations.

Was Guzman really a communist? Was he a Marxist? Were Mao and Lenin genuine Marxists and socialists? Are Leninism and Maoism valid socialist/communist currents? Can the crimes that were committed by Guzman and Shining Path be blamed on Marxism and socialism?

The Socialist Party and the World Socialist Movement have said for decades that Leninism, Stalinism and Maoism have never been Marxist or socialist conceptions; that, instead, they were representative of an economical current described by Engels as State Capitalism; that the concept of a violent uprising was a tactic created by Lenin and the Bolsheviks to overthrow the government of Russia, an idea borrowed from the French Blanquists. It was not a Marxist conception. Shining Path’s first action was to attack a polling station and burn it down, in defiance of Marx’s insistence on the political education of the working class, the revolutionary use of the ballot, and universal suffrage among the working class. 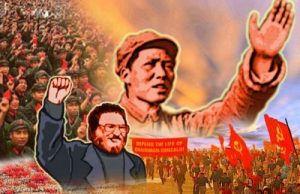 In Latin America Maoism was a complete failure from the first, having been adopted by several organisations that had abandoned Castroism. It sacrificed the lives of many young people who became members of the urban guerrillas and infiltrated themselves into workers’ unions, or went to the mountains or jungles of several countries in Latin America and were assassinated by the police or the armed forces, along with many peasants and members of the workers’ unions, university teachers, and young professionals.

Maoism’s failure in Latin America is a clear indication that a minority group of individuals will not liberate the working class and humanity. It suggests that Marx was correct when he wrote that only the working class can liberate itself. Maoism was a tactic, earlier criticised by Engels, of a conscious minority acting in the name of an unconscious majority. But socialism cannot be established without a class-conscious working class

Mao Zedong Thought attracted many young people in different countries in Latin America including the Caribbean islands as an ideological replacement for Castroism, but in essence it was the same adventurist programme advocated by Regis Debray who had been in Bolivia with Che Guevara. The main attraction was the concept of ‘anti-revisionism’ started by China and Albania against the ‘Khruschevites’. It claimed to be a restoration of true socialism and true Marxism, but it was just a variety of Leninism and Stalinism. Maoism was Chinese nationalism, just as Castroism was Latin American nationalism.

Latin American Maoism was basically a nationalist/patriotic movement, and all the so-called Communist parties that were created were nationalist parties of the countries where they were formed. None of them had a socialist programme; their programme was for reforms, statism and the nationalisation of natural resources.

It was mainly a movement among young people and university students. It never had any support among the industrial working class. Although many Marxist-Leninist parties sent their best cadres to work with the peasants, it never became a peasants’ movement; it was capitalist governments that provided the peasants with what they wanted – land reform, agricultural equipment and supplies. They confronted a force which was stronger than them, the forces of the capitalist state, and suffered the consequences.

When China openly opted for state-run capitalism and collaboration with Western powers and Western corporations, all these organisations collapsed and disbanded themselves. Some of their leaders were killed or deported; others later became government ministers. The USA wanted them to leave and provided visas for them to emigrate, but they were no threat to capital and to capitalist society; they were anti-imperialists, but they were not anti-capitalists.

The new government of Peru refused to bury Abimael Guzman’s body, citing so-called national security. So his body was cremated and the ashes scattered at a secret location. Maoism and Shining Path are no longer popular within any section of Peruvian society nor a threat to security. At first they had some support within the peasant class, but then the peasants were caught in the cross-fire between the Maoist guerrilla fighters and the government’s armed forces and many were killed. Maoism is a dead movement in Peru today. Most of the members of Guzman’s group became part of some gang or drug trafficking.

Many of the deaths blamed on Shining Path and Guzman were not committed by them. The police, the paramilitary and the armed forces should be blamed for most of the killings, like most of the killing committed in Colombia in the fight with the Maoist/Castroist guerrillas known as the FARC – another group which is not socialist or Marxist, as the media alleged. Being connected to and armed by Cuba does not make a group socialist. Nor were the Tupamaros in Uruguay a socialist or Marxist movement (one of their ex-leaders later became president) but were more like a Robin Hood movement, taking money from the rich to give to the poor.

Maoism in Latin America showed its terrorist and anti-working-class nature, and was a total negation of the revolutionary nature of Marxism and socialism. It was only the capitalist press and the anti-communists who labelled Guzman and those like him ‘Marxist’, just as they did with FARC.

Maoism could not have been applied in developed capitalist countries like the USA, Britain, or Germany. It was basically a theory for a peasants’ movement, similar to the Russian anti-Tsarist Narodniks who, similarly, had no support among the peasants and ended up using terrorist tactics. It could only be applied in Third World countries, but even so was a complete failure in all the economically backward countries where it attempted to take control of the nation and the state apparatus. It turned out not to be a shining path to anywhere.