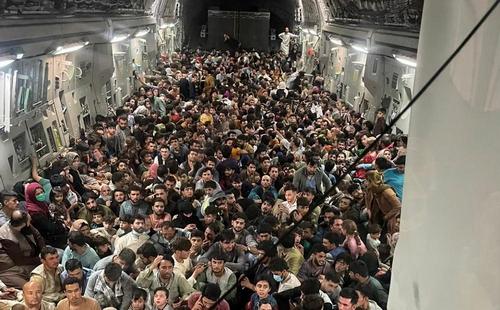 Afghanistan’s capital, Kabul, fell to the Taliban last month, with every other provincial city having already capitulated in what can only be described as a rout. Now the Taliban are in full control of Afghanistan. At the time of writing, the USA and the UK were rushing troops to facilitate the hurried evacuation of foreign nationals and diplomats from Kabul. Already Turkey, Iran and Tajikistan were reporting the arrival of refugees fleeing the threat of the Taliban.

The invasion of Afghanistan was the first action of America in what it called the ‘war against terror’ in response to the 9/11 attack in 2001. Afghanistan had been the base of operations for Al Qaida with the Taliban’s complicity. It has now become yet another embarrassing military defeat for the world’s greatest superpower.

In July as American forces departed Bagram Airbase without any advance notice to their Afghan allies, the United States’ top military general, Joint Chiefs of Staff Chairman General Mark Milley said to reporters, ‘This is going to be a test now, of the will and leadership of the Afghan people, the Afghan security forces and the government of Afghanistan’ (tinyurl.com/u3r7yns).

We now know the result. Despite being a formidable force of 2-300,000, well equipped with some of the best US weaponry and trained by expert NATO instructors, and despite receiving continued American air support, the Afghan National Government army and police have melted away with a surprising lack of resistance.

In addition, from 2001 to 2018 they each provided billions of dollars in foreign aid to Afghanistan which still remains one of the world’s poorest countries. The US donated $32.32bn, Germany gave $5.88bn, the UK’s contribution to aid was $4.79bn, Canada, $2.42bn, Italy, almost one billion and France, just over half a billion in foreign aid, with much of it going into the pockets of the profiteers and corrupt Afghan officials.

Of course, there will be other Great Powers ready and eager to take advantage of America’s defeat. After all, Afghanistan’s potential mineral wealth is still there to be mined and remains to be exploited. While China’s Belt and Road project will be viewing the trade routes through Afghanistan with great interest.

General McChrystal, the former Joint Special Operations Command and Afghanistan War commander, when asked if the ‘War on Terror’ had been worth it answered, ‘It would be impossible to argue that it was. The outcome just hasn’t been positive enough to argue that…’ (tinyurl.com/a9hvfv56).

While McChrystal may view the war through the lens of military strategy and the geopolitical context, socialists think about the human cost of this Afghan war and the consequences to come. What for governments is the price in the blood of the innocents, the pain of the wounded, the suffering of the displaced refugees?

An estimate is that the war has killed 171,000 to 174,000 people but the fatalities are an underestimate as deaths by disease, loss of access to food, water, infrastructure, and other indirect causes from the war are not fully included. Atrocities were conducted by all sides in this war and no country held the moral high ground although each claimed it.

There are millions of refugees from Afghanistan who comprise the largest refugee population in Asia, and the second largest in the world. Now those figures can be expected to rise sharply.

While some on the left may take a feeling of ‘schadenfreude’ from the West’s humiliation and claim another victory for ‘anti-imperialism’, our sympathy goes out to all our fellow workers.

A few Afghans who cooperated with the Afghan government and the occupation armies are being fast-tracked through the asylum-seeker process but many more who the Taliban, not known for their mercy, consider collaborators will face a very uncertain and insecure future. We can be sure that the Taliban will not be keeping to any conciliatory promises made to the USA back in 2020 during their peace talks at Doha.

Socialists can confidently predict that civilians will still be paying a terrible price for the actions of Osama Bin Laden back in 2001 and the American miscalculated response to it, and will continue to bear the cost of the ‘War on Terror’ for a long time to come. The best way to halt all the killing and maiming is to finish the fighting and we hope that the hand-over of power may reduce the extent of the conflict. But, as with all conflicts in capitalism, don’t expect any permanent end to human misery and tragedy.