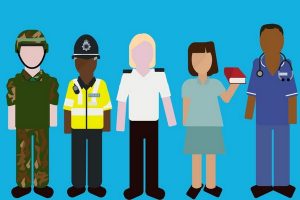 One effect of the whole Covid experience was so many people discovering the concept of key workers. With the country locked down it was shown just how much work it took to keep the population supplied with food and energy. Of course, this was a reduction to the very core of economic activities, and many of the furloughed or otherwise-reduced occupations remain essential in the longer term. But the experience overall did shed some light on how we could restructure work if we were to rid ourselves of the requirement for each employee to make a profit for an employer.

One consequence of that approach to organising work is that a number of people find themselves working more intensively, while other people are thrown into enforced idleness. One of the goals of the socialist movement is to decrease the burden of work and win more time for us to freely live and meet with each other. That would be a truly meaningful increase in human freedom.

Capitalism has promised to help lift that burden. There is an inbuilt incentive for capitalists to reduce labour. Being able to produce the same products as their rivals with less labour (by employing more or better machinery) enables capitalists to make higher profits. The result of reducing labour though is not leisure, but unemployment, and with unemployment comes a fall in wages generally. That in turn opens up the possibility of making previously uneconomic activities profitable. For example, while automated car-washes are available, when labour is cheap enough, a hand wash becomes more economically viable.

At the turn of the last century, some 1.4 million people were employed in UK agriculture. These days there are some 400,000. The trend worldwide is for agriculture to be shrinking as a share of overall labour activity.

This points to the possibility of lightening the burden of work, generally. Of the 30 million people in employment in the UK, just over 1 percent are involved in producing food. Many more are involved in unnecessary occupations. 60,000 people are employed by the HMRC: a society of common ownership would have no need for taxes or taxation administration. Likewise, we’d have no need for 79,000 to work in the Department for Work and Pensions. For each of those people, at least as many are employed as tax accountants, finance planners and benefits advisers.

If we directly put our efforts into producing useful wealth – food, clothing, housing – then we could create an abundance without needing the cheeseparing restrictions on wealth that capitalism demands. So, that being said, we could free up many of the 3.7 million people employed in retail, who are only there to deny people access to the goods unless they pay. Obviously, stacking shelves and doing stock checks are essential tasks, so not all those people could be redeployed to other work: but many of them might also be part of the 2.5 million underemployed in the UK (that is, people who would work more hours if they could find them).

1.4 million people work in finances and pensions (beyond those involved in taxation above), almost all of whom could do more useful productive work if the opportunity presented itself. We could also add in the 149,000 or so vigorous and able people being kept out of productive work by being in the armed forces.

Of course, these figures are simply coming from the UK alone. If we expand the scope, we can see that there are 15 million unemployed in the EU. Socialism is necessarily a worldwide system, and so will be able to utilise all of the skills and talents of all those millions of people, and thus allow them to develop themselves. The end of borders and sharing the wealth of the world would mean that people could come together to get the most out of our natural resources.

Obviously, there are real world limits to how we can apply labour; we need the productive resources that can accommodate all this available labour. The availability of machinery, land and transport will still limit who can work where, along with educational resources and geography.

After all, we can’t move whole populations easily (nor would we want to) and any economic activity would require pleasant homes for the workers carrying them out, and adequate transport links (after all, would we want to keep the dreary experience of the daily commute? One outcome of Covid has been to free some people from that by promoting home working).

For example, agriculture in the UK is currently administered via around 210,000 holdings. Each one of these must do its own accounts and paperwork (as well as compliance with regulations and environmental standards). There may well be good reasons (transport, environmental, etc.) to keep these as distinct holdings, and so, even with a reduced administrative burden, they may delimit how people can be deployed on the land most efficiently (and conversely, they could, much as when farmers buy or sell land today, be altered to make administration easier). To get the best out of this would require co-ordination.

That is why common ownership matters and can be the only basis on which we can get ourselves meaningful freedom. We can all become key workers, so that, by sharing the necessary burden of keeping society running, we can all also benefit from the free time that would result. People ask why would anyone work in socialism without wages or salaries? One answer is that if we can, say, reduce the working week to a couple of days each, why wouldn’t anyone work to secure their own and their friends and family’s access to the means to continue to be able to live well?

One Reply to “Key work, key workers and shorter hours”