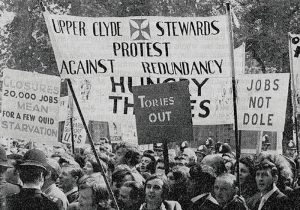 Revolt on the Clyde

We’ll occupy the yards and bring the government down! Only force will get us out! These were the sentiments expressed by the UCS shop steward’s convenor just after the government announced its refusal to help Upper Clyde Shipbuilders out of yet another financial difficulty.

These sentiments are understandable but the fact remains that the occupation of the shipyards — other, perhaps, than for a short while as a token demonstration of anger and protest at the way capitalism works — would be utterly futile. Those who urge the Clyde shipyard workers to believe that they can in this way coerce the government to preserve their jobs are cruelly and foolishly misleading them. That workers, especially in a declining industry like shipbuilding, have any “economic power” capable of overcoming the all-too-real and socially accepted political power of the government is a myth.

Locked in the yards with no work and no money, the workers would only be able to hold out for a short while. All the government would have to do would be to sit back and wait for them to surrender. They would not even have to consider using troops. The plain truth is that there is nothing the workers can do to save their jobs. The most they may be able to get is a short postponement or a little more redundancy pay. ( …)

As workers in an unprofitable industry about to lose their jobs, sooner or later, en masse or in dribs and drabs, they are victims of capitalism. They have our sympathy as fellow-workers and we wish them luck in using their bargaining strength to get the best of redundancy terms they can, but it would be dishonest of us to pretend — as do the loud-mouthed advocates of occupation, nationalisation, workers control, etc. — that there is any way out for them under capitalism. The way to fight back is to recognise the essentially defensive and limited nature of industrial action and to join in the political struggle for Socialism, to make all the means of production the common property of the community and to abolish forever the system of employment for wages.