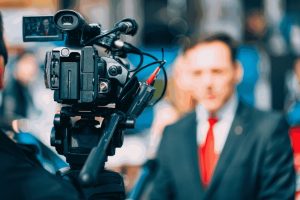 A new channel, GB News, brought in 336,000 people for its launch (Guardian, 14 June) – more than three times the number watching BBC News and more than seven times the number watching Sky News at the same time. It has a distinctive brand – as the name suggests, and as its chairman, Andrew Neil, made explicit, ‘We are proud to be British. The clue is in the name. And while we will never hold back from covering our country’s many flaws and problems, we will not come at every story with the conviction that Britain is always at fault, usually to blame when things go wrong, generally useless. We won’t forget what the B stands for in our title.’

There seems to have been a space in the media market for this, given the popularity it enjoyed at launch. What is more interesting is the quite overtly populist tone of the broadcast. Neil insists the channel is ‘dedicated to covering the news that matters to you and giving voice to those who felt sidelined or even silenced in our great national debates – because if it matters to you, it matters to us. GB News will not slavishly follow the existing news agenda.’ To be sure, there are good reasons for people to take that idea seriously. A significant portion of people in the UK do not trust, for instance, the BBC, to tell the truth ‘at all’ – 20 percent in December 2019 (YouGov, 16 December 2019). Contrast that with the 8 percent who took it to tell the truth ‘a great deal’. This will only gain more force since Laura Kuenssberg, the BBC political editor, was singled out by name by the Prime Minister’s ex-adviser, Dominic Cummings, in his criticism of the government’s handling of the pandemic (Daily Telegraph, 26 May). This is all good news for GB News, who want to primarily compete with the BBC.

The liberal press reacted as would be reasonable for them to, when faced with any sort of populist rhetoric: strident derision. The Guardian (12 June) gave the channel a one star out of five review, calling it ‘Utterly deadly stuff’. Stuart Jeffries continues in his review to ask a ‘philosophical question’ – ‘Can GB News change Britain’s news agenda if no one watches it? The answer, incredibly, is yes. […] [It] will be a success if it has reach rather than ratings.’ And it seems that it does have reach. His optimistic conclusion, nevertheless, is ‘A year tops.’ While Jeffries is quite right to point out the technical failures and the poor production quality, there does seem to be something important missed in just straightforwardly slating it. Why, if it is so bad, are people interested? There may be a genuine desire for explicitly political populist reporting in the UK. It would be hardly surprising if that were the case.

The political slant, besides the nationalism noted above, is one of focus on ‘woke’ moves made in mainstream politics and standing in opposition to them: ‘We will puncture the pomposity of our elites and politics, business, media and academia, and expose their growing promotion of cancel culture for the threat to free speech and democracy that it is.’ There is certainly a consistent narrative being spun here, and now there are serious questions arising about who exactly the ‘elites’ in question are. Of course, the narrative is helped by corporate advertisers, including Ikea and Octopus Energy, boycotting the channel (Independent, 16 June). In what might otherwise be described as the free market deciding to allocate funding elsewhere, Tory MP Craig Mackinlay explains that ‘This is all part of the closing down of free speech campaign which I am afraid we are seeing across our society. […] Corporates should do what they do – sell things rather than get involved with political debates’ (Daily Mail, 16 June). Of course, this does raise questions of where the funding does come from. It is a well-documented fact that the media relies on advertising much more heavily than it does on readership/viewership counts, money-wise.

Where’s their money coming from?

As one would expect, it is funded primarily by hedge funds, large conglomerates like Discovery, based in the UK, and investment firms based in the Middle East like Legatum. There seems to be very little that is proudly British vis-à-vis the financing of the programming. As Kevin Rawlinson and Jim Waterson write sharply, ‘Neil lists his main residence as France on official documents’ (Guardian, 14 June). And more or less for those reasons alone, it does not matter that there are voices from a range of political positions, including Gloria De Piero, who was a Shadow Minister under Jeremy Corbyn at one point, and Andrew Doyle, who voiced his support for Corbyn.

The ostensibly anti-establishment tone of the broadcast comes down to little if that is going to be sharply restricted by advertiser and shareholder pressures. As James Curran and Jean Seaton note on their history and analysis of the British press, the work that inspired Manufacturing Consent (Herman & Chomsky, 1988), ‘[The introduction of market forces] did not inaugurate a new era of press freedom and liberty; it established instead a new system of press censorship more effective than anything that had gone before [succeeding] where legal repression had failed in conscripting the press to the social order’ (Curran & Seaton, 2018, p. 5). Left-wing commentators mean nothing when advertiser pressures hold your programming to ransom any time inconvenient views are expressed. In Orwell’s still-insightful summary of the issues in his article on ‘The Freedom of the Press’, ‘Unpopular ideas can be silenced, and inconvenient facts kept dark, without the need for any official ban […] because of a general tacit agreement that “it wouldn’t do” to mention that particular fact’. And that is quite relevant when considering how much the anti-establishment rhetoric is substance and how much it is just rhetoric. If they are genuinely against business or the establishment generally, where are they getting their money from? Why would business agree to fund them in the first place?

The tone of the broadcast is highly misleading in two respects. One, just elaborated, that it is highly doubtful anything substantively in favour of the working class is going to be expressible on the platform – even if the viewers it draws are overwhelmingly ABC1 (82 percent). The second is the actual quality of the reporting. The channel insists on ‘character, flair, attitudes, opinion, and, yes, a sense of humour. […] Along the way we hope to have fun. […] GB News will aim to inform, inspire, and entertain.’ The blending of entertainment and reporting has complex effects – it cannot be taken as a straightforward good. Any further erosion of rational reflection on political issues, including the explicit introduction of the aim of entertainment into journalism, is likely to do little but distract from the matters at hand. It would be one thing to watch the channel because one agreed with the editorials, it would be another to watch it because it is funny – and be dragged into their narrative on merely that basis.

All of this does still leave the possibility open that the channel is knowingly run without regard to profit, just to introduce the narrative into public discourse. This would sound far-fetched, if it were not for the historical precedent. The incentives to do so are clear: further shift the opinion to the right, with the additional benefit of leading the viewership into a false sense of complacency about what is being said and done against the elite strata of society. Sky News, for instance, operates at a loss (Wired, 13 June). If there is anything to be said, then, against the view of news corporations as pure profit-making machines like any other, it is that the view is not cynical enough. Their existence may be justified by elites for ideological functions alone.

Bluster against the elite

At any rate, this much is clear: for all its bluster against the elites, Andrew Neil, ex-editor of The Times, chairman of The Spectator, BBC regular, and chairman of Press Holdings, is unlikely to say much of substance against them. That isn’t to be put down to his opinions – left-wingers are around in the ‘GB News Family’ too (gbnews.uk). But that doesn’t matter much when advertiser pressures are the same as any other news corporation, radically restricting the views expressible on air. And if it will have to fight for funding, as it looks like it might, there will be little choice but to pander to the elites. However noble your intentions (granting an enormous benefit of the doubt here), it means nothing if the market forces in question operate to reflect the interests of those who have the money. And they do operate in exactly that way, especially in matters of the media. If it is to last, it can only do so with utterly subservient editorials, carrying on restricting the spectrum of opinion, though it might well maintain all the rhetoric of ‘not slavishly [following] the existing news agenda.’ This doesn’t leave room for Stuart Jeffries’s conclusion of ‘A year, tops’. We should be so lucky.