Longstanding rivals ITV and the BBC have realised they share a common enemy in the online video channels and streaming services poaching their viewers. So they’ve uncharacteristically teamed up to try and compete against young upstarts like Netflix and Amazon Prime Video. Their ‘joint vision’ (as they put it) is Britbox, a video on demand channel launched in November 2019 in the UK, having previously been available in North America. Take out a subscription and you’ll have access to TV series from the archives which you’d have hoped would otherwise be on the BBC iPlayer or ITV Hub for free. Many of the two channels’ well-known dramas, sitcoms and documentaries are on Britbox (along with a little content from Channels 4 and 5), but there’s nothing too obscure, unfortunately. The range would be improved if they dug out some Play For Todays and World In Actions.

Britbox is aimed at fans of familiar old telly, but has recently branched out into premiering its own new material. So it’s pitching to its target audience by starting with something nostalgic, a revival of puppet-based satirical sketch show Spitting Image. Last seen on ITV in 1996, the series is best remembered for its 1980s heyday, with its increasingly-insane Margaret Thatcher, its tipsy Queen Mother and even chart-topping The Chicken Song. It probably got more people interested in current affairs and party politics than more serious-minded fare did, being one of those programmes regularly talked about in offices and playgrounds the morning after each episode.

Will Spitting Image’s reboot be as popular? Probably not, as its audience is limited to Britbox subscribers. Its makers are hoping for an international reach, though, and have brought in staff from American TV shows to widen its appeal stateside. As the new series is only a few episodes in, it’s too early for the production team to have hit their stride. To keep the sketches topical, they have to be written, blocked out and performed only a few days before transmission, which must be a challenge even without the impact of the pandemic on the TV industry. A lack of material definitely isn’t an issue, though, with the government’s (inevitable) inability to manage the virus situation, and the US Presidential election being obvious targets, along with celebs like Meghan Markle and ‘the husband formerly known as Prince’ Harry.

Just as important as the puppets are the scripts, which need to raise both a chuckle and a serious point. The sixteen writers working on the show haven’t yet been able to come up with much that shines, though. One of the better running gags has Donald Trump trying to make a deal with the Coronavirus, or ‘Corony’, as he calls the floating spiked blob which talks with him. ‘You’re everything I like. You’re tough, you’re sneaky, you’re an affront to humanity. I want you in my organisation’, coos Trump. In another skit, Boris Johnson wants to buy off the virus by getting it a seat in the House of Lords and then ends up having a fling with it. Other sketches fall flat: recently re-elected New Zealand Prime Minister Jacinda Ardern is presented as Mary Poppins running the perfect country, but where’s the satire in that? Boris Johnson is depicted as an oblivious mop-topped buffoon, so it’s hardly a caricature at all. And the slanging match between puppets of Donald Trump and Joe Biden wasn’t much different to their real televised ‘debate’. Sometimes it’s hard to tell whether the show isn’t being imaginative enough or if our rulers are too far removed from the rest of us to need satirising.

As its focus is on the puppets, Spitting Image ridicules society’s figureheads rather than criticises the system itself. And many of the lampooned luminaries haven’t minded this, and probably like the publicity. Old episodes uploaded to Britbox are introduced by some of the politicians immortalised in latex, including Neil Kinnock on the one hand and Ken Livingstone on the other. They reminisce about enjoying the show at the time, and add that having a puppet made of you was seen as a badge of honour. So, ‘80s Spitting Image wasn’t as anti-establishment as it might appear, and the new series doesn’t even push the boundaries as much as its predecessor. The puppets haven’t got out of hand. So far, the revival has only attracted any controversy with its mean-spirited caricature of environmental activist Greta Thunberg, rather than by saying anything which challenges the status quo. Satire risks just being a safety valve, where our frustrations about the system can be voiced in a contained, witty way. At its best, and Spitting Image sadly seldom gets there, satire highlights the absurdities of capitalist society, and thereby helps undermine it. 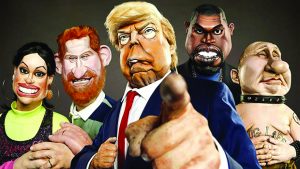