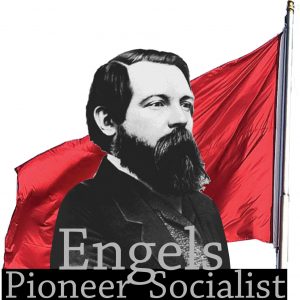 Friedrich Engels was born two hundred years ago in November 1820 in what is now called Wuppertal in Germany. He was the eldest son of a textile capitalist. Engels was trained for a career as a merchant, but in 1841 he went to Berlin and became closely involved with the Young Hegelians, a group of left-wing philosophers with whom Marx had also been involved. While in Berlin he did his military service in an artillery regiment, and for the rest of his life he took a keen interest in military matters. Later on, in the Marx household he was known as ‘The General’ and in the socialist movement as ‘Marx’s General’. In 1842 Engels became a socialist – before and independently of Marx – and went to Salford to work in his father’s business.

In England he became interested in the struggles of the English working class. His research resulted in The Condition of the Working Class in England, first published in German in 1845 and in English in 1887. It recorded the absolute poverty of the families in Manchester and their degrading working conditions. Based on first-hand observation and local sources it is still an important primary source for historians. This book greatly impressed Marx and contributed to what was to be their life-long friendship. In a preface for the 1892 edition, Engels wrote that ‘the most crying abuses described in this book have either disappeared or have been made less conspicuous.’ This is why ‘in 1844’ was then added to the book’s title. Engels went on to say:

‘It will be hardly necessary to point out that the general theoretical standpoint of this book – philosophical, economical, political – does not exactly coincide with my standpoint of to-day. Modern international Socialism, since fully developed as a science, chiefly and almost exclusively through the efforts of Marx, did not as yet exist in 1844’.

Engels first met Marx in Paris and agreed to produce a political satire aimed at the Young Hegelians: The Holy Family (1845). Engels and Marx then began writing The German Ideology in November 1845 and continued to work on it for nearly a year before it was abandoned unfinished, as Marx put it, to ‘the gnawing criticism of the mice’ (teeth marks of mice were subsequently found on the manuscript). This work contains an attack on the Young Hegelians (the German ideology in question) and in so doing they set out the basic principles of their materialist conception of history:

These key concepts would provide the guiding thread for their researches of the past and present. Engels would later label this materialism ‘historical materialism’, but it should be noted that the materialism here is not a philosophy of knowledge, as it is usually understood in philosophy. It is in the practical sense of the word (not in its acquisitive sense) that socialists are said to be materialists in outlook. This may look uncontroversial now, but at the time it was a revolutionary way of thinking. The widely influential German philosopher Hegel, for instance, conceived human history as the unfolding of an idea.

In 1848 the Manifesto of the Communist Party (now usually known as the Communist Manifesto) was published. Engels was not involved in writing the Manifesto but in the 1888 revised English edition he claimed joint authorship with Marx, who had died five years earlier. The revised edition sometimes improves on the original as, for example, this classic statement of the socialist revolution:

Engels had a better grasp of the English language than Marx, and he put it to good use in the many newspaper articles he wrote, some of which were published with Marx’s name as author. In the short book The Peasant War in Germany (1850) Engels drew comparisons between an early sixteenth-century uprising and the recent revolutions in Europe. It could also bear comparison between those revolutions and the Bolshevik revolution in Russia in 1917:

‘The worst thing that can befall a leader of an extreme party is to be compelled to take over a government in an epoch when the movement is not yet ripe for the domination of the class which he represents and for the realisation of the measures which that domination would imply’.

In 1850 Engels re-joined the family firm in Salford, where he stayed until 1870, helping Marx financially and journalistically. Engels also developed his own lines of interest, especially in the natural sciences, and one result of his studies was his notes published in 1925 as Dialectics of Nature. According to Tristram Hunt, a few years previously the manuscript was in the possession of Eduard Bernstein, acting as Engels’ literary executor, who sent it to Albert Einstein for comment. Einstein thought the science was confused (The Frock-Coated Communist: The Revolutionary Life of Friedrich Engels, 2009).

In 1878 he was able to retire and move to London. As Marx became less politically active due to ill health, Engels took on more responsibility for setting out what was becoming known as ‘Marxism’. In 1878 Herr Eugen Dühring’s Revolution in Science (subsequently abbreviated to Anti-Dühring) appeared. In an 1885 preface, two years after Marx’s death, Engels claimed that the arguments used against the German philosopher Dühring were mainly Marx’s ‘and only to an insignificant degree by myself’. Engels then said: ‘I read the whole manuscript to him before it was printed’. However, Terrell Carver has flagged this comment as odd (Engels: A Very Short Introduction, 2003). The implication of Engels’ comment is that Marx agreed with everything in the book. But with a large, closely argued book like this it seems implausible.

In Anti-Dühring Engels wrote that the dialectic is ‘the science of the universal laws of motion and evolution in nature, human society and thought’. Marx’s scattered comments on science and the dialectic could never be construed as making such a bold claim. That there are universal laws of motion in physics and of evolution in biology may be conceded, but it is more contentious to say that there are entirely equivalent laws of motion or evolution in human society. Like some other thinkers of the time, Engels had difficulty in disentangling philosophy from science.

Three chapters from Anti-Dühring were published as Socialism: Utopian and Scientific in 1880. This latter work proved to be immensely popular within the growing socialist movement as a general exposition of Marxism. In 1884 The Origin of the Family, Private Property and the State was written and published. This was based on a synopsis Marx had written on Ancient Society, a book by Lewis Henry Morgan that was published in 1877. The Origin takes an historical view of the family in relation to issues of class, female subjugation and private property. It also contains Engels’ classic socialist position on the state:

In Ludwig Feuerbach and the End of Classical German Philosophy (1888), Engels explained and defended his philosophy of nature. In his criticism of the German philosopher Feuerbach he wrote that a limitation of his ‘materialism lay in its inability to comprehend the universe as a process, as matter undergoing uninterrupted historical development’. Despite his claim to reject idealism, the universe as an unfolding of the idea is a return by Engels to the Hegelian philosophy of his youth in Germany,

After Marx’s death in 1883, Engels spent most of his time editing Marx’s notes for volumes two and three of Capital, published in 1885 and 1894, respectively. He devoted his last few years as an adviser to the parties of the Second International before dying of cancer in 1895. During their working life together, Engels always regarded himself as the junior partner. However, after Marx’s death and at a time of massively increased interest in Marxism, it fell to Engels to do the explaining. Most of it was done superbly, but he also produced a tendency towards ‘scientism’ – the belief that science also explains human political life. The term ‘scientific socialism’ is really just a philosophical viewpoint, and no less valid for all that.

From the twentieth century onwards, Engels’ political status has been raised to the equal of Marx. But there is nothing in the writings of Engels which justifies the existence of the political and social monstrosities erected in the names of Marx and Engels.