Cathy – no home to go to

Cathy – shall we ever forget – was the fair, slim, lovely young girl whose family and life 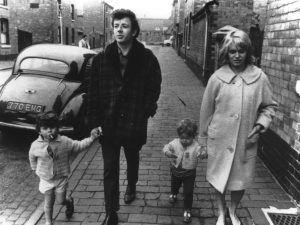 were wrecked simply because they could not find a home. They went from one hopeless situation to another, from verminous slum to wet tent to reception centre. She was parted from her husband and then from the last of her children. In the end she stood by the roadside with the passing lamps of the lorries playing across her face. She was going home, back the way she had come.

The play was an instant success, owing nothing to the fact that it was the work of an ex-Etonian. There were one or two rather half-hearted attempts to debunk it but the author had got in first; all the incidents in the play, it was announced at the beginning, had happened, in London, during the previous year. This was reality. Shocked, everyone agreed; something must be done about the homeless.

That was several years ago. Since then, there have been countless promises and schemes to deal with the problem. Statistics have been computed, weighted, published. Speeches galore have been made and applauded. And last month the latest figures came out, in the annual report of the grandly titled Department of Health and Social Security. (…) The report said that in 1969 20,820 people lived in emergency accommodation. In 1967 the figure was 16,176. which means that during the past two years the numbers of homeless people have risen by one third. (…)

The same month these figures were announced, saw the launch of Shelter, heralded with a procession of grim statistics: three million families in Britain in slums, near slums or in grossly overcrowded conditions; in Glasgow 100,000 unfit houses, in Liverpool 73,733; a waiting list in London of 150,000 families, in Birmingham 38,000. (…)

Poverty is ineradicable under capitalism but the system’s leaders can never admit their impotence to deal with it. They must go on. with their promises and their assertions and their programmes. Meanwhile, the harsh reality remains.