Cathy — no home to go to

Cathy — shall we ever forget — was the fair, slim, lovely young girl whose family and life were wrecked simply because they could not find a home. They went from one hopeless situation to another, from verminous slum to wet tent to reception centre. 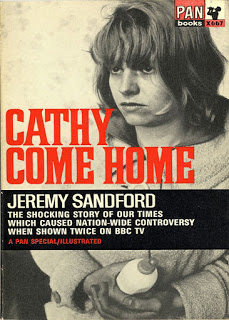 She was parted from her husband and then from the last of her children. In the end she stood by the roadside with the passing lamps of the lorries playing across her face. She was going home, back the way she had come.
The play was an instant success, owing nothing to the fact that it was the work of an ex-Etonian. There were one or two rather half-hearted attempts to debunk it but the author had got in first; all the incidents in the play, it was announced at the beginning, had happened, in London, during the previous year. This was reality. Shocked, everyone agreed; something must be done about the homeless.
That was several years ago. Since then, there have been countless promises and schemes to deal with the problem. Statistics have been computed, weighted, published. Speeches galore have been made and applauded. And last month the latest figures came out. in the annual report of the grandly titled Department of Health and Social Security.
That name in itself sounds enough to assure us all that health and security arc in good hands, that there is actually a department full of civil servants with higher civil servants at the head and a Minister of the Crown over them all to make sure that we are all healthy and secure. Surely, with such an army of talent and diligence to serve us, a little matter like the homeless would simply wither away?
As a matter of fact, this latest report includes a special write-up on the homeless, commissioned by Richard Crossman when he was at the head of the Department and before the electorate decided that they were so dissatisfied with the way the Labour government were dealing with these matters of health, security and so on that they would try the Tories again. And this write-up indicates that the late government have been less than successful in this field, where they made so much political capital while the Tories were last in power.
The report said that in 1969 20,820 people lived in emergency accommodation. In 1967 the figure was 16,176. which means that during the past two years the numbers of homeless people have risen by one third. Even a government like Wilson’s, which was constantly nagging about increasing production, must feel proud at such a steep rise in that particular field of production, even if it is the production of misery.
It is bad enough to contemplate the rise in the homeless. What is worse is to do so against the background of the political manipulation which goes on, the pledges which are given and the idea which all the capitalist parties put about, that the problem can be cleared up simply by carrying out one or two policies which are to be found in their programmes. On housing, there seems no end to the politicians’ cynicism.
In the 1966 election, the Labour Party programme said that their first priority was houses. Note that: their first priority. They intended to achieve a target of 500,000 houses a year by 1969/ 70, and then to go on to higher levels still. Three months later, in June 1966, the Ministry of Housing were admitting that the present target of 400,000 a year could not be met and by the end of the year there had been what the Daily Telegraph called a “drastic” fall in house building. (At the same time, despite all those homeless, the builders were complaining about a fall-off in demand).
The same month these figures were announced, saw the launch of Shelter, heralded with a procession of grim statistics: three million families in Britain in slums, near slums or in grossly overcrowded conditions; in Glasgow 100,000 unfit houses, in Liverpool 73,733; a waiting list in London of 150,000 families, in Birmingham 38,000. This, apparently, was a fall-off in demand.
Nevertheless, the Labour government bounced back. The very next month blunt Bob Mellish, who won a reputation for straight speaking because he was MP for a dockers’ constituency and who was at that time Parliamentary Secretary to the Ministry of Housing, lashed out with his own figures. He claimed a big advance in tackling the housing problem and audaciously predicted that London’s slums would be eradicated by 1972. Of course, at that time the Labour Party were rather worried about their chances in the elections to the GLC which were looming over an unpromising horizon but bluff Bob was too honest to be diverted by such considerations, wasn’t he?
About fourteen months later, in May 1968, Mellish’s Minister, Anthony Greenwood, enlarged on his claim. Perhaps, since Greenwood was a higher Minister than Mellish he thought it only right that he should be rather more ambitious. At any rate, he was not content to think just of London’s housing; he talked about ending the entire housing shortage “in about five years’ time”. He even went as far as to mention a surplus of housing, although he also said that nobody could forecast what the demand (that word again) would be in the 1970’s.
This startlingly confident approach was obviously considered a winner by the Labour government who, following Wilson’s dictum that in politics a week is a long time, must have thrilled to think how much longer is five years. In February 1969 Kenneth Robinson, who held the grand title of Minister of Planning and Land, coolly repeated the Greenwood line in the Commons:

By 1973 we should have a margin of about one million more houses than households. That should be just about enough nationally to give us the 5 per cent we want for mobility of labour and orderly working of the housing market. The national housing shortage should then be over . . .

One wonders what those builders, preoccupied with their visions of falling demand, thought about all this cheery talk of a surplus. Perhaps, keeping their heads like solid business men, they knew that it was all politicians’ blather. When the figures for 1969 housing came out. in January of this year, they showed a slump in the construction of new homes to 366,793 — the lowest total since the bad Tory days of 1963. Somehow, Greenwood could not bring himself once again to talk about ending the shortage; he fell back on the old Labour sport of Tory-bashing. “In the last five years,” he said, “there have been five houses built for every four built in the last five years of the previous government.” Which was not, probably, a remark which helped Labour win the last election.
And that brings us to the last batch of manifestoes, and the promises in them, again, to end the housing shortage. Labour’s are for the moment irrelevant; the Tories said that they will

. . . house the homeless . . . concentrate on slum clearance and . . . provide better housing for those many families living without modern amenities.

Good enough to warrant a standing ovation at a Tory conference, but in reality worth no more than all the other, similar pledges made before. (The Tory programme also said that the problem of the homeless “. . . is concealed by unrealistic official statistics. We will lay down a more sensible definition . . ” That must have got past the censor.)
And that brings us to the present, and to the latest figures of homeless. One criticism which was made of Cathy Come Home was that Cathy and her husband were such nice, good-looking, intelligent people that they did not represent a homeless family, who are usually of the more inadequate, lower paid variety of worker. There may be some point in this, but if there is it only highlights the fact that housing difficulties are part of a poverty problem and that the deeper the poverty the worse the housing situation.
Poverty is ineradicable under capitalism but the system’s leaders can never admit their impotence to deal with it. They must go on. with their promises and their assertions and their programmes. Meanwhile, the harsh reality remains. This is what Enoch Powell, who sometimes comes uncomfortably near the truth for the peace of mind of his fellow-misleaders, once said about it all:

For fifty years we — my brother politicians — have practised in regard to housing the oldest and cruellest of all the deceptions which politicians practise on their victims — to persuade them that we will make a thing cheap and plentiful for them by holding down the price of it by force. (The Guardian, 29 November 1968)

“Cruel . . . deception . . . victims . . .” What words to use, about the work of what is supposed to be an honourable profession. But what other words can be used, about the people who are prepared to lie and cheat to gain some advantage for their particular method of running capitalism, and when they coldly do so knowing that they are playing with the health and the happiness of human beings?
Capitalism has no home for Cathy, only endless misery and despair, with lives broken and all in the name of privilege. We are right to be angry but at the same time we must remember that there is work to be done, to set up the new society of abundance and hope.
Ivan.