Apparently, ‘The Islamic Republic of Iran’s blending of religion and Marxist negation of private property means that beneath its veneer of turbans, veils, mosques and prayers, it is a totalitarianism that shares much with Communist and Socialist states like the Soviet Union or current day Venezuela: Orwellian exploitation of workers in the name of the worker, repression of all basic rights, severe loss of livelihood, a kleptocratic class that maintains regime survival, and all manner of lies to sustain the myth of a just, egalitarian society battling the evil, capitalist West. Like in other anti-capitalist states, workers in Iran are prohibited from organizing. The assumption is that a Godly, Marxist state has elevated the “mostazafin,” or the downtrodden in whose name the revolution was waged, and is always and already providing for all. The regime pummels propaganda to maintain the myth of economic liberation but the truth is that Iranian workers are routinely denied wages, lack benefits, are forced into exploitative contracts and suffer from dangerous work conditions’ (nationalinterest.org, 27 June). This, save for the undoubted class division and mass suffering, is the kind of arrant nonsense which socialists encounter all too frequently in a propaganda version of Wack-A-Mole, and have challenged relentlessly for over one hundred years. Going back in time, ‘A Joker’s Conception of Socialism’ (Socialist Standard, December 1918) concerned drivel spouted on the subject by Winston Churchill.

We in the World Socialist Movement are not dogmatic masochists: we stick to our principles and the original meaning of socialism – common ownership, democratic control and production solely for use – because our socialist theory consistently provides an insightful analysis of the contradictions of capitalism, because of the repeated failure of the alternatives put into practice, and because the prospect of socialism as the meeting of our real needs provides the motivation. Occasionally, however, we find articles written by non-socialists which directly or otherwise support our case, such as those below.

‘Medical science has long been used for the consolidation of power rather than for solidarity with the oppressed. We see how Black mothers are blamed for their own mortality in childbirth and how starkly high rates of COVID death in Black communities are preposterously misattributed to differences in hormone receptors or clotting factors; all the while letting racism off the hook. We wish to remind fellow physicians that medical science has never been objective. It has never existed in a vacuum; there have and will always be social, political and legal ramifications of our work. Our assessments may be employed in criminal justice cases; our toxicology screens may have profound effects on the livelihood of patients; our diagnoses may perpetuate sexist and racist stereotypes. Our lack of ill intent cannot be our alibi—we must be accountable for not just our work but also how it is used, lest our medicine becomes the very weapon that harms. Medicine requires inclusion of the social context of disease in order to uphold its sacred oath of doing no harm. If we focus only on molecular pathways and neglect to articulate the role of structural inequities—of racism—in our country, our reports on the causes of death and injury in our patients will erase the roles of their oppressors’ (blogs.scientificamerican.com, 6 June). Here we can only quibble with Dr Ann Crawford-Roberts’ use of the phrase ‘our country’. Workers have no country: ‘Study Shows Richest 0.00025% Owns More Wealth Than Bottom 150 Million Americans’ (Common Dreams, 10 February, 2019).

Capitalism is THE pandemic

‘Once again, the U.S. is undergoing a media-driven COVID-19 scare after a “spike” in infections. But as we noted earlier this week, the number of cases depends on the amount of testing. The key gauge to watch is deaths. They’ve been falling since April, and there’s strong reason 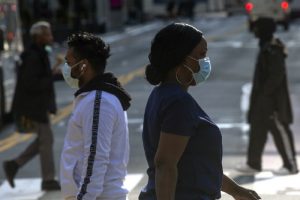 to believe they’re lower than the official count suggests. The dreaded Wuhan virus is no doubt a nasty bug, worthy of our vigilance and ongoing concern. That said, its virulence, as measured by the daily number of deaths, appears to be waning, as the chart with this piece, courtesy of the COVID-19 Tracking Project of the Atlantic, clearly shows. The average number of daily COVID-19 deaths on a weekly basis has fallen from a peak of just over 2,000 to 700 or so. That’s a roughly 65% decline’ (issuesinsights.com 25 June). The phrase lies, damned lies and statistics springs to mind here, but perhaps Dr Marx’s favourite – doubt everything – is more apposite, particularly where mainstream media is concerned.